MONROE'S LIVE is the place to be next Thursday as We Banjo 3 and Four Men and a Dog team up to see in the New Year in high style with an epic night of scintillating music and song. It will be a rare chance for Galway audiences to catch We Banjo 3 live this year as they are in huge demand internationally.

The (despite their name ) quartet's touring schedule in the coming months will bring them to the US, Germany, France, Britain, Norway, Denmark, and Canada. The group actually have three separate tours lined up in the US, including their debut appearance at the prestigious Merlefest in North Carolina, one of the greatest bluegrass festivals in America and an invitation-only event. Last month saw We Banjo 3 make their first visit to Japan where they played with Hiromitsu Agatsuma, virtuoso of the shamisen – a Japanese banjo - and recorded an album with leading Japanese folk group Humbert Humbert.

“It was amazing,” We Banjo 3’s Enda Scahill tells me. “We did a series of concerts with Humbert Humbert and recorded an album with them. Also, Hiromitsu Agatsuma is an amazing player, he was very well versed in jazz and improvisation and highly technical. The shamisen has three gut strings so it is slightly different to the Irish or American banjo. It is wooden and covered in animal skin, it’s played with a very hard plectrum, it looks like a hairbrush or shoehorn. Our Japanese tour was highly successful, we broke all sales records for the label.”

I ask Enda does he take a lot of interest in different versions of the banjo from around the world? “For sure,” he replies. “The banjo as we know it is originally an African instrument. Originally it would have been something like a gourd covered in animal skin with a wooden neck and catgut strings. Modern banjos are synthetic, they don’t have animal skins anymore - mind you, I do have a calf-skin one myself. What we are really interested in is all the different genres of music that have been influenced by banjo. The instrument developed through America which took it on as a folk instrument initially in minstrel music in the 1800s and later in bluegrass and the wider aspects of country music. In all of that melting pot it got introduced to Irish musicians in the early 1900s, though it was really Barney McKenna and The Dubliners that made it popular here. It’s had an interesting journey.”

Enda outlines the different ways the banjo is deployed in American and Irish folk music: “In Irish music it is very much a melody instrument so it would vary a lot in that aspect. If you look at old time and country music it is much more like a guitar, it’s like the rhythm section rather than at being the forefront playing melody. In bluegrass music it would be very much a melody instrument as well, you have brilliant musicians like Bela Fleck who play to such an incredibly high level. In Ireland if you look back, it wasn’t so well accepted in Irish music, but that has changed enormously in the last 20 years. It was always part of the furniture of American music.”

'The difference between bluegrass and Irish music is improvisation' 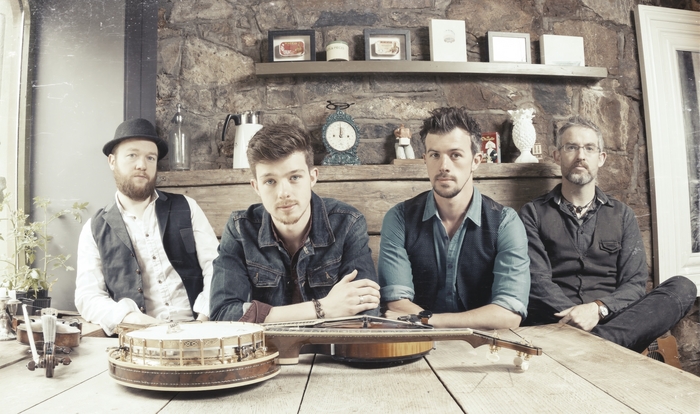 Enda readily acknowledges that his and the band’s trips to America and personal encounters with musicians there have been major influences on their development; “I was lucky, back in 2010 I spent a week in Nashville recording an album with an Irish band and musicians like Ricky Skaggs were on it, Brian Sutton who is a great flat-picking bluegrass guitarist, Aubrey Haynie who is the number one session fiddle player, he can play anything from bluegrass to Beyoncé. It was great to sit in a room with guys of that calibre and see the quality of their musicianship.

"The big difference between bluegrass and Irish music is the improvisational element. In Irish music you play a tune and it is played over a number of times, and while there might be some small variations, there isn’t the solo improvisation there. With bluegrass there might be one tune played 10 times and each person will improvise on the tune one time. The skill and musical knowledge involved in doing that really well was one of the biggest eye openers for us when we were in the States and seeing these guys first hand is their ability to turn a tune inside out, it’s almost veering into the neighbourhood of jazz ,the quality of their musical experience and knowledge. That’s something that we are trying to catch up on!”

We Banjo 3’s current album is the terrific Live in Galway, recorded in the Róisín Dubh last February and featuring the rousing addition of a horn section to the group’s sound. I enquire whether they might add brass to their next studio album.

“We’re going back into the studio a month from today and we have no tunes and no idea what we’re doing” Enda replies with a laugh. “It definitely will be another development, I don’t know yet if there will be brass on it – the brass is a brilliant live sound. The album will probably move toward the Cold Mountain kind of sound, very rootsy with lots of strings, but that might completely change once we get in the studio. We did a lot of gigs in the States last summer and we had a horn section for a number of them and they went down a storm, so we’re going back this summer and have a horn section already booked for the three biggest festivals. The sound will be developing again, where it is going to go will be very organic.”

“I can tell you what is going to be on our fifth album,” Enda suddenly adds. “After being in Japan, we’ll be going back there in two years’ time to do an east/west session and we’re wildly excited to do that album with Okinawan singers and Humbert Humbert. There is a host of traditional folk instruments in Japan. One of the links that we really liked in Japan is that they have this amazing ability to nurture their traditional folk music and culture, they really mind it, very much like ourselves.”

Plenty to look forward to then tours and recordings-wise for We Banjo 3. And first up is what will surely be a storming gig in Monroe's. Enda and his cohorts are looking forward to it keenly, especially having Four Men and a Dog on the bill.

“One of the things we have enjoyed and has excited us most is live collaboration," he says. "When we’re doing the festival circuit in the US having other bands jump up and do two or three sets together is the most exciting for live musicians so part of the gig in Monroe's will be that collaborative element. Four Men and a Dog, for me when I was growing up, they were the most influential band for young musicians. They featured the banjo and even had two banjos very prominently at one stage.

"They took Irish music and put a real element of rock’n’roll and a sprinkling of bluegrass and American folk in there as well. They were very innovative and exciting. Their ability to jump up onstage with another band and just let loose is what attracted us to the collaboration most of all. The gig isn’t going to be two bands playing a set each it will be very much the two bands bouncing off each other and the energy and fun that comes out of that and that is what we are most excited about and it’s what will make the gig really enjoyable.”