FOR THOSE of us blessed with kids, or who can borrow kids, a highlight of the year is the Baboró International Arts Festival for Children. So it was with great delight that your trusty correspondent attended the Monday evening launch for this year’s festival where details of the 2015 programme were unveiled.

A creative extravaganza for all ages and a journey for the heart and soul are in store with seven days of theatre, puppetry, dance, music, animation, exhibitions, and workshops, the festival will enthrall young and old alike from October 12 to 18 in venues throughout Galway. However, there was a sad note at the opening as we all missed the warmth and exuberance of Teenagh Cunningham, the festival’s erstwhile general manager, who died recently after a short illness.

Longtime Baboró director Lali Morris shared her thoughts on the festival as she steps down from her inspired stewardship; “Some of the biggest things that have happened to the festival is the fact of the type of programming that has evolved. In the beginning some of the shows we brought we had to be careful because children had not seen work like that, they had maybe gone to see panto or circus, and were shouting at the actors, but over time they realised this was something else and they began to appreciate what was happening.

"Being a multi arts festival we could bring in things like classical music, we introduced dance. I remember being on the phone to teachers assuring them that children would love it and that was proven true. It has been great bringing different art forms to kids and growing their awareness of the arts. A big part of our work has been mentoring young Irish artists and seeing them getting international invites. Those are big legacies I am very proud to have left behind. We are the country with most babies born in Europe and our amazing children we have to honour as citizens who have the right to the arts.”

Incoming eexcutive director, Aislinn Ní hEocha, shared her thoughts on the festival: “I am very privileged to be taking up this position and very conscious of what Lally has done before. She is respected internationally. That said, I am very excited to take on Baboró. I look forward to continuing its international programme and the mentoring that has been part of Baboró in terms of supporting young artists. I also would like to enhance its role in arts education and teaching. The festival will not be standing still and there are a lot of different avenues I would like to explore!” 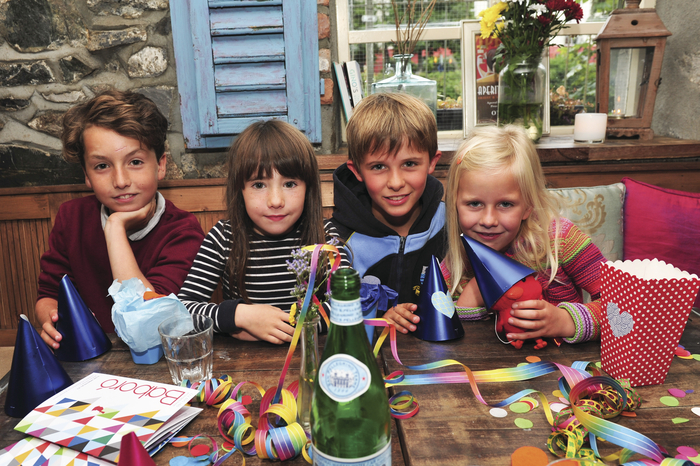 This year’s programme features work from Ireland, Belgium, Canada, Italy, Scotland, Spain, and Ukraine. Mermaid Theatre of Nova Scotia make a welcome return to Baboró with the Irish premiere of their stage adaptation of one of the world’s best-loved children’s stories, Guess How Much I Love You. Written by Irish author Sam McBratney, and beautifully illustrated by Anita Jeram, this award-winning classic has captured the hearts of children and adults worldwide. This year also marks the book’s 20th anniversary. Guess How Much I Love You is presented together with Anita Jeram’s touching I Love My Little Storybook, which celebrates the joy of reading.

El Patio Teatro from Spain bring their beautiful love story A Mano The Mimirichi Clown and Pantomime Theatre from Ukraine bring their crazy clowns for some even crazier fun in Paper World. Audiences can expect some hilarious interactions as they’re transported to a new world where imaginations run wild. Rosalind Sydney from Scotland presents Up To Speed, a funny and touching story about the power of friendship and the importance of being yourself.

The Irish programme features the world premiere of The Wolf and Peter from the award-winning CoisCéim Dance Theatre. Prokofiev’s Peter and the Wolf is one of the most famous pieces of music ever written and this reimagining of a timeless story of courage and imagination is now told through the eyes of the Wolf. Combining dance and live music, the extraordinary pianist Conor Linehan will play live on stage, The Wolf and Peter takes children and their families on a thrilling adventure with the classic characters Bird, Cat, Duck, Grandfather, Hunters, Peter, and of course the Wolf. Venue sponsorship at The Town Hall Theatre is provided by KBC.

The Abbey Theatre brings another modern classic to life in their tender monologue Me, Michael. This exhilarating tale full of music and dance is a lively reframing of Brian Friel’s Dancing at Lughnasa, and tells the story of a young boy living in Donegal. Paul Curley bakes up a storm in his lively and interactive show Bake! where everyone can get in on the act of sifting flour and beating eggs as preparations get underway for a royal birthday celebration. Galway’s Fíbín Theatre Company present Saol Faoi Shráid, based on the characters from the popular TG4 show of the same name. Expect tons of singing and great interaction as Ríbín and Glibín go in search of treasure.

Presented by Baboró in partnership with Roscommon Arts Centre and Galway Arts Centre, A History of Play is an art exhibition that invites you to come, stay, and play. Inspired by the educational play objects devised by educator and inventor of Kindergarten, Fredrich Fröbel, artist Eamon O’Kane creates an interactive installation of art, architecutre and design. Consisting of educational play materials known as Fröbel Gifts, these are used to unlock creativity by teaching children about three dimensionsal shapes and colours, and their relationship to the environment and nature.

The Sky Dome Mobile Planetarium from the Sky Dome Academy offers the chance to experience the wonder of the cosmos where you can explore planets, moons, stars and galaxies. This is sure to spark an interest in science and change your view of the night sky forever.

There’s also the Book Doctor who will write a prescription for your next read and there’s an opportunity to get hands-on experience in making your very own stop motion movie with your favourite Lego character in Brick Flicks from Createschool. The Side by Side series includes a variety of family and teacher workshops including a puppetry workshop from Mermaid Theatre and a dance workshop from CoisCéim. Family and schools workshops, presented in partnership with Irish Design 2015, include Creative Textiles with textile and interior designer Tina O’Rourke and Creating Wearable Design with jewellery designer Natasha Heaslip. This year’s festival will culminate in a disco in the iconic Seapoint Ballroom where DJ Will Softly and Dancer Gigi from Kidisco will bring families to the four corners of the globe on a non-stop musical and dance extravaganza.