LIKE THE festive lights on Shop Street and Quay Street and the Continental Market and big wheel in Eyre Square, The Renmore Pantomime features prominently in the mind of Galwegians when it comes to Christmas in the city. Having celebrated its 40th anniversary in October, The Renmore Panto has been a cornerstone in the local community, raising money for a selected charity while providing a spectacular feast of entertainment which the whole family can enjoy.

This year's offering is Aladdin which opens at the Town Hall Theatre on Sunday December 29. The panto's production of the famous 1992 animated feature film is apt considering a live action interpretation was released into cinemas in May this year and was the seventh highest grossing film of 2019. Declan J Gardiner who is playing the famed street rat from Agrabah says preparations have been taken up a notch this week.

"[Rehearsals] have been good," he says. "We have really got in the swing of things this week as dancers, the tweens, and the Smurfs, all of us have started rehearsing together. Up to now we have been preparing in our own groups. But we are working well and the excitement is building for the opening night."

Aladdin is scripted by Peter Kennedy, and as ever, he adds an entertaining twist to whichever classic fairytale the panto is staging and Gardiner reveals this year's panto will be full of surprises for the audience as well as performers. "Peter is an absolute powerhouse on stage. He keeps you on your toes, feeding you with different lines on stage so you better be ready for him. I started out [performing] at 10 in my local group in Loughrea and this is where I first met Peter so it is great to be working with him 25 years on.

'There is always surprise in panto' 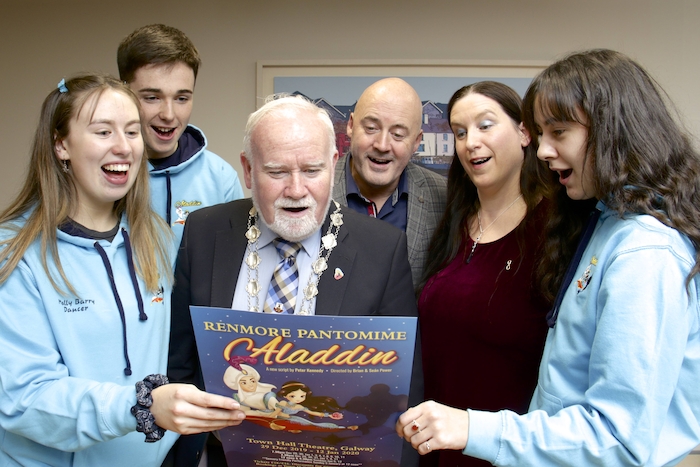 "Storywise there are definitely surprises. There is always surprise in panto. With the movie coming out [in May], it gives the story fresh eyes on the Disney version, so there is a balance to be seen in what people expect and providing something different. There are plenty of fun characters. I think the Mummy character - I think audience will especially love it.

"As the choreographer [as well] I have been working with musical director Ger Madden on what dances and music we will come up with for the panto. Dancewise there will be a bit of everything with the Charleston, some street dance, and contemporary dance. With regards to music, there be chart music so if the children maybe can't keep up with dialogue, there will be a lot of songs they can sing a long too. [There will be] music from the past which the parents will know, just real feel good music which will put the audience in a good mood."

Playing Gardiner's love interest, Jasmine, is Jenni Flaherty. Somewhat a veteran with the Renmore Panto, Flaherty played one of the genies of the lamp alongside Gardiner when Aladdin came to the Town Hall Theatre 10 years ago. Gardiner says having a co-lead with whom he has been performing for a number of years is one that fills him with confidence.

"It is brilliant working with Jenni. I have known her for a long time. When The Renmore Panto produced Aladdin 10 years ago, Jenni and myself played the genies of the lamp so we have been performing with each other for a while now. It is reassuring to have her out on the stage with me because as the lead, you are very busy as you in every scene so there is a pressure [to perform well] but with her out there you definitely feel safe. She is a wonderful Jasmine and has an amazing voice. She could sing the entire show herself she is that good."

'That's the magic of panto' 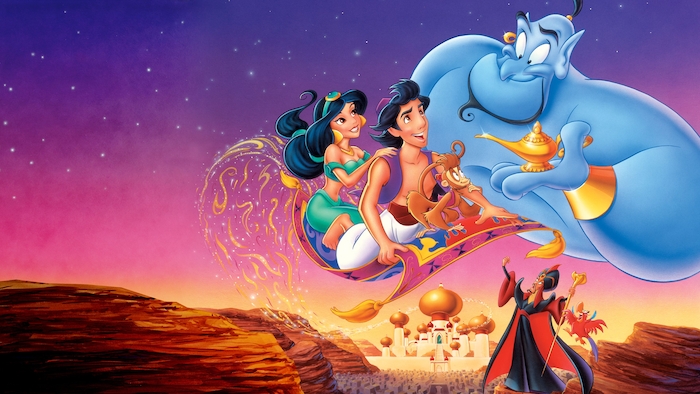 Gardiner's journey in the performing arts has seen him play the role of student, performer, and teacher over 25 years including stints in Dublin and London. Currently teaching at the Power Performance Academy, the Q Club at Rahoon-Newcastle Hurling Club, and Gort Stars Youth Club, he shares his thoughts on the contrast between doing musicals and pantos.

"From the choreography point of view there is a big difference between a musical and a panto. When it comes to a musical you would have to stick to a specific genre, you would follow a strict line. So depending on the setting of the musical, I will have to choreograph the dances and music from the time.

"Whereas with panto, you are really given free range [to choreograph]. Panto allows you to be really creative. There is crowd participation with panto which you would not get in musicals. That's the magic of panto. It is all about fun and enjoying yourself which I think is a really lovely aspect. You will have screaming children shouting 'He's behind you!' enjoying themselves but equally adults will get involved so all of the family can really enjoy [panto]."

Having been involved with the Renmore Panto for 12 years, he says the passion for performing from those involved with society is as strong as it was when started. "Once again this year, it has been a overall great experience working with Renmore panto. Joe McCarthy, the founder of the society, still comes in [to rehearsals], smiling ear to ear, after being here for more than 40 years. There are so many great people here. It is a special place to be."

Aladdin runs at the Town Hall Theatre from Sunday December 29 to Sunday January 12. Tickets are available from the Town Hall on 091 - 569777 and www.tht.ie