WHEN LANKUM take to the stage of the Róisín Dubh on New Year's Eve, they can look back on a year where they cemented their reputation as the most vital force currently at work in Irish folk and traditional music.

They will also be able to look out at an audience among the most diverse enjoyed by any Irish band. At a typical Lankum gig, the age ranges from 20-something hipsters, to folk music veterans in their seventies. “That’s the amazing thing, it’s a bit mad," Darragh Lynch, the band's guitarist tells me during our Wednesday afternoon interview. "We’ve noticed that in, say, London, we get the London-Irish, old folk heads from the sixties and seventies, punks and metallers, and hipsters."

Lankum - Ian Lynch (vocals/uilleann pipes ), Radie Peat (vocal/concertina ), Cormac MacDiarmada (vocals/fiddle ), and Darragh - do, as BBC broadcaster Mark Radcliffe correctly noted, "mark a turning point in folk", while The Guardian declared them, "the most convincing folk band to come out of Ireland in years". Such acclaim was justified by the released the quartet's third album, The Livelong Day, via Rough Trade in October.

Opening with 'The Wild Rover' was a statement of intent on just who and what this band are. A most unexpected re-imagining of a folk standard, it came in an arrangement which fully realised the sound they had been aiming for. Best known as a rambunctious, unrepentant, look back at a hard drinking life, Lankum's take was instead, a pained look at a life made wretched by alcohol abuse, backed by droning, ambient, humming sounds, which built to a crescendo by turns thrilling and unsettling.

“There are songs you’ve heard a million times and you wouldn’t be bothered if you never heard them again," Darragh says. "They’ve been so done to death, and are associated with paddywhackery. Then you hear a different version, or done in a way that you hear it as though you’ve never heard it before, and it resonates enormously with you.

"We first heard this version by Donal McGuire, a singer from Drogheda. Radie and Ian heard him singing it with a different melody, and we were struck by the different words and the extra verse at the end. We started singing it after that and were chipping away at it for months. Ian and Radie were singing it, then Cormac and Ian tried it, before we settled on Radie doing it solo, and the rest of us building to that big crescendo at the end.” 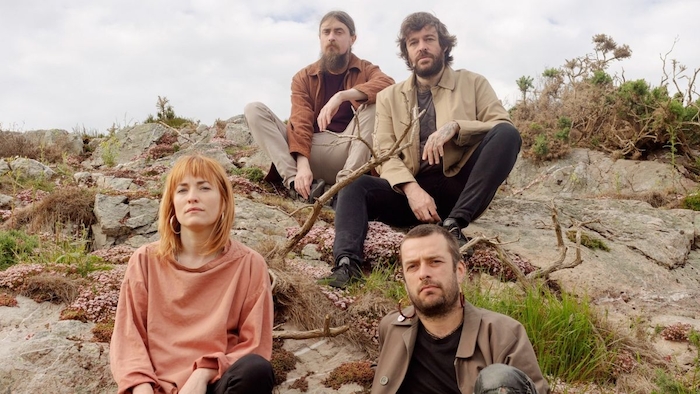 The song's ambient, ominously humming sound, where one chord change can sound momentous, powerful, runs throughout The Lifelong Day, and Darragh credits much of that to the band's sound engineer John ‘Spud’ Murphy.

“That’s the sound we were going for, and on the previous albums as well, but this time we really got it," says Darragh. "When you’re playing on acoustic instruments, it’s not easy to get a big, immersive sound. That’s where 'Spud’ comes in. He’s basically member No 5 in the band, a phenomenal technical guy and amazingly creative.

'‘I’ll give you a subject to write about, and you give me one to write about.’ Ian gave her Violet Gibson, the Irishwoman who tried to assassinate Mussolini, and she gave him the Wrens of the Curragh'

"To arrange ‘The Wild Rover’, there were four mics in front of Radie’s face to capture the width and breadth of her voice, and he got us to put in pianos at the end, Russian accordions, cellos, violas. It’s all mastered so that it sounds like one instrument.”

While Lankum are not overly political, their music is politically aware - their roots are in the punk movement. Songs like Katie Cruel’ deal with prejudice against itinerant peoples and outsiders, as well as anti-Semitism, and ‘Hunting The Wren’, which brings in themes of misogyny, sexism, and the marginalisation of women. That latter song was written by Ian Lynch, and arose from a challenge set him by folk singer-songwriter Lisa O'Neill.

''The Young People' came to me one morning as I woke up. I don’t know if it was my brain making a composite of phrases and imagery common in traditional and folk songs, like apples and stone walls, but it all fed into this one little chorus'

"Lisa was taking part in an event at the Abbey Theatre, Pat McCabe, and others were involved as well, and the idea was that the performers had to compose material specially for the night," Darragh explains. "Lisa asked if he wanted to be involved. Ian said it sounded great, but Lisa said, ‘The only thing is you have to write a song for it.’ There was only two weeks to go, so Ian wasn’t sure, so Lisa said ‘I’ll give you a subject to write about, and you give me one to write about.’ Ian gave her Violet Gibson, the Irishwoman who tried to assassinate Mussolini, and she gave him the Wrens of the Curragh.”

The Wrens were a commune of women who lived in the Curragh in the 1800s, however they were a despised and marginalised presence, and suffered persecution as a result. “From what I can gather, there is only one source on this, from a newspaper of the time," says Darragh. "A journalist went to where they lived and wrote about them. It seems they were treated very badly and were despised by the local community and the priests.”

'We’re all into Krautrock. One of our favourite tracks is NEU!’s ‘Hallogallo’. It’s amazing to listen to, you forget where it starts and ends, it’s like being in a river'

A highlight of recent Lankum concerts has been 'The Young People'. Despite it's subject matter of suicide among young men, the circularity of its music, the gentleness of its atmosphere, and the compassion in the voices of all four Lankum members as they join in the chorus gives it a glimmer of hope and comfort - qualities which together make it an almost communal experience between band and audience.

It was penned by Darragh, and it came to him in the same way 'Satisfaction' came to Keith Richards and 'Oh! You Pretty Things' came to David Bowie - in a dream. “The chords came to me one morning as I woke up," he says. "I was still half-asleep but it was in my head. I don’t know if it was my brain making a composite of phrases and imagery common in traditional and folk songs, like apples and stone walls, but it all fed into this one little chorus.

"I decided to grab my phone and record it. It can happen that you go to brush your teeth, or have breakfast, and say ‘I’ll record that later’ and by the time you get around to it, you’ve forgotten what the idea was, so you have to record it straight away."

Indeed 'The Young People', as Darragh reveals, has a surprising, unexpected, source of inspiration. “We’re all very into Krautrock and one of our favourite tracks is NEU!’s ‘Hallogallo’," he says. "It’s amazing to listen to, you forget where it starts and ends, it’s like being in a river. We included a lot of those elements in our arrangement.”

With The Livelong Day cementing Lankum's reputation as this era's Planxty, how do they see their art evolving, as they look to the future? “Even looking back to where we started this album, it’s very different to what we thought it would sound like," says Darragh. "The first album we had the arrangements and we stuck to them, the second album we had the arrangements partially worked out, but wanted to experiment with them a bit, and see what comes out at the other end. This album is mostly away from what we predicted ourselves it would sound like, but we were confident enough to say, ‘Let’s see what happens.’"

Lankum play the Róisín Dubh on Tuesday December 31. Support is from Junior Brother. Doors are at 8.30pm. Tickets are available from www.roisindubh.net; [email protected], Shop Street; and the Róisín Dubh.