THE FIRST paragraph of this fascinating book reads: “Galway is unique among Irish cities in possessing a map that not just provides a bird’s-eye view of the urban landscape at a critical juncture in its history, but also offers insights into cultural, socio-political, and religious outlooks of the town’s ruling elite at this time. The printed map is a glorification of Galway, a celebration of its importance, wealth and power in the years immediately preceding its surrender to parliamentary forces in 1652. That it was made to impress is evinced not only in the visual impact of the heraldic embellishments and decorative artistry employed but also in the wealth of detail recorded, much of which might otherwise remain unknown."

Walsh says that while the map might be unique with regards to it subject matter, this type of pictorial map was common among the wealthier classes during the 16th /17th centuries.

The book comprises 38 extracts and commentaries from the map, as well as 41 figures, and brings the reader on an almost intimate tour of the city as it was then - and to a surprising extent as it is now. To experience this, take an early morning walk through the middle of Galway. It will greatly enhance the enjoyment and understanding of Paul Walsh’s book. 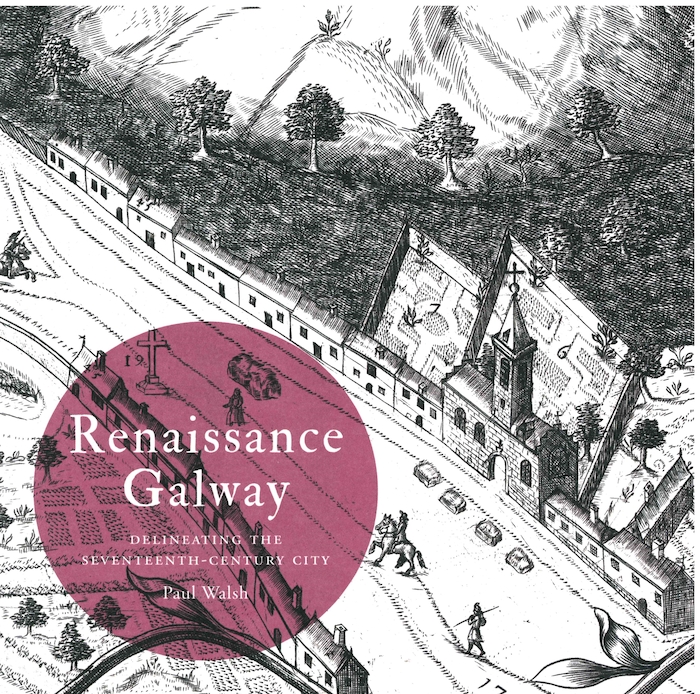 Along with the wonderful architecture of the late Mediaeval city, one of the book's more interesting elements is its many examples of the daily lives of the people, notably in the representation of the world outside the city walls where “the countryside is enlivened with vignettes of ordinary men and women going about their everyday lives”.

Here we have representations of a bountiful hinterland which supplies all the necessities of life. We see people coming to market with carts laden with produce and fishermen coming home with what appears to be boats full of fish.

While major sections of the book deal with the building of bastioned defences and mural fortifications - a defining characteristic of a town in the mediaeval and early modern periods - the compilers of the map were keen to highlight the seven marketplaces that dotted the city. “These specialised in the sale of commodities that included corn, fresh – and salt water fish, meat, cattle and horses." These market places also included centres of administrative and social control.

However all was not war and work. There are references to boys swimming in the Corrib and jousting on The Green (now Eyre Square ) which served as a place for assembly and games.

Renaissance Galway is beautifully designed and a real delight to browse through, every page adding to our knowledge and understanding of the Galway we know and love. It is a treasure trove for the reader interested in the political and social history of Galway during the 17th century and the ideal book for a good browse.