WHAT IF Ireland was still part of the United Kingdom? What if Home Rule had passed in 1914? What would Ireland be today in that case? These are some of the questions posed in The Alternative.

The Alternative by Michael Patrick and Oisín Kearney, will be presented by Fishamble: The New Play Company in the Town Hall Theatre on Tuesday October 1 at 8pm.

It is the eve of the Referendum. British prime minister Ursula Lysaght is returning to her hometown of Dublin to convince voters to Remain. With the threat of chaos in the streets, and personal conflict behind the scenes, the final debate is set to begin at BBC Dublin: Should Ireland leave the UK?

"We wanted to write a play that would reflect the tumultuous political climate we are living in," said Patrick and Kearney. "Something that would deal with the big questions over the history and future of Ireland and Irish identity through satire, while having loads of fun with an alternate world."

Kearney and Patrick [pictured below] co-wrote the award-winning My Left Nut, which was developed through the Show In A Bag programme run by Fishamble, The ITI, and The Dublin Fringe. They are also part of the BBC Belfast Voices screenwriting scheme, have written for BBC NI's Soft Border Patrol, and were shortlisted to write for BBC 3's The Break. 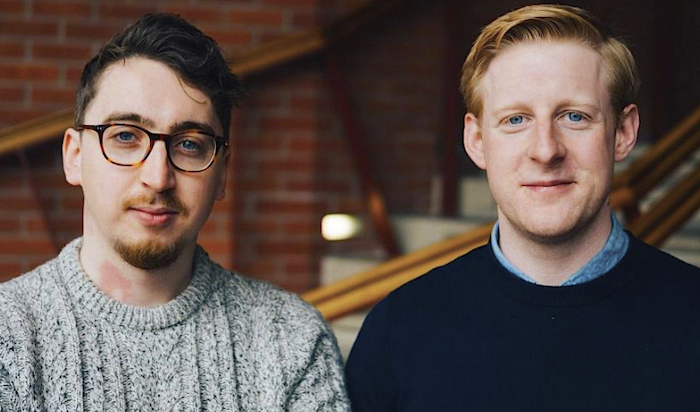 The Alternative was chosen as the Play For Ireland after a two-year process of open submissions and workshops with Fishamble. The cast is Karen Ardiff, Lorcan Cranitch, Maeve Fitzgerald, Fionntán Larney, Rory Nolan, Rachel O’Byrne, and Arthur Riordan.