THUNDER ROAD opens at Jim's mother's funeral. He is the only one of her three children to attend and he is very emotional. He suffers though an ill prepared eulogy, and begins to look deranged when going off on tangents about himself.

It is a 12 minute shot with no cuts and ends with Jim attempting an interpretative dance to his mother's favourite song, 'Thunder Road'. After the funeral Jim’s life goes from bad to worse. He is already in the process of divorce (his funeral antics do not help him in court ) and refusing to take off leave from work for bereavement. At the same time his distant, awkward, teenage daughter is pulling away from him and becoming a problem child in school. Jim is beginning to crack.

Based on a short film of the same name, Thunder Road is written, directed, and stars Jim Cunningham. Its a tragic-comedy in the vein of Chris Morris or David Brent with some Alan Partridge thrown in. It is not nearly as funny as any of these (purposefully ) but you can see the influences. It is a difficult watch and sometimes reminded me of cartoon from the 1990s called Stressed Eric. Jim can be very unsympathetic, he is the definition of your own worst enemy, but slowly you begin to develop empathy for him.

'The movie was made on a shoestring budget and financed via Kickstarter. From there it went on to win the jury prize at South by Southwest festival'

In a way the film gives us permission to like him by giving him a genuine ally and friend in his partner Nate. At first there seems to be hostility between them, but what is actually on screen is the most genuine and realistic portrayal of modern male friendship. Nate see’s him self sabotaging his life and knows there is nothing he can say, just try to be there for him. I found their relationship very moving.

Cummings gives a really remarkable performance full of pathos and humour. It will be interesting to see if he can carry over this level of acting to a film not directed or written by himself. It actually reminded me a lot of Fleabag, and the way Phoebe Waller Bridges had the character of Fleabag so perfect due to playing her on stage for so many years. Cummings has been living with this character for a long time from his short to this feature film. The movie was made on a shoestring budget and financed via Kickstarter. From there it went on to win the jury prize at South by Southwest festival. 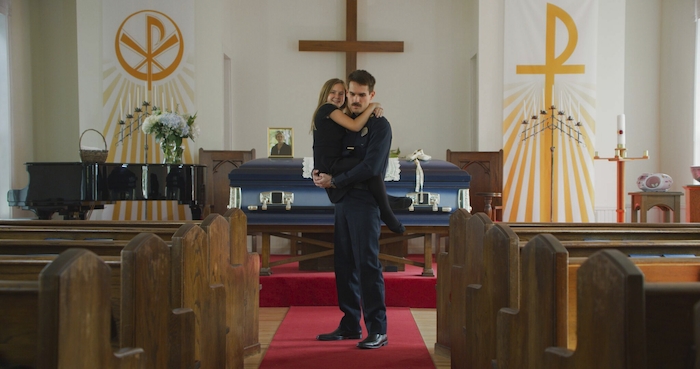 I loved this movie, indeed I have not seen anything like it in a long time. I see it is getting mixed reviews but would implore you to see it in the cinema. The last two weeks I saw two of literally the worst blockbusters I’ve ever seen in Godzilla and the latest X-Men film. Those films have a combined budget of $400 million. Thunder Road was made for $200,000 and is a genuinely powerful film. Try to see if if you can