Searching further, it emerges that Vukasin Nedeljkovic “is a PhD student at the Centre for Transcultural Research and Media Practice at Dublin Institute of Technology, who has initiated a multidisciplinary project, Asylum Archive, to collaborate with “asylum seekers, artists, academics, civil society activists, and immigration lawyers amongst others, with a view to creating an interactive documentary cross-platform online resource critically foregrounding accounts of exile, displacement trauma and memory”.

The book consists of essays by Ronit Lentin ('Disavowing Incarceration: Asylum Archive Making Ireland’s Direct Provision System Visible' ); Charlotte McIvor ('The Power of the Everyday: Looking Away from Bodies and Towards Ephemera in Asylum Archive ); Anne Mulhall ('On Asylum Archive' ); Karen Trill ('Active Witnessing: Learning from Asylum Archive' ), and a collection of 159 photographs of centres of direct provision edited by Nedeljkovic.

'With the setting up of direct provision centres, the Government was adopting the same policy of coercive incarceration as adopted by the workhouse system set up by the English in 1838'

In the introductory essay, Ronit Lentin writes: “Since November 1999 asylum seekers in Ireland have been incarcerated and dispersed to Direct Provision centres, often in remote locations throughout the country, managed by for-profit companies under the supervision of the Reception and Integration Agency (RIA ), an arm of the Department of Justice and Equality. Residents get bed and board, are not allowed to work or access to third level education, and are given a small weekly “residual income maintenance payment to cover personal requisites of €21.60 per person."

This payment was raised in 2017 although it is unclear in the context to what, Lenit goes on to tell us that in January 2018 there were 4,759 people in 32 direct provision centres. Seven of the centres are State owned and the others are operated by for-profit companies, which in 2016 were paid €64.13 million. 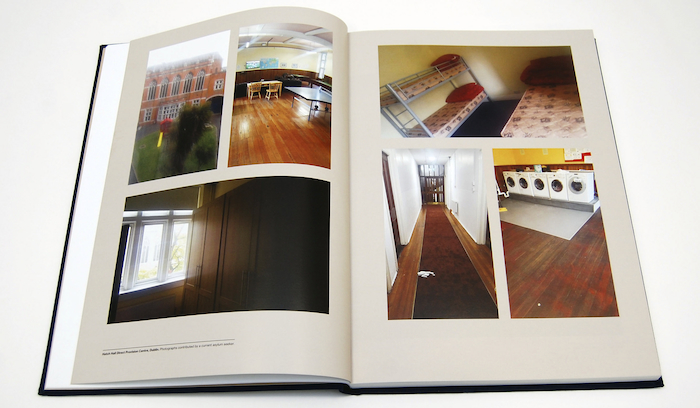 The main theme of Lentin’s essay, and the others that follow it, is that with the setting up of direct provision centres, the Government was adopting the same policy of coercive incarceration as adopted by the workhouse system set up by the English in 1838, and which continued after Ireland gained independence with the mental health asylums, mother and baby homes, Magdalene laundries, and industrial schools.

All of these essays are written in an obtuse style which is not easily understood. By contrast the 159 photographs bear witness to the bleak conditions in which our refugees are housed. The buildings are run down, uninviting, badly furnished, if furnished at all, and barely fit for human occupation. The depressing atmosphere of the buildings is heightened by the lack of any inhabitants in the photographs.

Asylum Archive is an important book, bearing witness to our Government’s (and by extension our own ) indifference to the plight of refugees. It is perhaps an opportunity missed in that the language of the essays is academic and we do not hear from the refugees themselves. Nonetheless it is a book which deserves our attention and maybe ignite in us the will to treat our refugees in the same way we expect our own emigrants to be treated.