THE FIRST chapter of Over The Backyard Wall - A Memory Book, Thomas Kilroy’s 'autobiography', is entitled 'The Eye of Memory' and opens thus: “I have been asked more than once to write a memoir and I’ve always had to say no. I couldn’t do it. I could scarcely remember what happened the previous week, never mind the distant past, at least with any degree of accuracy. Then in 2006, at the age of seventy-two, something odd happened to me - rather, something routine occurred - but it had an odd result. I had a cataract operation in both eyes.”

The “odd result” of the operation was the startling effect it had on his memory: “I began to see memories as something directly in front of me, not something behind me in the past.” The book is written in an effort to understand these “memories” and the place in which the writer found himself. It is also about “escape, self-discovery, the struggle I had to contend with the rigid culture surrounding me as a child”.

Kilroy gives us an extraordinary Pandora’s box of memories and perspectives, along with vivid descriptions of a country struggling with its new independence, and two short stories (offered as a kind of dessert ), anything but a memoir or autobiography. The narrative voice is imbued with an slightly awkward self-consciousness that is as intriguing as it is charming and unexpected. 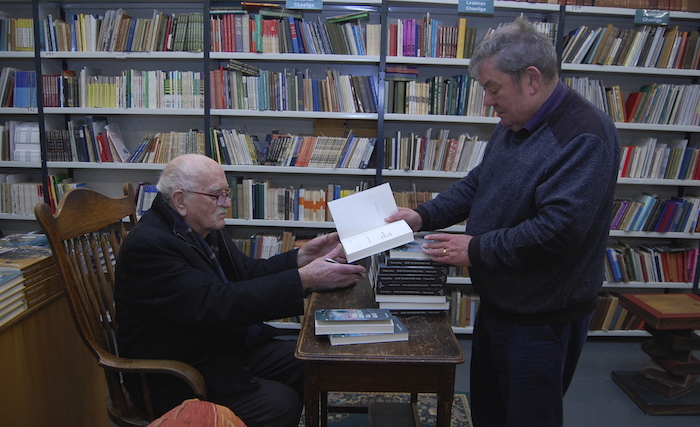 His description of childhood and youth in Callan is a fascinating insight into life in a small Irish town during the late 1930s and early 1940s, and is particularly strong in depicting the power of the Roman Catholic Church, which was at its zenith. Allied to this militant church background, there was also his father’s background as a hit man for the IRA during the War of Independence who at one point was sentenced to death.

It is from this background that Kilroy goes to St Kieran’s Kilkenny’s Diocesan College. Here, his abilities in hurling were a positive attribute and he excelled, playing in the halfback line for the seniors. However, the more important influence in St Kieran’s was a classics teacher, Fr Tommy Brennan, who could be easily distracted from his teaching of Greek grammar by an innocent request “Could you tell us a bit about the Greeks, Father?”

Here was the basis of Kilroy's later trips to Greece and elsewhere throughout Europe. These completed his years at UCD where he finally began to write. As he explores his memories of these years, there is a growing confidence in the narrative that reaches its zenith in the final chapter 'Dublin Theatre in the Fifties and the Sixties'. Here, Kilroy continues the narrative of literary Dublin as already recounted by Anthony Cronin’s As Dead As Doornails and John Ryan’s Remembering How We Stood, and bringing it into the 1970s.

Over the Backyard Wall is a book of highly sensitive and powerful memories, honest and sincere in the telling.