THE PROBLEM some people have with Danny Morrison’s novels is that, throughout them, he commits the heinous crime of knowing what he’s talking about. Had he been a US soldier returned from Vietnam, Iraq, or Afghanistan, it would be perfectly acceptable for him to write about his war.

He would probably be paraded around the top literary festivals and end up taking tea between Colm Tóibín and Anne Enright. Your average literature festival committee is made up mostly of people who love Nelson Mandela and the ANC – because they were always a safe few thousand miles away from Booterstown – but also love the Irish State, and, by strange extension, usually the British state too.

The fact Morrison once acted as a spokesman for those who took up arms against the apartheid Northern Irish state marks him out as someone who must never be allowed meet Ian McEwan CBE, for that would be the end of literature as we know it.

'The British army are portrayed as the oppressive force it was for the overwhelming majority of people in nationalist working class areas. There is no attempt to turn them into the bumbling, but well-meaning, Hugh Grant types'

Morrison was Sinn Féin’s publicity director from 1979 to 1990 and spokesman for Bobby Sands during his hunger strike. Long before he embarked on the more sedate course of writing novels, Morrison had a way with words. It was he who described Sinn Féin’s and the IRA’s dual strategy as “a ballot paper in this hand and an Armalite in the other”. There is no doubt Morrison played a critical role in improving the Republican movement’s PR around that time.

The Wrong Man, first published in 1997, and partly written while its author was detained in the H-blocks, is, absolutely not a propaganda novel; or if it is trying to be it fails in that regard. It is a dark and terrible tale and no one comes out covered in glory. It is a story which could only have been written by a participant, otherwise it simply would not have worked. 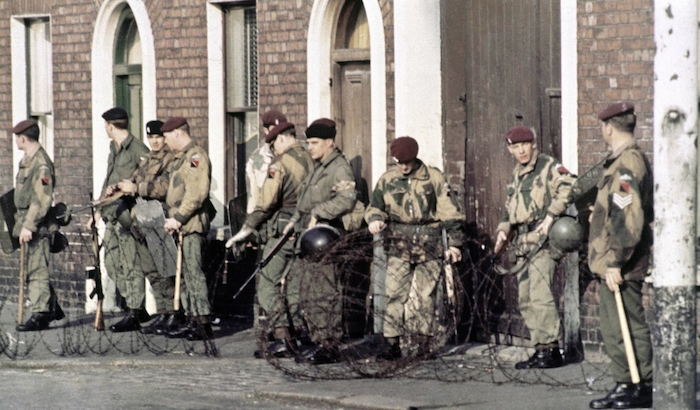 The British army are portrayed as the oppressive force it was for the overwhelming majority of people in nationalist working class areas. There is no attempt to turn the crown forces into the bumbling, but well-meaning, Hugh Grant types beloved of your typical Fine Gael transferring Justin Keating voter. Yet the quagmire in which the IRA found itself by the early 1980s is also clear.

The novel opens with Thomas ‘Tod’ Malone – a relatively recent recruit to the movement’s military wing – being interrogated by a group of not entirely friendly armed men who initially give the impression they might be from the UVF. They are in fact from the special IRA unit charged with rooting out informers. Several IRA operations have gone wrong of late and there is widespread suspicion the movement has been seriously penetrated by British agents. This is a big story told in a lively, honest, way. A must for anyone with an interest in the way literature and politics intersect; The Wrong Man is also an essential buy for anyone who enjoys a damn good thriller.