FOR THE Love Of Chocolate is an attempt at an entire history of chocolate across the 4,000 years since the Mokaya people, in what is now Mexico and Guatemala, began cultivating the cacao tree, the beans of which produce chocolate.

Written by GP Hilson and published by Fior PR, this is a deliciously idiosyncratic book. Hilson notes how, in Mayan culture chocolate was “generally the preserve of the rich.” In the 15th century the Aztecs had taken control of large parts of chocolate producing Mesoamerica. One legend alleges that Quetzalcoatl, Aztec god of “wisdom and wind”, first gave cacao beans to humans and so was expelled by the other gods for giving away their secret. As punishment for being unable to keep his god mouth shut, Quetzalcoatl’s blood was then shed over all the cacao beans in the world “colouring them red for eternity.”

Chocolate has long had an association with subversion and sin, as Hilson notes: “In England in 1675, chocolate houses [in which people would sit around drinking and eating it] were banned by Charles II as being hotbeds of radical politics.” In the febrile place and time that was 17th century England, chocolate didn’t just get people fired up about politics; it was also accused of making them want to do rude things to each other. One of Hogarth’s paintings depicts debauchery brought about by the drinking of chocolate in a London establishment. If said painting is anything to go by, a fine time was had by all. 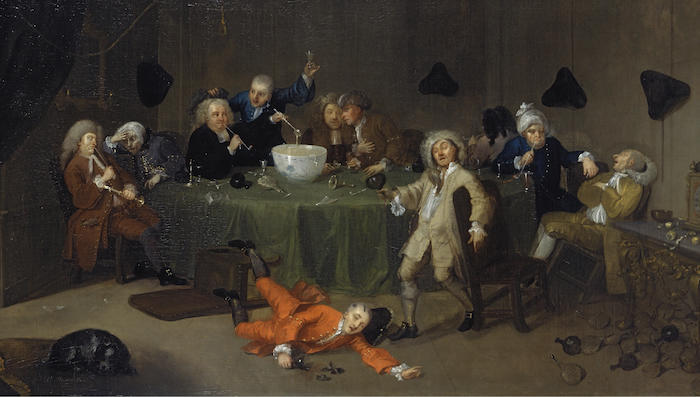 The aphrodisiac effects of chocolate were also appreciated by Giacomo Casanova who “recorded in his autobiographical Histoire De Ma Vie (c1792 ) that he was wont to "drink at least one cup of chocolate a day”, and carried his own “sticks of chocolate with him on his travels”, just in case.

Chocolate has also fallen victim to fake news. In 1671 French aristocrat Madame de Sévigné, credited with being the world’s first gossip columnist, viciously wrote: “The Marquise de Coetlogon took so much chocolate during her pregnancy last year that she produced a baby as black as the Devil. It died.” Hillson does go into detail about the role chocolate played in the development of slavery. Like every other precious thing, there is a vicious side to the way it is extracted and distributed.