It might have been the undercard, but the minor final was entertaining and as brilliant for Galway as the latest crop of minors came up trumps against the odds, with a brilliant fearless display of hurling in Croke Park. It couldn’t have started worse for them with Brian Turnbull finishing the ball to the back of the net inside the opening 15 seconds of the game and the same man slotting over a pointed free two minutes later to leave Galway four points down and under serious pressure.

Galway steadied their ship through points from Donal Mannion and Conor Molloy to cut the gap back to two after six minutes. Ben Moran and Craig Hanafin swapped points as the game got moving, the game could have swung away from Galway on the 15 minute mark when Evan Sheehan stole in along the endline and drove home a brilliant goal to put Cork six points clear and looking good. But Jeffrey Lynskey’s men dug deep when it mattered most and put on a brilliant showing of defiance and heart when it could have all went wrong for them. 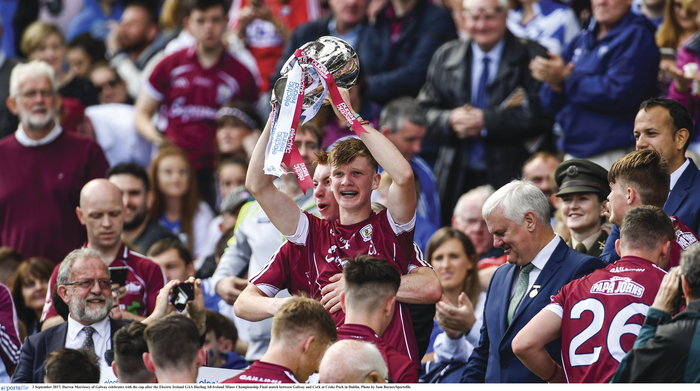 Galway claimed the minor title with a brilliant come from behind win. Photo: Sportsfile

Daniel Loftus drove over a point from well out the park and Molloy added tagged on two more from frees to leave the score 0-5 to 2-3 with 18 minutes gone. The young Rebels though moved six clear by the 20th minute thanks to scores from Daire Connery and Turnbull. Galway kept themselves in the game through another Molloy free and fine score from Sean Bleahane, who fired over under serious pressure from the Cork defence. Galway kept up the pressure and went in just three behind at the break with Bleahene adding two more points and Molloy tagging on his fourth free of the day, with Liam O’Shea and Turnbull getting points for their side to send Cork in leading at the turn around on a score of 2-7 to 0-10.

The second half exploded into life early on, just like the first with Jack Canning hammering the ball to the net after a lung busting run by Mannion inside the opening minute of the final half-hour to level the game up. The sides then went point for point over the next few minutes with Canning’s second goal on 39 minutes putting Galway into a three point lead. The Portumna man reached high to win a long ball in by Conor Walsh close to goal and he showed great strength to hold off his man and fire it high to the net. That strike put Galway into a 2-13 to 2-10 lead and they could feel it in themselves that they were going to see this one home. 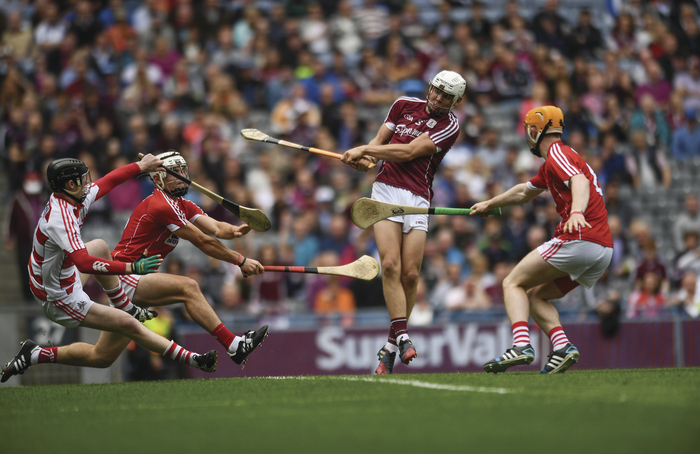 Liam O’Shea cut the gap back to two, before Molloy landed another fine effort from a free for Galway, two more Galway points from Bleahene which needed the aid of Hawkeye and an excellent one from Canning kept Galway in command with 12 minutes to go. Molloy and Turnbull swapped points inside the next four minutes to leave just four between the sides. Cork kept knocking with Robert Downey and Turnbull sticking over points to leave just two between the sides as time ticked down and the danger of a goal crushing Galway’s dreams. But they were able to hold their nerve and see it out in style and claim Galway’s 11th minor title in the final year the grade will be played at u18 level.