The 40th Galway International Arts Festival got off to a flying start on Monday at the Black Box Theatre with the world premiere of Woyzeck In Winter, Conall Morrison’s daring fusion of Büchner and Schubert.

From the moment Rosaleen Linehan enters amid falling snow, with her haunting, eerie, song ‘Hurdy Gurdy Man’, Morrison’s A-list cast deliver in spades. These include Barry McGovern [photographed below with Barry McGovern and Medb Ruane] as the doctor who uses Woyzeck for medical experiments, Peter Coonan as the preening and priapic Drum Major and Rory Nolan as the brash barker.

Leading the way are Patrick O’Kane as the mentally tormented and brutalised Woyzeck, and Camille O’Sullivan as his wife Marie. Morrison skilfully fuses Büchner’s drama with Schubert’s songs – beautifully translated by the late Stephen Clark - achieving his declared aim of "creating a new entity with its own integrity and coherence". As well as the actors, the show also benefits from Jamie Vartan’s visually striking set of a towering pile of pianos and Conor Linehan’s live performance of the music score. 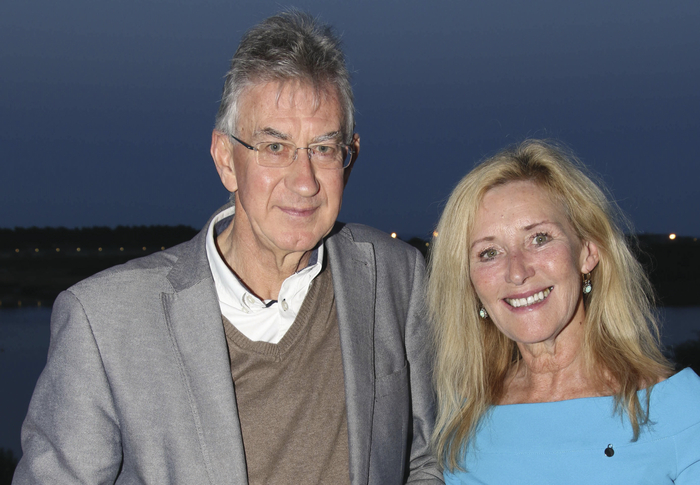 From the wintry world of Woyzeck, we were then translated to the balmy summer setting of the Radisson Blu Hotel for the Festival’s official launch ceremony. GIAF director Paul Fahy saluted the contributions of previous festival directors such as Ollie Jennings, Trish Forde, Ted Turner, and Rose Parkinson, and introduced Mayor Pearce Flannery, who said:

“Galway International Arts Festival is an iconic emblem of all that is good about Galway. We face into being European Capital of Culture of 2020 and that would not have happened without institutions like the festival. It is something every Galwegian looks on with pride, we look forward to the last two weeks of July. I look forward to seeing the tent go up in Fisheries Field, it is an emblem of summertime, of fun, of culture and all that is good in Galway society.”

The listening revellers included members of the Woyzeck In Winter company and other festival participants such as Brazilian artist Ana Maria Pacheco and Tristan and Yseult director Emma Rice.

GIAF CEO John Crumlish, in his speech, thanked the festival’s sponsors and business partners and reserved his special gratitude for the artists; “We really rely on you to make us look good, we rely on you to be at your best and so often you deliver so much more… you give our audiences a holiday in their head.” 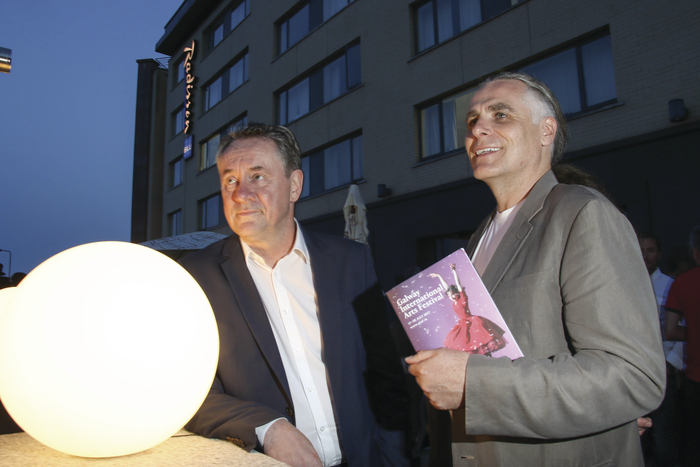 The official opening speech was delivered by artist John Gerrard, who is under commission from GIAF for a major, large-scale new work for Galway 2020. “You have spent 40 years celebrating the arts and girl, you are aging well!” he began. “This festival makes a massive impact on Galway culturally, socially, economically. You bring the city alive each year. It brings an incredible energy to this city as in the brilliant play tonight. You widen the invitation to a very broad audience to engage and embrace the arts who otherwise might not."

"This is and always has been a festival for the public. You use Galway brilliantly as a backdrop, reimagining non-traditional spaces and transform them into cultural powerhouses," he continued. "This festival’s reputation has soared internationally in recent years, touring work to London, Edinburgh, New York, Chicago, Washington and Sydney and this shines an international spotlight on the work of Irish artists and the festival itself. You support artists by helping them realise major projects. That backing and support is invaluable. On the subject of borders, art has no borders but it does have edges and in 2020 Galway will lead from the edge of Europe and I suspect you guys are going to redefine ‘edgy’, mark my words. I’m looking forward to the capital of culture here and I’ll finish by proposing a birthday toast to the festival.”

As the applause for the speech died down guest band The Galway Street Club launched into a joyously raucous set which kept the good vibes going late into the night.