INTERNET DATING, family strife, and a life in politics are the subjects of three shows staged by local companies, which are all being staged as part of the 2017 Galway Fringe Festival.

Match, written and directed by Hazel Doolan, and staged by Eva’s Echo Theatre Company runs the Galway Mechanics Intitute from Wednesday July 26 to Sunday 30 at 9pm. It takes a keen-eyed comic look at the world of modern dating and the cast includes Elizabeth Flaherty, Cathal Ryan, Rena Bryson, Cillian Glynn, and Doolan herself.

“It’s about this girl called Ann who’s a regular 28-year-old working woman who is looking for a relationship,” Doolan tells me. “Her friend Charlotte is the opposite; Anne is old school whereas Charlotte is very modern day, she finds dates online and has once-off hook-ups on Tinder.

"Charlotte sets up a Tinder profile for Ann and from that Anne gets a match with this guy and goes on a date with him and the story goes on from there. There is also a love interest with a work colleague, George, who’s mad about Ann but is scared of asking her out. It’s a romantic comedy drama. It explores how our attitude to dating has changed and how it has progressed from years ago to now. It’s so easy now to get a match and date on Tinder whereas years ago it was a bit more meaningful; people met at dances or clubs.” 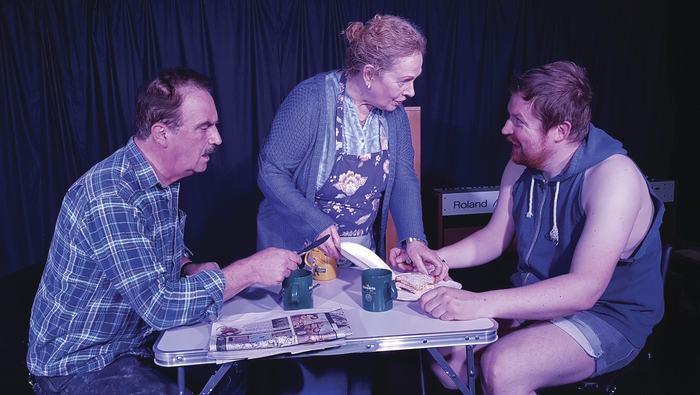 What Do You Mean She Doesn’t Like Chicken Goujons?, a knockabout comedy revolving around the clash between a domineering mother and her son’s new girlfriend, is the debut offering from JP Murphy and the East Galway Theatre Company.

“It’s largely based around the mother, Caithriona,” Murphy explains. “She runs the household like a dictator where everything is going smoothly until her son Brendan goes off to college. He finds new influences there and announces that he has met a girl and is bringing her home for dinner and this turns Caithriona’s world upside down.

"Gina, the girlfriend, is a new age hippie type. She is a vegan which does not go down well with Caithriona. Jimmy, her husband, has been beaten down over the years and does whatever Caithriona tells him. In his younger days he was a bit of a playboy and he suddenly sparks into life when he meets Gina. So both the men in the house have taken a shine to Gina which causes all sorts of bother.”

Murphy plays the role of Brendan: “Brendan is like an overgrown child and often drives Caithriona crazy. He starts behaving differently, wearing aftershave and getting trendy jeans, and starts answering mammy back. Someone seems to have been putting notions into his head. He’s learning more about life than mammy likes. The show is mainly about the clash between Caithriona and Gina and it builds to a showdown between them.”

Goujons is directed by Daniel Cronin and also features Tony Callanan, Ilona Gilbert Daly, and Mairead Farrell. It runs in Kirwans Lane Theatre @ Busker Browne’s on July 24, 26, and 27 at 8pm.

Just Guff, by Hot Potato Productions, distils a lifetime of political experience from author Jim Ward, a longtime Fianna Fáil stalwart. “I was on the National Youth Committee of Fianna Fail in the 80s,” Ward tells me. “I was chair of Ógra Fianna Fail in Galway West, and chair of the biggest cumann in the country, in Salthill, for years. I worked my way up through the ranks then worked my way down again,” he adds with a laugh.

“Although the name of the party isn’t mentioned, the play is about Fianna Fáil from the 1960s up to the crash, it covers things like the Arms Crisis, Taca – the organisation of big businessmen supporting the party, the famous Ard-Fheis where Patrick Hillery marched Kevin Boland out of the hall. It also looks at affairs at the local level and has humorous anecdotes. The central character is an ageing, disillusioned party hack.”

Director Jenny Bassett offers her take on the play; “I worked with Jim to develop the script and what we’ve brought a great deal of focus to it and included those times when women have been brought into political parties. It is a great script to be working with; we fore-grounded one man’s personal journey in a political party.

"That man is symbolic of a lot of people who were in the grassroots and were let down. He trusted and believed in the party and that it would make his and his children’s lives better, so the way that the personal is also the political is highlighted in the script. During the space of an hour we see a man whose life was full of certainty having that certainty turned upside down through a series of revelations that change his life. It’s a comedy, Jim has a wonderful turn of expression and there are lots of great one-liners and lots of anecdotes local national and historical, many of which have not been published before.”

Just Guff features Michael Irwin Frances Jones and Blathnaid O’Dea and runs at The Cellar Bar from July 21 to 23 at 6pm, and from July 26 to 28 at 8pm. See www.galwayfringe.ie