While the last electoral constituency review of County Galway saw it divided into three - like Gaul in Caesar's time - the latest review is more tinkering at the edges - but even these modest changes will worry at least one of our most prominent TDs.

In 2014, the time of the last boundary revision, population changes and a reduction in the number of seats at Leinster House saw a chunk of south Mayo added to Galway West, while the eastern flank of Galway East was merged with Roscommon in the new Roscommon/Galway constituency. The Constituency Commission Report 2017 is proposing further changes, which, while less dramatic, have consequences for voters and politicians.

Galway West: The constituency remains a five-seater, but with a reduced electorate, as 9,440 of its 154,354 residents will find themselves in different constituencies at the next General Election. Of that 9,440, c4,500 at the eastern fringe of the Oranmore/Athenry ward, around Coldwell, Turloughmore, and Lisheenkyle, will go to Galway East; while c4,900 around Ballinrobe and Garrymore go back to Mayo.

Despite Shrule, Cong, the Neale, and Kilmaine remaining in Galway West, the number of Mayo votes here has been approximately halved and probably ends the (admittedly slim ) prospect of any seat being won at that end. However in 2016, South Mayo did provide a solid chunk of votes for Fianna Fáil's Éamon Ó Cuív, while Fine Gael received a substanial vote, breaking down almost evenly between John O'Mahony and Seán Kyne.

However, on closer examination, once children and other ineligible voters are excluded, plus factoring for turnout, a population of 4,500 probably equates to only 2,500 or fewer votes.

Given Dep Ó Cuív has the safest seat in the State and will be re-elected regardless of south Mayo, he will not be worried by this reduction. Dep Kyne is on his second term as a TD. This, his position as a junior minister, and ability to hold a Connemara seat alongside the formidable Dep Ó Cuív augrs well for him next time out - even if the now Senator John O'Mahony decides to plump for Galway West again.

Independent TD Catherine Connolly and Sinn Féin's Trevor Ó Clochartaigh will not be concerned as south Mayo put little their way last time, their main vote coming from Connemara and the city.

The two TDs who will be most concerned are FG's Hildegarde Naughton and Independent Noel Grealish. A reduction in south Mayo and the amputation of parts of the Oranmore/Athenry ward, will see a reduction in the FG vote, as both areas are largely good for the party. Dep Naughton knows it her her seat that is the most vulnerable of the two FG seats in Galway West. She will now be hoping FG does not insist on running a third candidate at the next election so she can have the eastern part of the city and Galway West to herself so as to take every available vote needed.

Dep Grealish will also be concerned for the same reasons - part of his stomping ground is now lost to another constituency. On initial examination of the figures, he would appear to have lost c700-800 votes. While unwelcome for the Carnmore man it is not fatal, as FF will lose votes from the Mayo end as well, meaning Dep Grealish only needs to stay ahead of the second FF candidate to be in with a fighting chance of a seat - not impossible given how Dep Ó Cuív's dominance tends to render his FF colleagues into also-rans.

Galway East: Dep Grealish's difficulty is Dep Ciaron Cannon's opportunity - with that part of the Oranmore/Athenry ward and all its Fine Gael and ex-PD voters coming into Galway East, his seat looks much safer.

Galway East is most affected by the changes with Dunmore, Clonberne, Moylough, Mountbellew, Ballymacward, Kilconnell, New Inn, and Aughrim being transferred out of the constituency and into three-seater Roscommon-Galway (although this constituency loses a tranche to Sligo/Leitrim, possibly making it better for Galway based candidates ).

Independent Alliance TD Seán Canney will be concerned by the loss of so much territory from the east of the constituency, as well as losses from the Tuam hinterland - part of his natural base. However it could focus and concentrate his support, meaning he could be much safer next time. It may also scupper any plans for a comeback by north Galway political clans such as Donnellans and Killeleas, which will suit Dep Canney fine. 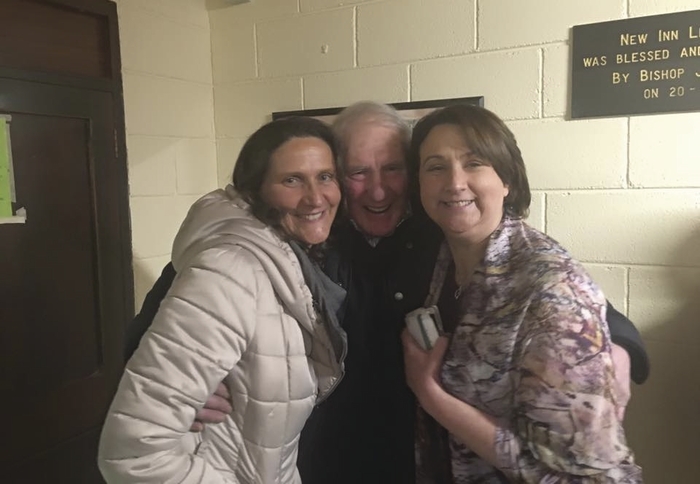 Fianna Fáil's Dep Anne Rabbitte [pictured above with supporters at the 2016 General Election] in the far south of the constituency is possibly the least affected, but again, will take note of the loss of areas in Galway East and be hoping it will also focus and concentrate her support.

Roscommon/Galway: The newly added areas from Galway East may favour Minister Denis Naughten and Galway county councillor Tim Broderick although the latter presumably will not run as there are already two Independent TDs in the constituency. A considerable area in the Boyle hinterland is going to Sligo/Leitrim. This may impact on FG senator Maura Hopkins who missed out narrowly in Roscommon/Galway last year. Frank Feighan, a TD in the old Roscommon/South Leitrim constituency, but who stepped down last year, has announced he will run in the new Sligo/Leitrim.