ONE OF the most keenly anticipated shows of the 2017 Galway Theatre Festival was Emma O’Grady’s What Good Is Looking Well When You’re Rotten On The Inside? at An Taibhdhearc and it fully lived up to expectations.

Based on a series of tape recordings made by O’Grady’s grandfather shortly before his death this was a multi-layered theatrical mosaic which wove together story, song - and a dash of slapstick - as well as Gay Byrne, fairy changelings, Vera Lynn, Dominic Behan and assorted family dramas. There was a wonderful story of a bullying priest getting his comeuppance. The fairy hill of Knockma, close to the O’Grady homestead, was a looming physical and imaginative presence.

Another memorable story recounted how Paddy’s mother and her mother-in-law lived under the same roof for years without speaking a word to each other. On the night before the elder O’Grady lady died she summoned her daughter-in-law to her bedside and the two women finally talked together for hours. The story parallels what O’Grady achieves with this show; as a young girl she and her grandfather were not especially close but with What Good Is Looking Well... she created a deep, warm, and rewarding conversation with this departed and fascinating man. A veteran of World War II and later civil servant, O’Grady was also a thwarted writer and through this show, clearly a labour of love, O’Grady finally let his voice be heard.

The show was much more technically elaborate than most solo performances. The furnishings conjured a cosy sitting room above which were an array of suspended speakers. Paddy O’Grady’s voice was part of the play’s soundscape as snatches of his recordings were heard. There were myriad sound-cues throughout the show and Rob Moloney’s sound design deserves a round of applause.

Attired in a pinstripe suit, O’Grady both inhabited Paddy’s persona and commented upon it, shaping and enacting the story as the play progressed in a compelling, bravura, performance. Four directors were credited; Jonathan Gunning, Catherine Ireton, Caroline Lynch, and Andy Smith. Kudos to them also and a special mention to Sadhbh Barrett Coakley for her stage management and acting cameo. 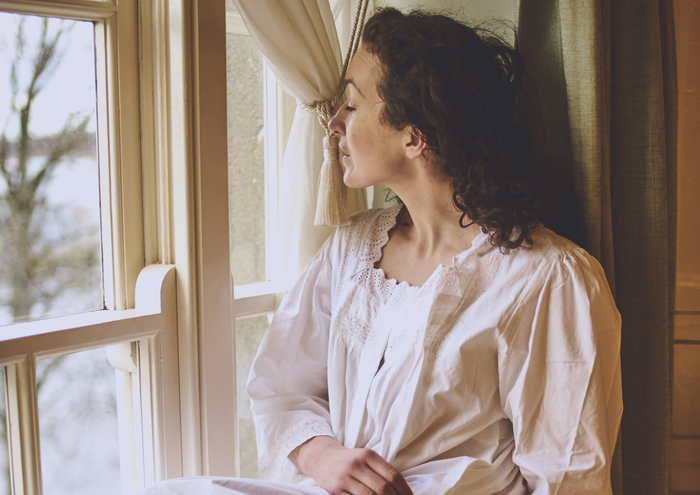 At Nuns Island Theatre, Tara Breathnach [pictured above as Molly Bloom] delivered an absorbing staging of Molly Bloom’s soliloquy from Ulysses under the assured direction of Petal Pilley. Breathach had spoken of wanting "to portray a real woman on stage" and in Molly she entirely succeeded. The play unfolded in the Blooms’ bedroom where the sleepless, restive Molly mused on life, marriage, sex, parenthood, and age, her thoughts delivered with unabashed and often humorous frankness. The frankness extended from describing her affair with Blazes Boylan to bodily intimacies like menstruation and farting. This was very much Molly Bloom ‘in the round’ - vivid, palpable, irresistible.

The same venue hosted Candlelit Tales’ Shadows Of The Táin, Aron and Sorcha Hegarty’s richly imaginative rendering of Táin Bo Cuailgne. They shared narrative duties as they described Queen Maeve’s quest for the Brown Bull of Cuailgne and Cú Chulainn’s heroic one-man resistance of her army. The narrative combined drama and wry humour in its description of the tale’s many colourful characters and incidents. Further enriching the production was the wonderful live music and shadow puppetry. This was a show to captivate young and old alike.

At Cava restaurant, writer/performer Leonor Bethencourt [pictured below] assumed the comic persona of air hostess Zocorro in the entertaining Marilyn Monroe Airlines: Always Late and Unreliable! Sole crew member of an accident-prone budget airline, Zocorro greeted her audience/passengers attired in platinum blonde wig, Zorro-style mask and flamenco dress. She regaled us all with tales of her childhood and her airline’s sundry mishaps, with occasional allusions to the life and times of Marilyn Monroe. It was a delightfully diverting confection with lots of laughs – and the tapas served as part of the admission price were also very tasty. 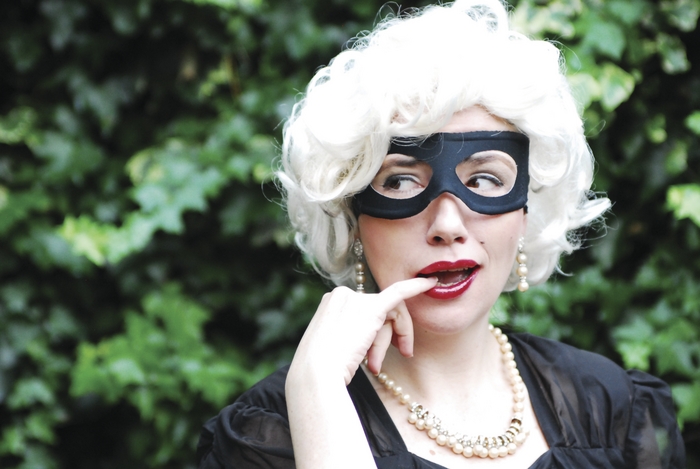 Dubliner Fionn Foley brought his one-man musical, Eamonn (From Menswear ), to Druid’s Mick Lally Theatre. Briskly-paced, stylish and witty, with a fine grasp of rhythm and rhyme, Fionn’s Eamonn expounded the gospel of retail. He also revealed prejudices against Travellers and foreigners, in songs like ‘I’m Not Racist, I’m Just Having the Craic’. Toward the end of the show Eamonn had a Scrooge-like epiphany and changed his views but Foley had afforded more stage time to his character’s prejudicial phase than his enlightenment, which was a regrettable imbalance.