A DESDERVED standing ovation greeted the conclusion of Helen and I, Meadhbh McHugh’s debut play for Druid at the Mick Lally Theatre, which surely announces the arrival of a fine new Irish writer.

Helen (Cathy Belton ) and Lynn (Rebecca O’Mara ) are two middle-aged sisters re-uniting in the family home as their father is dying. The play opens as neurotic Lynne is rehearsing how she will tell elder sister Helen that she has left her steady position at the post office for a job as an embalmer. Heavily bedecked in make-up, Lynn seems chiefly attracted to the embalming job for the opportunities it will afford her of beautifying the dead; "He’s got a good face, there’s lots of potential there for me to do something really special," she declares, speaking of her father.

Yet Lynn, as Helen acidly remarks later, looks "like a little living corpse". As for Helen, she is feeling the physical and emotional pangs of middle age, her body is "used up" she complains at one point and one senses she is haunted by disappointment and regret. The sisters’ exchanges frequently bristle with long remembered resentments and there are echoes of Eugene O’Neill in the way McHugh has these siblings pick at the scabs of old psychic wounds.

Further stirring the bubbling family pot and adding in their own pinches of salt and pepper are Lynn’s jocular husband Tony (Paul Hickey ) and Helen’s teenage daughter Evvy (Seána O’Hanlon ). Is Tony responsible for the bruise on Lynne’s eye? The possibility is left hanging but one could imagine him doing it. 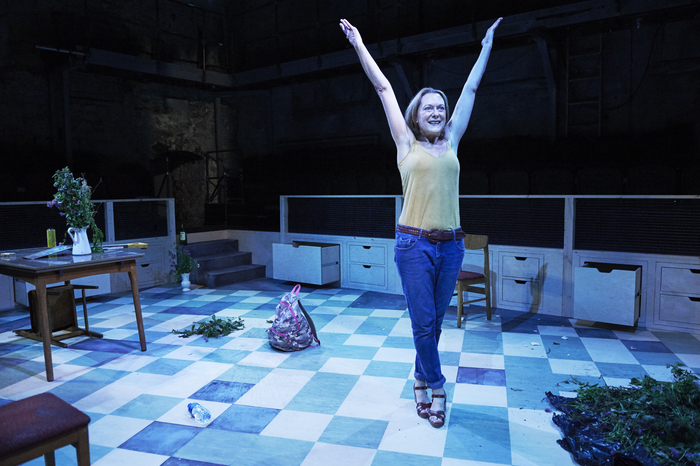 In fact all through the play McHugh displays great skill in the way that unspoken thoughts and feelings make the pressure of their presence felt; along with her words, her silences are part of the material with which McHugh sculpts her drama.

The play takes place in the round - or in the rectangle to be exact. Designer Aedin Cosgrove arranging the audience on raised seating around four sides as we gaze down into the arena of a chequer-tiled kitchen floor while Philip Stewart’s music underscores the edgy to and fro of the action

Director Annabelle Comyn gets wonderful performances from all four members of her cast as they wring every inch of tension, suspense, emotion, and also humour out of McHugh’s script. At one point Cathy Belton launches into an impromptu Irish jig on the kitchen floor which is like a strange yet potent inversion of the famous dance sequence from Friel’s Dancing at Lughnasa. That dance was also set in a house of sisters but was a spontaneous outpouring of joy and togetherness - here it is an expression of pain and strife, yet no less eloquent or powerful for that.

Belton and O’Mara are terrific throughout as they put their characters through the play’s many hoops and ultimately, for all the hurt, Lynn and Helen remain sisters and bound together as they acknowledge toward the end. They both even admit that Tony is good “now and then” as the play concludes on a note of acceptance.