A fire which gutted one of the city centres oldest businesses has been described as a "tragedy" for the area. Gardai are investigating the circumstances surrounding the fire but the cause is not yet known.

A major blaze at Shannon Dry Cleaners in Prospect Hill erupted shortly after midnight on Wednesday morning. Large crowds gathered in the area as four fire crews battled the blaze throughout the night. The fire completely engulfed and gutted the single storey mainly glass fronted building.

The premises were vacant when the fire erupted and nobody was injured during the incident. However, the road at the front of the building remained closed until Wednesday morning while gardai and a Galway City Council engineer assessed the site's safety, causing serious traffic delays in the city.

Gardai have carried out a forensic investigation which should help to pinpoint the cause of the fire. The forensic samples will also determine the course of the Garda investigation into the incident. However a spokesperson for Mill Street Garda Station said there was nothing to indicate the fire was started maliciously.

Shannon Dry Cleaners is highly respected in the dry cleaning industry since being established in Athlone in 1960 by George and Mary Kenny. The Prospect Hill outlet opened shortly after, and is now managed by Georgina Kenny. 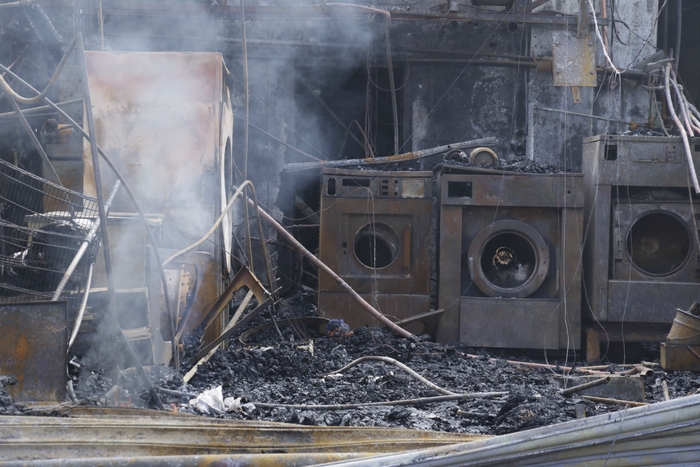 Councillor Michael Crowe, who is a native of Bohermore, was in the area at the time of the blaze, and paid tribute to Galway Fire Brigade.

"It was what I would describe as a vicious fire, it took off quickly and spread agressively - it was a scary sight. The fire service must be commended for keeping it within the building," he said. "Cars outside were damaged and there was a small amount of damage to the post office next door, but I think it could have been even worse than that only for the quick reaction of the fire services. They worked steadily from midnight until close to dawn."

Councillor Crowe sympathised with the owners and staff. "The loss of the business is a huge blow to the area. Whatever happens now - regardless of whether the business will re-open - this site is going to be derelict for the immediate future. As far as I know there are about 15 people employed here. The manager has been there since 1960. It is a really busy outlet, which added value to the area. I never remember the street without Shannon Dry Cleaners. I hope that in time it will re-open, but that is not a question for today."