IT IS always something of a special occasion when Druid unveils a new writer, and all the more so when that writer comes from the west of Ireland. So there is much excitement about Helen and I, the debut play by Tuam's Meadhbh McHugh, which receives its world premiere at the Mick Lally Theatre on Tuesday September 13.

Set on the outskirts of an unspecified Irish small town, the play centres on two 50 something sisters, Lynn and Helen, who reunite at their family home as their father is dying. The sisters are like two wasps seething in a jam jar, with old resentments and insecurities ever on the brink of erupting. Completing the cast and compounding the fraught family atmosphere are Lynn’s jocular husband, Tony, and Helen’s moody teenage daughter, Evvy.

McHugh’s play brings a darkly funny and sharply intelligent eye to her characters’ jagged rivalries and frailties, marking Helen and I as a truly accomplished debut. The 27-year-old author is a graduate of Trinity College, Dublin and the Lir Academy, where she did a masters in playwriting. In 2014, her debut radio play, April Showers, was broadcast by RTÉ and won a PJ O’Connor award.

She is currently studying and working at Columbia University, New York. “It’s great,” she says of the Big Apple. “New York is very full on. I’ve been seeing lots of theatre there which is a great apprenticeship in itself. That said, it’s nice to be back here now and I’m very excited that Druid are doing the play.” 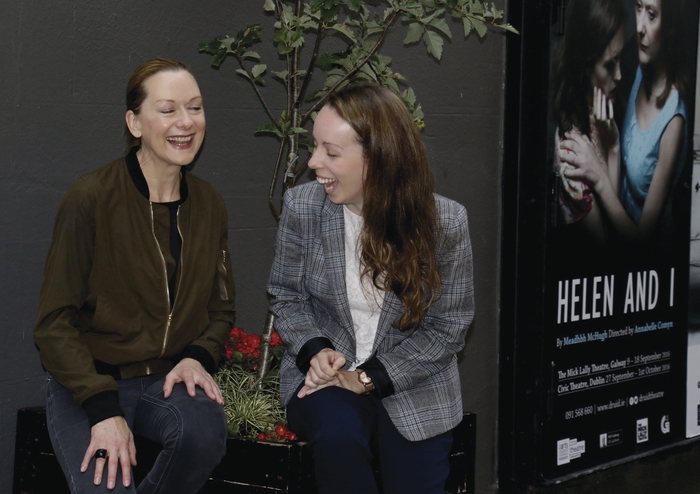 McHugh was a keen theatregoer in her Tuam days and regularly caught productions from Druid. “I remember seeing The Walworth Farce by Enda Walsh in the Town Hall,” she tells me. “That was a very memorable experience, I remember coming out crying. I saw plenty of them through the years. Growing up we went to a lot of plays though as a kid I didn’t make much distinction between professional and amateur theatre, it was just all live performance.”

I comment on the fact that Helen and I’s main characters are nearly twice as old as their author. “It’s interesting that they are older characters but Evvy is there too who is younger,” Meadhbh replies. “The play is about change and the characters are all at points of their life where they want change and they are not quite sure how to go about it. I was looking at women at different stages of their lives, so you have Evvy in her teens then Helen is at a midlife point.”

One of the play’s great strengths is in how McHugh maintains a crackling nervous tension throughout between what is spoken and unspoken; “There is a lot happening underneath the lines,” she agrees. “One of the images I have about the play is a knot, they are all embroiled with each other in so many different ways, and you see that as the play progresses. There are alternative possibilities; we see this storyline of what could have been with other people.”

Helen and I had an early public outing last year in a Druid Debut presentation at Galway International Arts Festival. “It was great, that was so important,” McHugh says of that ‘test run’. “The play is in your head but you do need to hear how actors will read and interpret it and also how an audience responds to it. What I took from it was that the play’s humour was evident, that is something you’re never sure about beforehand. There was also a question and answer series afterwards so it was great to get that audience feedback, people brought up interesting questions.” 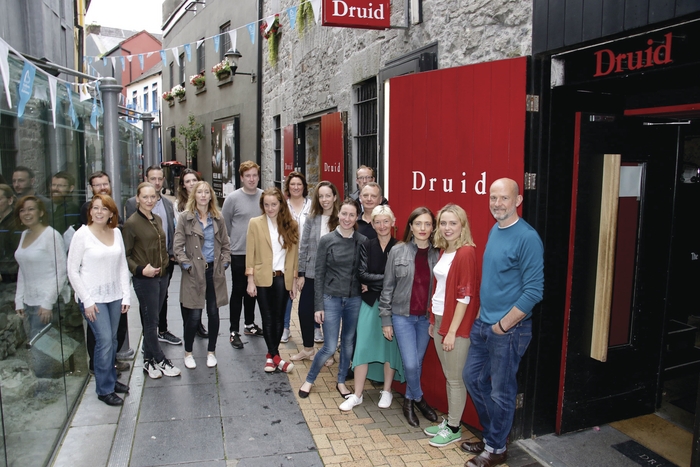 This world premiere production of Helen and I is directed by Annabelle Comyn and features Cathy Belton, Rebecca O’Mara, Paul Hickey, and Seána O’Hanlon. Set design is by Aedin Cosgrove and sound by Philip Stewart. McHugh is delighted with their input to her play.

"All the people who are working on it are fantastic,” she enthuses. “I love seeing the set design and the model box and how the play is going to work as a live 3-D experience. We’re going to do it in the round; the seats will be raised up and looking down on the action. It’s great to see people coming up with ideas from your words.

"I hadn’t envisaged the play being done in the round; that idea came from Aedin Cosgrove. She and Annabelle have picked up on the idea that the story is claustrophobic and it has that sense of people unravelling as they get out of a tight knit situation. Then there is Philip the sound designer and it’s been so exciting hearing his ideas where he is picking things up from different images in the text. So there will be many layers on top of my play.”

Helen and I runs from Tuesday September 13 to Sunday 18, with previews from Friday September 9. Booking is from www.druid.ie