RISING STAR and Irish soul singer Brian Deady brought down the curtain on this year’s Galway International Arts Festival in fine style with a rousing gig at the Róisín Dubh on Sunday night.

His Skibereen-meets-Stax brand of soul had the audience whooping in appreciation as he worked through the highlights from his two albums, Interview and Non-Fiction. ‘Over Like McGyver’, ‘A Darkness’, ‘Betty’, and ‘Call My Name’, and showed the authenticity of Deady’s soul chops.

His is music that can hit your dancing feet, your gut and your heart, often at the same time, and alongside the uplift of a song like hit single ‘Clap Both My Hands’ he can deliver the naked vulnerability and heartbreak of a song like ‘Dad’, one of the standouts of the evening. Heck, we even got some ‘werewolf soul’ as Deady donned a lupine Halloween mask for one track and still managed to sound great in it!

Looking back over the two weeks, my personal highlight was Druid’s Waiting for Godot. Garry Hynes yet again turned up trumps with her flawless casting and got impeccable performances from Marty Rea and Aaron Monaghan as Gogo and Didi, Rory Nolan as the tyrannical Pozzo, and Garret Lombard as Lucky. The production has just gone to Inis Meain, where it played outdoors in a setting of real Beckettian starkness. Oh, to have been able to see it there. Seeing it in the Mick Lally Theatre was a great treat in itself, though.

Invitiation to a Journey, inspired by the life and work of Eileen Gray, was a collaboration between CoisCeim Dance, Fishamble Theatre Company, Crash Ensemble, and GIAF, and this team of chefs made a very tasty broth indeed - a wonderful fusion of dance, writing, acting, music, and design that illuminated Gray’s eventful life and creative drive.

Circus/physical theatre ensemble Gravity & Other Myths provided a hugely enjoyable hour-long display of acrobatic and gymnastic ebullience and élan in A Simple Space. The show was largely played on ‘the simple space’ of their stage area and also kept things simple with props. The septet of performers - five guys and two gals, smiling amiably and looking like they’d just trotted up from Bondi Beach – went through their gravity-defying routines of leaps, swirls, flips, throws, handstands, headstands, and sundry combinations with terrific skill, and a nice leavening of humour as well. 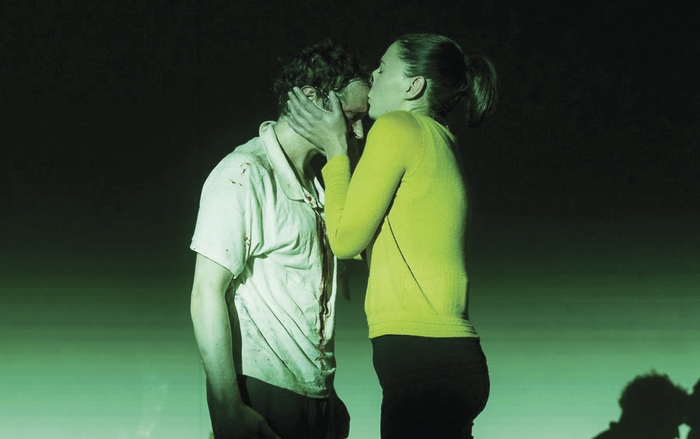 Enda Walsh’s Arlington [A Love Story] was a more mixed affair. It had its admirers and got some rave reviews, for this reviewer it did not ‘connect’ to the same degree as previous plays like Ballyturk or The Walworth Farce.

Bleaker than those earlier works, Arlington was full of theatrical bravura, with great performances from Charlie Murphy and Hugh O’Connor [pictured above], plus a fierce dance passage from Oona Doherty. At times, however, it was hard to figure out just what was going on and the characters did not fully engage, or their humanity entirely emerge, amid the surrounding sound and fury of the production.

Song From Far Away, from Toneelgroep Amsterdam, written by Simon Stephens and directed by Ivo Van Howe, gave us Eelco Smits as a bereaved US-based financier compelled to return to Holland for his brother’s funeral. Here he must engage again with his semi-estranged family and endure a painful meeting with his ex-boyfriend.

The play is a monologue, the fiction being that Smits character is composing letters to his dead sibling, describing his thoughts and actions and encounters. While Stephens’ writing can be poignant and perceptive, the trouble is this still ends up more in the realm of reportage than drama, and it tends to feel more like something one would rather read than watch. The eponymous song was written by Mark Eitzel and the moment where Smits sings it in tandem with Eitzel’s recorded voice was memorable.

Death at Intervals, adapted and directed by Kellie Hughes, also brooded on mortality as Olwen Fouere – death in a red dress no less - enacted a pas de deux with Raymond Scannell’s musician. Adapted from Jose Saramago’s novel, it teasingly played out the mutual attraction between Death and her human prey/admirer both of whom are alternatively tentative and desirous. The dialogue, however, was often strangely flat, and the proceedings all a bit too sombre.

A lust for life was in full view in Our Ladies of Perpetual Succour from the National Theatre of Scotland gave us a gang of randy teenage choirgirls on the skite in Edinburgh, swilling drink and looking to get laid. Adapted by Lee Hall from Alan Warner’s novel, and directed by Vicky Featherstone, the play deftly moved beyond the raucous high-jinks of its first half to movingly show the girls’ personal vulnerabilities. It also had terrific harmony singing throughout – who would ever have imagined ELO could sound this good? Like Brian Deady’s song goes, ‘Clap Both My Hands’.