And Keaveney and Walsh,

Now and in time to be,

Wherever green is worn,

A terrible beauty is born.

In this year of commemoration, it is fitting to remember our fallen patriots whose seats in the Dáil and Seanad were sacrificed in the electoral bloodshed of the 2016 Rising.

Oh, how much poorer we are in Galway, gazing through tears at a changed political landscape, mourning the loss of nine martyrs, whose service to the State will live long in the minds of men from Cleggan to Killimor. Three senators and six TDs made their last stand in the GPO that day, as the electorate bombarded the building relentlessly with artillery from its gunboat on the Liffey.

John O’Mahony, who had been stationed in the relatively tranquil Boland’s Mill but received orders to redeploy, returned fire from an upstairs window as chaos reigned inside. Young Paul Connaughton carried armfuls of ammunition hurriedly to O’Mahony, shuffling loosely and stumbling in a pair of his father’s boots.

“Let’s Keep the Recovery Going!” O’Mahony shouted to his comrades. This drew heavy fire from the electorate down below. Sensing that the battle had turned and the rebels’ cause was now doomed to failure, Colm Keaveney changed into an enemy soldier’s uniform and began shooting at his colleagues. Brian Walsh also had a gut feeling that the day was lost and decided to escape rather than face the electorate. He knew of a secret tunnel leading out of the GPO because he’d worked for the developer who built the place.

Fidelma Healy-Eames, who had been on the losing side in several battles, refused to accept her fate and emerged defiant on the front steps of the building armed with two pistols. In a remarkable action of self-sacrifice, she opened fire and ran forwards, throwing herself at the electorate, screaming: “It’s my seat! It’s my seat!”

Michael Mullins was also there.

Nine patriots laid down their seats on that day in 2016, having left an indelible mark on parliamentary democracy and our nation state. They will never be forgotten, but for what will they be remembered most?

In the case of former senator Healy-Eames, perhaps it is tales of her admirable persistence that will be recounted at firesides by one generation to another in the years to come. Her most recent unsuccessful tilt at the Dáil was her fourth, suggesting that her understanding of this repeated rejection was that voters – like an Irish visitor who says ‘No’ three times before accepting a cup of tea – were just being polite by refusing to elect her.

Regardless, her decision to retire from politics will drain colour from the Seanad, like soapy water from an enormous jacuzzi. Her experiences with car tax, train tickets, 'wiffy' codes, and frape will forever remain the stuff of legend.

Her erstwhile colleague, Brian Walsh, will be missed no less. Finely tuned to vagaries in the political environment, he spent most of his parliamentary career floating about like a plastic bag in the swirling winds of public opinion. Having stepped in and out of the 2007 general election, like the father of the bride doing the Siege of Ennis, Walsh flip-flopped again on the X-case legislation, and his position on the City Bypass was so malleable that they had to put a roundabout in the middle of the road to accommodate his U-turns.

In the east of the county, former Labour, then Independent, then Labour again, then Independent again, then Fianna Fáil politician Colm Keaveney was involved in more parties during the past five years than Justin Bieber. He was one of the first to commandeer a lifeboat and cast off from Labour’s sinking ship in 2012, waving two fingers at his former colleagues before setting a course for the tranquil waters of the opposition benches.

He subsequently joined Fianna Fáil, whose strong electoral record in Galway East represented a political lifeline for the Tuam-based TD. Like a cuckoo hatched in a robin’s nest, however, Keaveney never seemed to the Fianna Fáil faithful like one of their own and they shunned him in preference for Anne Rabbitte last February. 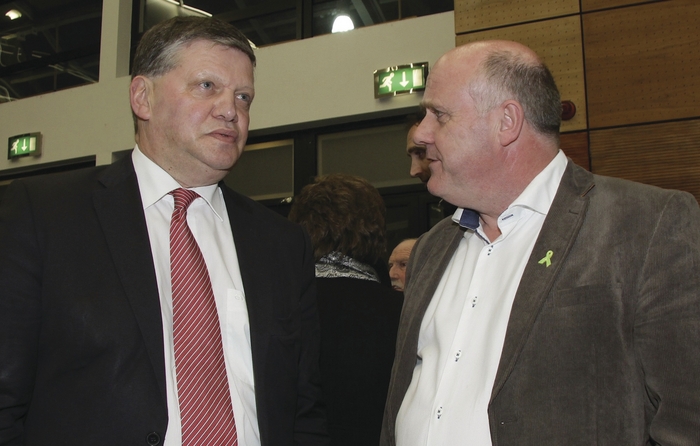 Labour’s Derek Nolan was another to fall on his sword. Among the most capable of Galway’s delegation to the Dáil, he learned that small men can cast a long shadow; and never quite measured up to his popular predecessor, Michael D Higgins. Of course, Nolan wasn’t helped by the fact that his party had been fed an orange ball-gag and frocked in a PVC suit by its dominatrix partners in Fine Gael for the duration of the 31st Dáil. Labour had offered its rump for a paddling and, in exchange, accepted a handful of ministries to the chagrin of voters who had been wooed by policies so quickly set aside.

Similarly, Lorraine Higgins was hopelessly tied to the party’s millstone and – despite ample ability and panache – and was never going to be elected in a constituency like Galway East.

Fianna Fail's Michael Kitt, who would probably have been elected had he stood, decided in advance of the election not to contest; preferring to grab a bowl of popcorn, pull up a stool, and watch Keaveney and Rabbitte tear lumps out of each other.

His was one of two political dynasties that came to an end in Galway East. Paul Connaughton snr was an Oireachtas member since 1977 and handed over the reins to his son in 2011. Young Paul’s electoral defeat must have been particularly galling; like borrowing your dad’s Porsche for the debs and crashing it on the way home.

John O’Mahony enjoyed sporting success with Galway but his luck did not extend to the ballot box. His switch from Mayo to Galway West was cleverly spun as a sacrifice for the Fine Gael team but, in reality, represented his own best chance of getting back to the Dáil. In the end, geography made him less transfer friendly than his Galway colleague, Hildegarde Naughton, to whom he ultimately lost out.

Michael Mullins was also there.