A joy to listen to from first to last, the album sees McPartlan combine not only with trad stalwarts like MairtÍn O’Connor, Seamus O’Dowd, and Cathal Hayden, but also with revered New York jazz pianist Bertha Hope and her African-American sidekicks, bassist Kim Clarke and percussionist Shirazette Tinnin. The outcome of this heady mix of disparate influences is a deliciously distinctive and marvellously achieved musical melding that thrillingly refashions standards such as ‘Hangman’, ‘The Cuckoo’, ‘Shady Grove’ and ‘Lord Randall’. The Irish Times has already hailed the album as "immensely imaginative" and a "multi-layered gem".

The research and early development of this project came about through Mary’s Fulbright Scholarship in 2013. She spent time at Berea College in Kentucky and had two very special opportunities to meet Jean Ritchie in person. Mary also spent time in New York where she first met and collaborated with Bertha Hope, one of the greatest female pianists in the history of American jazz, who can still be heard playing at the famous Minton’s Jazz Club in Harlem.

“As a traditional singer one is always on a quest discovery,” Mary tells me as she chats about the album. “I would have known about Jean Ritchie for half my life. I came upon a book of her songs and I just completely connected to her story and her roots and her lyrics, I recognised most of the songs but she reworked them in her way and I liked them. In 1952 she got a Fulbright Scholarship to come to Ireland and Britain to research her own folk music and its history. She made many journeys after that to Ireland and she became very good friends with Professor Daibhí Ó Croinin and the upshot of that was that her archive and that of her incredible husband, photographer George Pickow, who was with her on all her travels, was donated to NUIG."

'We're only getting started' 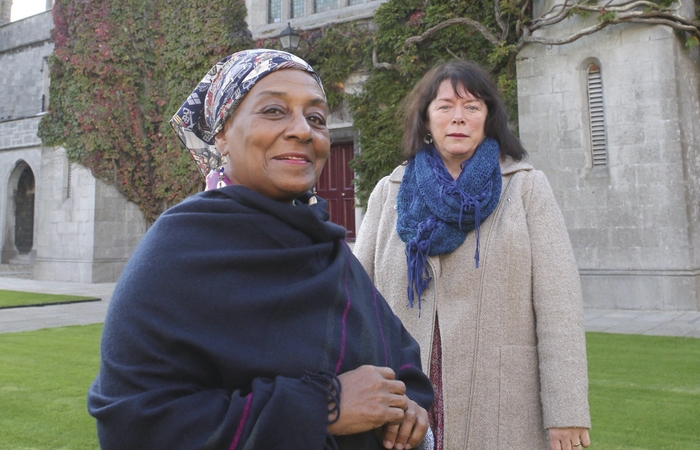 In 2013 Mary was awarded a Fulbright Scholarship to teach in New York and research blues. It was there she met Bertha Hope [pictured with Mary, above]. "She has an incredible history," says Mary. "Bertha's husband was Elmo Hope, a jazz musician and composer who played with all the greats of the fifties and sixties. Bertha herself is now in her seventies and still plays. We spent time together and were fascinated by each other’s stories in terms of music and so on and realised we should work together and we did a concert in New York. I then told her I was researching songs that had travelled from Ireland and Scotland to Appalachia. I introduced a lot of this music to Bertha and we spent a lot of time looking at it, and re-imagining it, and re-invigorating it, in a way that incorporated her history and my history.”

The singer readily acknowledges that Hope’s input had a huge bearing on From Mountain to Mountain. “She completely influenced the direction of the album," Mary says. "Bertha’s feeling for these songs was so interesting. She didn’t know the Jean Ritichie repertoire at all beforehand and she was fascinated by it. We’re still working on it, we’ve only started.

"We’ve had great fun together and it has been incredible working with her and I hope to work with her again," Mary continues. "She brought along her Afro-American female jazz group, Shirazette and Kim, and they are the anchors of everything on the album, they anchor it down into a sound. It was then the genius of Seamie O’Dowd and Cathal Hayden and Mairtín O’Connor who were able to weave their magic in and out and around and bring back all those other sounds that are synonymous with our own tradition.”

I ask Mary what it was like meeting Jean Ritchie? “Jean was a beautiful, gentle person, you’d know you were in the presence of greatness,” she replies. “She’d had a stroke in New York in 2009 and returned to Berea to live. She was 90 when I met her and she died just last year. When I met her there were other members of her family there, and musicians, all sitting around the kitchen table and chatting. I was asked to sing ‘Barbara Allen’ which I have done on a previous CD and I was influenced by her version of the song, it’s a memory I will have for the rest of my life.”

The album sleeve notes, by novelist Silas House, observes that while Jean Ritchie and Mary sound very different as singers "they are joined by the great emotion each of them manage to reveal in their song interpretations.

“I never had any intention of trying to sing like a mountain singer,” Mary declares. “I just sing like who I am, my voice and style are my own and I use it as the bedrock with the songs. These songs have a longer history than Appalachia, I would have heard them in other interpretations as well. There are hundreds of versions, they would have been styled into the Appalachian style when they arrived with the settlers, especially around Kentucky where Jean Ritchie came from. Led Zeppelin did a version of ‘Hangman’, Bob Dylan did ‘Pretty Saro’, and Rory Gallagher had a version of ‘The Cuckoo’. So how brilliant are those songs to inspire all these different interpretations!"

The album finishes with a lovely spoken-word excerpt from Jean Ritchie’s autobiography that wraps it things up perfectly. “I wanted the album to be inclusive in a very particular way of Jean,” Mary says. “Her autobiography gives a great insight into her life and shows you how the music was preserved and how significant her family were in the mountains. I asked a great friend who I’ve also been very inspired by, the actress Joanna Merlin, to do it and then I asked Mairtín O’Connor to take Jean’s famous song ‘Now Is The Cool of the Day’ and he plays a section of it under Joanna’s speaking the lines.”

Mary is deeply proud of the album and she has every right to be. It truly is the gem The Irish Times hailed it as. A July concert in Galway featuring all the musicians from the album is in the offing but in the meantime music-lovers of all stripes should lay their hands on From Mountain to Mountain.