A Galway City bar has launched a campaign aimed at students encouraging them to set up a tag team when out socialising. ‘Tag Team’ was the brainchild of General Manager Brian O’Toole who says that increasing incidents of young people failing to return home after nights out prompted his staff to do something.

“Our staff are mainly young adults and like all of us, they are affected by the perceived rise in missing persons especially after nights out. Social media has raised the profile of these cases but I found that it was a regular topic of conversation during staff meetings and generally during the working day. So I asked, ‘what can we do?’”

Tag Team will run during February and March and students from all over Ireland are encouraged to get involved in the campaign.

Amy Kelly, GMIT Students’ Union Welfare Officer says, “We think this campaign is a great idea as it gets students talking about not just going out but how they’re going to get home. That’s a very important conversation to have and this campaign seeks to simply spark the conversation that will lead to more awareness around how your night out ends. I would appeal to all students to get their tag team on and make “who are you taking home tonight” a conversation starter.

Jimmy McGovern, NUI, Galway Students’ Union Welfare Officer has also added his voice to the Tag Team campaign. “From the Students' Union perspective, a student's safety is our number one priority. Students walking home alone at night or venturing off from their group, is a time where they are most vulnerable. So we are urging students to make safety their number one priority, and to look out for each other when socialising at night. It is important to never assume that friends got home safely on their own, always find a way to contact them and ask. The Tag Team Facebook App is a fantastic initiative to ensuring students are in contact with one another as a means of returning home safely."

Marie Whyte, Console's Counselling Manager says, "I think this is a positive campaign and will create awareness around the importance of not only keeping yourself safe, but to also look out for the welfare of your friend(s ). Many people who self harm are under the influence of alcohol/drugs. Our 24-hour Suicide Freephone Helpline is available to anyone who might like to talk to a professional counsellor on 1800 247 247.

How To Set Up Your Tag Team

-Be an advocate for the campaign. Update your Facebook profile photo to the Tag Team campaign logo and spread the message with your friends.

12 steps to getting home safely

1. Plan your trip home as much as you plan your night out.

2. Pre-plan who you will go home with and make a date to get home safe – get tagging!

4. Have a taxi number on speed dial, pre-book it or Hailo.

5. Make sure your phone is fully charged before you go out.

6. Don’t walk around the city on your own – tag along with a friend.

7. Drink responsibly and know your limits when it comes to alcohol.

8. Don’t get separated from your tag team.

9. If in doubt and on your own, call a friend, family member and stay in a public place until they arrive.

10. In the event that you get separated from your tag friend it may help to have pre-arranged a place / time to meet or send a text before leaving to go home.

11. Leave a spare front door key with a friend.

12. Promote the campaign on your social networks. Be smart like Bill! 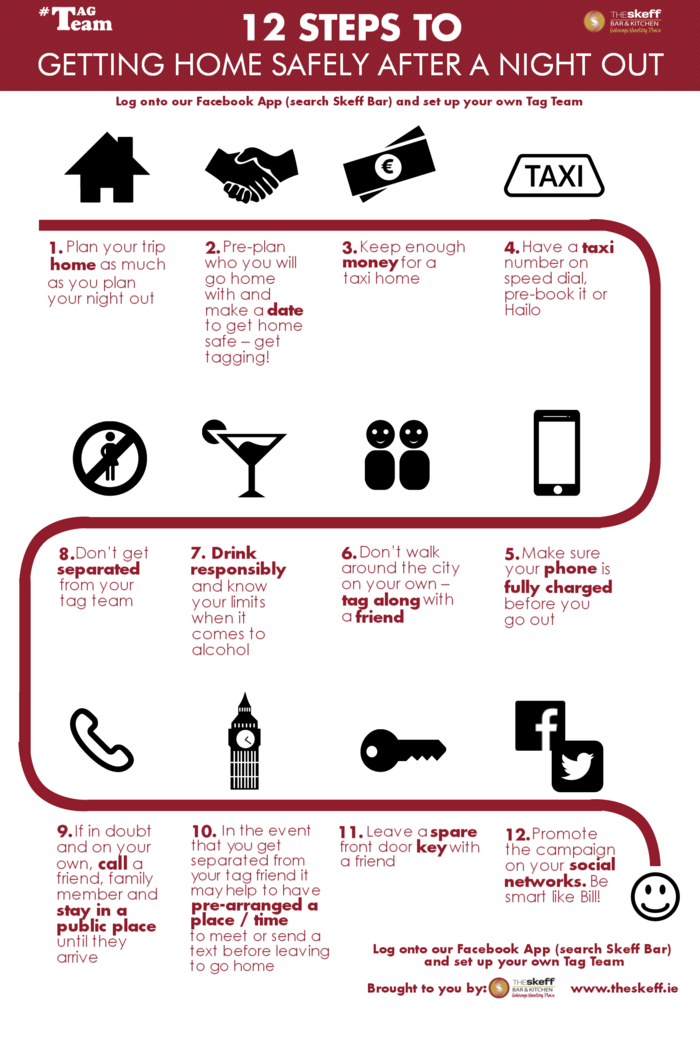