MENOPAUSE THE Musical, the hilarious celebration of women and 'the Change', arrives in the Town Hall Theatre next week for what should be a sell-out run. Starring X Factor sensation Mary Byrne, The Nualas's Sue Collins, Eurovision winner Niamh Kavanagh, and The Nolans' Linda Nolan, the show presents a cast of hormonal women, one-liners about memory loss, and innuendo-laden versions of pop classics.

This all-singing, all-dancing, laugh-a-minute comedy brings together four women at a department store's lingerie sale, who have nothing in common but a black lace bra and hot flushes, night sweats, memory loss, chocolate binges, not enough sex, too much sex, plastic surgery, and more.

Ahead of the show’s Galway run, Sue Collins shared her reflections on being part of this venue-packing smash. I began by asking do many men go along to the show.

“You’d get, at a push, four men on any given night so it really is targeted at the female audience,” Sue replies. “Funnily enough, you catch the man’s eye in the audience and he’s in tatters laughing with everyone else. They were probably dragged along to the show but they find it just as funny as the women do. We call it a research mission for the men!”

This is Sue’s first time appearing in Menopause the Musical and she is relishing the experience. “It’s great, I’m loving it and I’m really glad I did it," she says. "You do get stuck in the one thing, the Nualas is our own creation and we produce it ourselves so this is a change. When I was asked to do it I thought this could shake things up a bit and take me out of my comfort zone, it’s important now and again for all of us to do something different. Even though this is within the comedy arena it involves me working with different people and disciplines. The choreography is fun to learn and we’re playing big stages as well so it was an opportunity for me to branch out.

“I am working with three other women from completely different backgrounds and experiences and that has been really interesting. You can imagine the stories Linda Nolan can tell about her career and all the fabulous things she has done. Then there’s Mary Byrne from X Factor and Niamh Kavanagh who won Eurovision, and they’ve very kindly been saying to me that they have been learning from me as well in terms of the comedy which would be my forte. My singing voice wouldn’t be nearly as good as Niamh Kavanagh’s is for example, she has an incredible voice. When you’re working with people who have talents you don’t have you learn from it and get a little better at what you do. It’s been a great experience so far.” 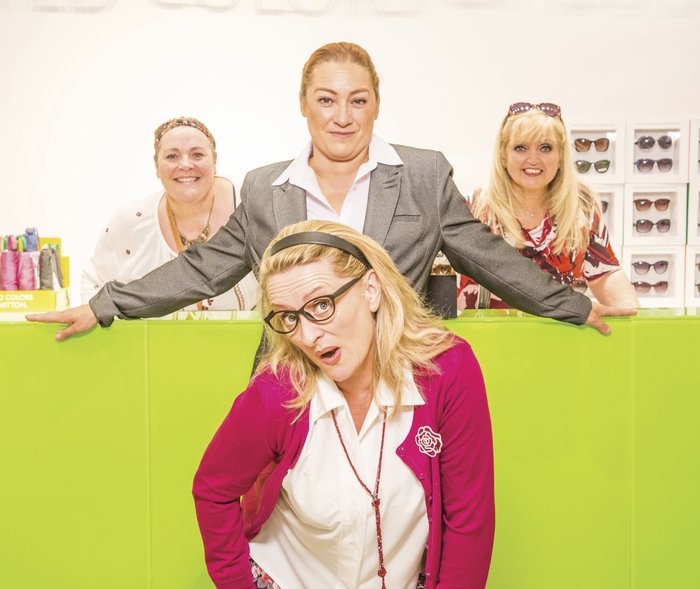 Amid all its laughter, fun and frolics, the show’s success is also due to the way it addresses the seismic personal changes which menopause entails. “The women sitting in the audience are going through it or have been through it or about to go through it,” Sue notes. “It’s a bit like going back to puberty, all those weird things that happen to you, and it’s so unfair, you’re at an age where you’ve raised the kids and should be settling down to have a bit of freedom and enjoying yourself, and then this thing comes along and you have your hot flushes, moods, insomnia, and everything else.

"What the show does is make light of all of that and makes women feel really good about themselves. There is a fabulous ‘reveal’ at the end which is a lovely celebration. It’s called the change for a reason and that’s because women are going into a different phase of their lives and there is a bit of letting go involved, and maybe you put on a few wrinkles and a few pounds but rather than saying ‘Oh God look at this’ the show is saying ‘Accept it and celebrate getting older, enjoy it, have fun.’ That’s why every woman in the room stands up at the end, it has that feel-good factor, and it is very, very, funny."

Sue concludes by noting that her character in the show is on a trip with her husband and she is trying to put life back in the bedroom. "There is a very funny non-speaking sequence I do in the lingerie department," she says. "It’s a situation where you have been with your partner for a number of years and things may not be as lively as they were before. Even though the show was first written quite a few years ago, it got it right in terms of what people can relate to, the women relate to every element in the show. The laughter it gets is unbelievable.”

Menopause the Musical runs at the Town Hall from Tuesday November 10 to Saturday 14 at 8pm. Tickets are available through 091 - 569777 or www.tht.ie