CREATIVE ASPERGER'S is the title of a fascinating art exhibition currently running in the Galway City Library comprising portraits of famous individuals who display signs of Asperger syndrome. The work is by Jody Mullarkey who himself has Asperger syndrome and thus brings a keen personal appreciation and insight into his portrayals of the featured personalities.

Asperger syndrome is an autism spectrum disorder that is characterized by difficulties in social interaction and nonverbal communication, alongside restricted and repetitive patterns of behaviour and interests. It differs from other autism spectrum disorders by its relative preservation of linguistic and cognitive development. An inability to be dishonest is another notable aspect of people with Asperger’s.

The syndrome is named after the Austrian pediatrician Hans Asperger, who, in 1944, studied and described children in his practice who lacked nonverbal communication skills, demonstrated limited empathy with their peers, and were physically clumsy. Asperger's achieved wider public awareness a few years ago with the publication of Mark Haddon’s multi-award-winning novel The Curious Incident of the Dog in the Night Time, the narrator of which is a teenager who has the syndrome.

When Jody meets me over an afternoon coffee to talk about his work I begin by asking him how he would describe what it is like to live with Asperger's. “I’m sensitive to loud noises, taste, smell and sight,” he replies. “But it also gives me a deeper awareness of things because I see things better, hear things better, smell things better. I see things from a different perspective. I question things outside the box. I’m not a sheep. I see life for what it really is without judging it. Everyone who is an ‘Aspie’ is generally that way I think.”

He admits that "being different" can make life difficult. “People avoid us like they avoid God because they are afraid of their own greatness," he says. "An ‘Aspie’ is closer to God because an ‘Aspie’ is free like a child. We hurt more because we feel more, we hide the feeling to protect ourselves. We can be overwhelmed by our senses but that makes us more godly. Maybe Jesus was an ‘Aspie’ because he ran away to the desert for 40 days to be away from people!”

When he was younger, Jody’s Asperger's resulted in his being picked on by some schoolmates and he even had to leave one primary school due to bullying. However today he adopts a philosophical view of those experiences: “They bully you because you are different, because you stand out, because you think differently and you’re not very social. They pick on a target that stands out because they are sheep themselves, they are afraid to pursue their own dreams and be themselves.”

Jody is certainly not afraid to pursue his dreams or be himself. Most people will know him from busking on Shop Street where he is a familiar presence, clad in a gray suit and belting out standards like ‘Dancing in the Dark’ and ‘(Everything I Do ) I Do It For You’. Alongside the music, art also figures strongly in Jody’s CV and Creative Aspergers is his seventh exhibition. Art indeed figures strongly in the Mullarkey family. Jody’s father, Jim, has published a collection of stories with Doire Press, his mother Holly is an art teacher and ceramic artist, his sister Anna plays and writes songs with My Fellow Sponges and another sister, Mia, is a film-maker. Small wonder then that Jody should also be highly creative. 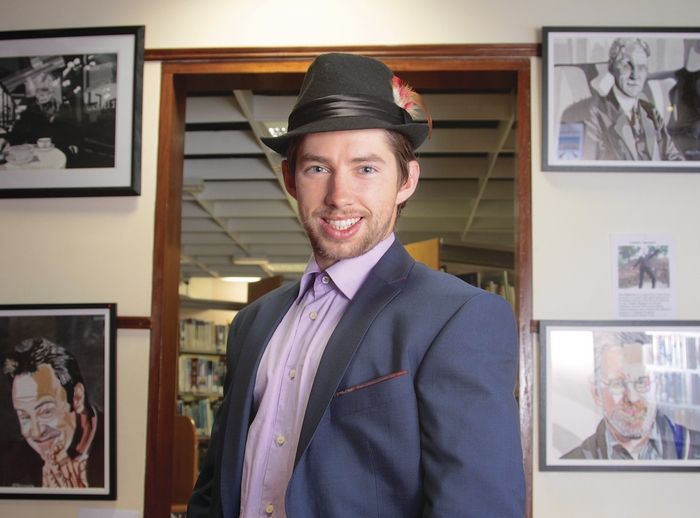 In Creative Asperger''s he presents portraits in different media, some in colour, some in black and white, of well-known figures like W B Yeats, Sean O’Casey, and Samuel Beckett, whose behaviour and character suggest they may have had Asperger’s. “I went on their personality traits and put two and two together,” Jody explains. “They tick all the boxes. They have the characteristics, they were odd, focused, passionate, it all adds up.”

Lest one doubts Jody’s assessment of these feted writers, it is backed up by leading psychiatrist Dr Michael Fitzgerald, who officially launched the exhibition. An acknowledged expert on autism, Fitzgerald is co-author of Unstoppable Brilliance; Irish Genius and Asperger’s Syndrome which contends that Padraic Pearse, Eamon de Valera, and Jonathan Swift, among others, showed Asperger symptoms like obsessional interests and misinterpretation of social cues. Swift used to run obsessively up and down the stairs of St Patrick’s Cathedral to get fit while Yeats did poorly at school and later had great difficulty in accepting his rejection by Maud Gonne. In his opening speech at the exhibition, Fitzgerald stated that when a family has a member with Asperger’s, “the family have to go on a journey with the person who has Asperger syndrome and not force them on our journey".

In his portraits, Jody treats the face like a landscape. While some of the pictures replicate familiar photographic images of his subjects, the strongest works in the exhibition are striking studies of figures like Bill Gates, Hans Christian Andersen, and Steven Spielberg which are bold and stylistically distinctive. There is also a fine portrait of his mother, Holly, in the same style. He describes the technique he used for these; “A lot of them are done with ProMarker on foam board, it makes a watercolour-like effect which has a lovely subtlety. It’s like a marker but it creates an artistic beauty. I’ve done a few actual watercolour paintings, such as one of Sean O’Casey, and it looks quite a lot like the ProMarker and working with it is similar as well. I used foam board because that is the only material that will absorb the ink. I’d done a little bit of work with ProMarker before. It’s good fun using it.

“I’m passionate about feeling and maybe that is what I am painting,” Jody continues. “I’m trying to paint their spirit, the feeling of their achievements, with that style of painting. It’s their spirit that made them great, their passion and feelings, their character. Maybe that is what we should convey as artists, without character and feelings it’s all just boring.”

Jody declares he is "very happy with the response" to the exhibition so far. “There has been a lot of interest in the work," he says. "I’d like to exhibit in a higher profile venue sometime but it is nice to exhibit in the library. It is suitable for writers, great minds, and entrepreneurs, that is what it is for, to celebrate the greatness of man. These people I have painted have changed the world. They might be ‘Aspies’ but they are great ‘Aspies’ and the exhibition is celebrating mankind.”

“We’re not idiots, we’re so much more” Jody says in conclusion as he stresses how much ‘Aspies’ have to offer. “What we can contribute could be truly amazing. I’m proving that more and more in the street, if I achieve amazing things in my life hopefully that proves how amazing my condition is. I can use it not as a crutch but as a doorway, a doorway to God and greatness and to inspire the ‘sheeple’, to make them more human.”