THE OSCAR nominated Song Of The Sea, the much awaited follow up to 2009’s stunning The Secret of Kells, also Oscar nominated, from writer/director Tomm Moore, is finally on general release.

When the academy award nominations were announced, Song Of The Sea surprisingly beat The Lego Movie for a place on the ballot. The cliché is, it is an honour to be nominated, but when you are running against Disney and Dreamworks promotional money, which was probably 10 times the cost of the entire production of Song Of The Sea, it really is impressive. The Irish film industry may not be able to match the budgets of live action cinema in the US, or even Britain, but animation can be a great leveller in that respect.

We have become so used to modern computer generated animation that when you see something like this, you are actually taken aback by its sheer beauty. Pixar can pull on our heartstrings, and Shrek and co will make us laugh, but few other animated movies in the last 10 years have genuinely felt like a work of art.

The story is inspired by fairy tales of the selkie, a kind of seal mermaid found in Irish, Scottish, and Faroese folklore. The selkie legend was explored well before in The Secret of Roan Irish, a really underrated John Sayles' film from 1994, but it is nice to see this unusual fairy tale brought back into life.

The story centres around Donegal lighthouse keeper Conor and his family. Conor lives on an island with his pregnant wife Bronach and son Ben. While giving birth to Saoirse, Bronach dies leaving Conor to raise two children alone. Six years later and the family have not recovered from Bronach’s death; Saoirse has never learned to speak and Conor, who dotes on and adores his daughter - who looks like her mother - ignores Ben, which leads to resentment between the two siblings. When it is clear Conor is struggling to look after the children, their grandmother takes them from the island to the big city. Being away from the sea affects Saoirse’s health, so Ben decides they must escape and make their way back to their father and the sea. 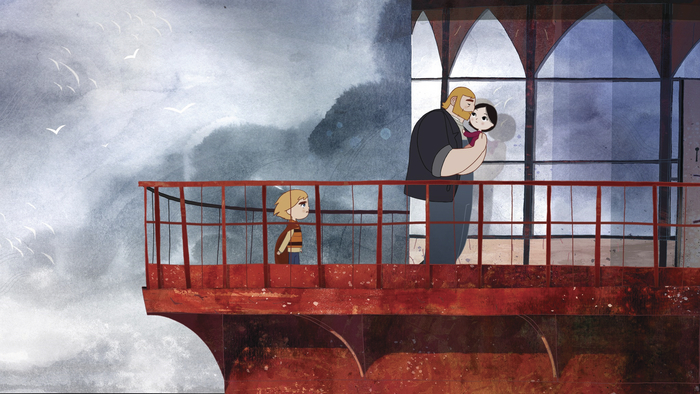 Song Of The Sea is really a step up from The Secret of Kells. Moore and his team have mastered their own unique style of animation, and you will not see anything like it from another studio. The score, written by Bruno Coulais and beautifully performed by Kíla, is the other star of the film. It is a wonderful companion for the charming animation. The voice actors are familiar at first with Moone Boy’s David Rawie and Brendan Gleeson catching your ear early, but slowly, like all good animated movies, you forget the actors and the drawings take you in as the characters become their own people.

The film has more in common with Hayao Miyazaki than western animation and it is wonderful to see something truly unique coming from Ireland. It is on another level to all the other children's movies released this year.