With DruidShakespeare, the Galwegians latest epic venture, that is patently not the case; Druid’s only previous engagement with Shakespeare was the 1981 production of Much Ado About Nothing. It is all the more impressive therefore to witness the vigorous, richly imagined, and thrillingly achieved DruidShakespeare in which Garry Hynes and her outstanding company triumphantly appropriate the four plays of ‘The Henriad’ - Richard II, Henry IV parts 1 & 2, and Henry V.

The audience assembled, pre-show, in the nearby Hall of the Red Earl, and from this starting point the cast process into the Mick Lally theatre where we pass through the foyer wherein a gravedigger is working at a raised plot of earth. In the auditorium itself, Francis O’Connor’s set comprises a dark earthen floor with an overhead gangway, the simple throne which will be fiercely contested over the ensuing six and a half hours and off to the side some hanging apricots. 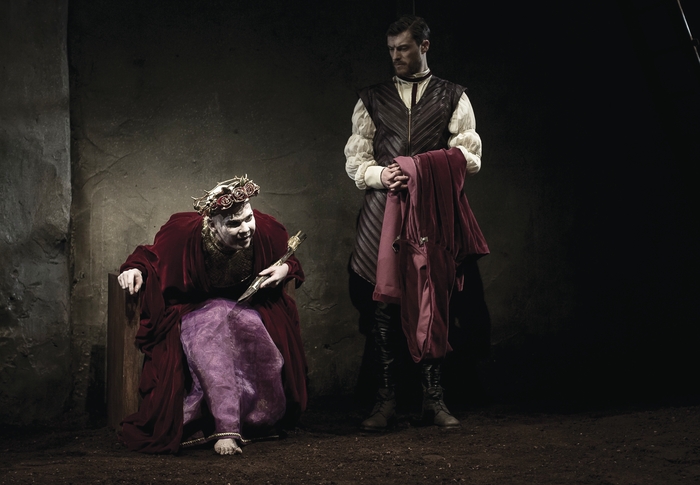 Marty Rea, as Richard II, makes the most striking entrance, with his head shaved and white-painted. Bedecked in gold and purple robes, he looks like some dynast from ancient Persia rather than a Plantagenet. Rea’s Richard is child-like, capricious, and prone to sudden squalls of rage, yet his overthrow by the usurping Bolingbroke/Henry IV (Derbhle Crotty ) is also full of pathos. It’s a terrific performance from Rea, which sets the tone for the absorbing portrayals of battling and embattled kingship which are to follow. The crown itself which passes from one ruler to the next, features red roses and a twisted skein of golden thorns, a fitting visual symbol for the travails of these monarchs. The costumes (designed by O’Connor and Doreen McKenna ) are superb, brilliantly blending elements of modern dress with medieval cowls and cloaks.

In Mark O’Rowe’s deft adaptation, three of the four plays clock in at about 90 minutes, with Henry IV Part 2 being a mere hour. It gives the whole evening great momentum, and despite its length proceedings never flag. O’Rowe’s one significant alteration is to move the scene where Bardolph, Pistol, et al, take their leave of Mistress Quickly’s tavern, from the middle of Henry V, and make it the final scene of the evening. It works very well, ensuring the play ends on a poignant note, focusing on the common folk that contrasts tellingly with the lofty ‘games of thrones’ that takes up much of the rest of the action. 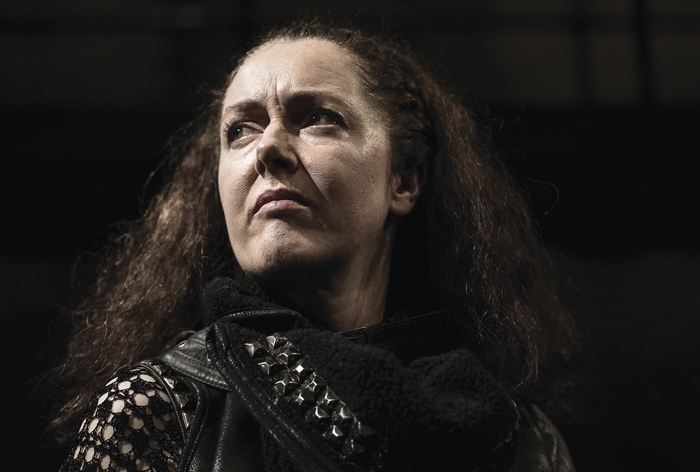 The performances throughout are wonderful, Crotty’s Henry IV increasingly beset by illness and cares over his dynasty; Aisling O’Sullivan’s lithe and livewire rake Prince Hal maturing into the warrior king Henry V; Rory Nolan’s sumptuous Falstaff; Garret Lombard’s Hotspur; Aaron Monaghan’s peg-legged Pistol and his chorus from Henry V. The teeming canvas of Shakesperean characters, rollicking action, and blend of high poetry and earthy comedy, are viscerally incarnated with in-your-face immediacy and intimacy in the Mick Lally cockpit, such as when rain lashes down for the Battle of Agincourt, churning the ground into mud.

From first to last, Garry Hynes, her company and 13-strong cast, deliver an exhilarating production that shows, at 40 years of age, Druid is still at the very top of its game.