COBAIN: MONTAGE Of Heck, the extraordinary new documentary on the life of Nirvana’s Kurt Cobain, will get a second screening at the IMC Galway cinema this week. Owing to overwhelming public demand, the film, written and directed by Brett Morgen, with Kurt’s daughter, Frances Bean Cobain, as executive producer, will be screened this Wednesday [April 22] at 8.30pm.

The film is a harrowing, but candid, and engrossing study of a short, troubled, often unhappy life, told through a wealth of archive home movies, concert footage, selections of the songwriter’s artwork, diaries, and journals, recorded phone messages, and interviews - both new and from the archive. It's acheivement is in getting past both the myth, and the most well worn aspects of the man's life, to the core of what shaped and destoryed him.

While Kurt’s early years were examined in detail in Charles R Cross’s excellent biography Heavier Than Heaven, Montage Of Heck goes further, mainly through the archive footage and interviews with Kurt’s mother Wendy and father Don - the first Cobain documentary to my knowledge which features both.

The product of a marriage that took place too young and too soon, home movies show toddler Kurt as the apple of his family’s eye, the centre of attention, the little prince. Yet behind this happy appearance, comes the revelation that his father, unable to handle his son, would sometimes beat him. However Kurt’s descent began with his parent’s break-up. In its aftermath, both effectively rejected him and he was moved from house to house, from family member to family member. The instability of this period, coupled with the loss of anything like familial love or respect, shattered his self-confidence, depriving him of a sense of self-worth - states that would plague him throughout the rest of his life.

Montage Of Heck is also a study in media manipulation, the intense condtradictions that Cobain stood for, fought against, and embodied, as well as a parable on the destruction wrought on a sensitive individual by the letahl combination of drugs and intense self-doubt - footage of him towards the end, bare chested and being asked to hold his daughter, reveal a man on the very edge, barely out of a drug induced stupor. It is one of the most upsetting moments in the film - for so many reasons. 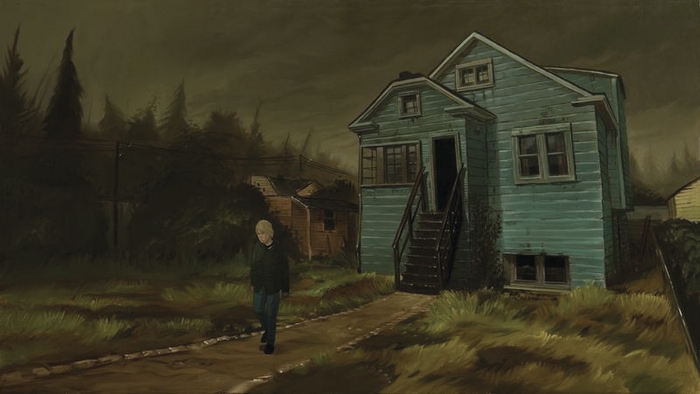 That change from happy child, to troubled teen, to traumatised adult is captured through the home movies, journal entries, and artwork, as well as numerous animated segments, accompanied, importantly, by candid recollections from Kurt himself. Most films display such sequences through re-enactments, but the value of animation in this case is that, despite the creative licence that needs to be taken in imagining setting, body posture, atmosphere, it still feels more real than having actors portray the moment - not least because a drawing can capture the physical essence of a person in a way an actor could not, thus making it more like watching actual footage.

The overall effects of such sequences - sound, text, music, image - make Montage Of Heck a sensory assault, and a collage on film. It can, at times, be overwhelming, but gives it an individuality, and creates sequences and impressions that linger long in the mind well after the final credits have rolled.

The soundtrack is another highlight. While classic tracks are featured, more interesting are the demos and rough, early drafts of songs. A nice touch comes with ‘Smells Like Teen Spirit’ being performed by a choir. It not only gives a new dimension to the song, the haunting, unfamiliar, arrangement, lends increased power to the sequence it soundtracks.

For booking contact the IMC Galway, Headford Road, through 091 - 566771 or www.imccinemas.ie