In a famous speech in 1992 Britain’s Queen Elizabeth referred to having just endured ‘an annus horribilis’. Well at Christmas 2014 any member of the Irish Government could make the very same statement.

Indeed Minister Leo Varadkar last week claimed that 2014 had been “quite a good year for Ireland but a terrible one for the Government”. The irony, is that this was supposed to be the year of triumph for the Fine Gael-Labour coalition.

It is a year almost to the day since Ireland exited the EU/ECB/IMF bailout and 2014 was supposed to be when FG/Labour became free to exercise power on its own terms and control the political agenda.

Throughout the ‘Troika era’ however Insider kept referring to the Government lacking ambition, being content to merely pass the tests set for it by the Troika but with no real idea of what else it wanted to achieve.

Since the exit from the bailout, the FG/Labour performance has led many to conclude that the successes of the first three years of the Government’s term were down to the micromanagement of the Troika and had little to do with the Government itself – indeed we have even seen the previous FF-led government starting to pick up some credit.

Early 2014 was dominated by controversies around An Garda Síochána, principally related to the quashing of penalty points. Insider was flabbergasted by the Government’s handling of this, which also did huge damage to the Gardaí.

Insider could not understand how FG, which traditionally sees itself as the law and order party and defenders of the force, could not see the damage being inflicted and that was being made worse by the day. To make matters worse, Sinn Féin emerged with great credit for pursuing the case with vigour, which must have been galling for FG.

The Local and European elections brought more misery for the Government. Again, as the recently deposed FG strategist Frank Flannery noted at the time, it seemed to take an approach that was the very opposite of best practice electoral strategy, digging holes for itself and seeming to invite and prolong controversy at the height of the election campaign. An appalling mess over medical cards in the week leading up to polling day summed it all up.

It has often been said that had the ill-fated Titanic simply ploughed straight into the iceberg instead of trying to avert it, it would almost certainly have survived intact. The Government appears to be taking this advice to heart, ploughing headfirst into every danger. 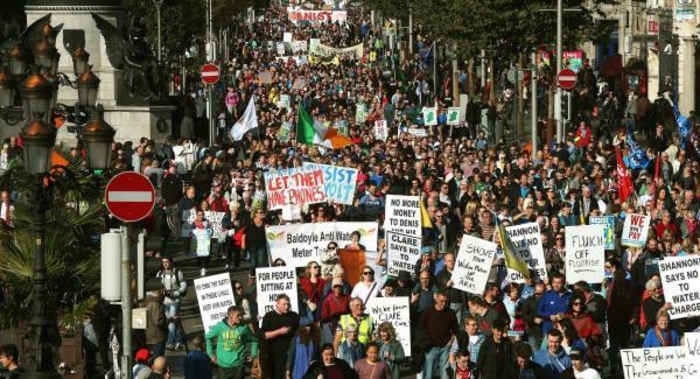 Events this autumn though really took the biscuit. Quite frankly the mishandling of the water charges issue could very well be the thing that ends this Government’s hopes of re-election.

The revelations garnered by Galwegian Sean O’Rourke from Irish Water CEO John Tierney regarding the amounts spent on consultants’ fees back in January really set the scene for this controversy.

At the time Insider said this was a serious problem for the Government and could be something of a game-changer. While water charges were always going to be controversial, there was a considerable segment of the public willing to accept or at least entertain the ‘conservation’ argument and the need to raise money to spend on water infrastructure.

When these revelations emerged however many of these people immediately thought ‘another scam’. When Taoiseach Enda Kenny kept referring to Irish Water as a ‘job creation vehicle’ he only reinforced this impression. Nobody in Government circles however seemed to think of telling him to stop digging.

The panic in Government in October and November was a further reflection of how little it appreciated what an issue this had become. There were also two large scale protests that spooked the Government, forcing it into a U-turn.

The irony is, that as Green Party leader Eamonn Ryan has noted the revised charges structure is arguably the worst of both worlds, doing little to encourage conservation while still imposing an extra cost on households. Or as others have put it what we now have is an elaborate and costly accountancy exercise.

The scale of the panic reached a crescendo when several Labour TDs called for a referendum to enshrine State ownership of Irish Water into the Constitution. This would act to restrict a future government’s ability to privatise the company. This is something that has been done before – in 1983 when the Pro-life amendment was passed. Such was the fear and panic on the Labour benches however that this parallel did not dawn on the party. We then had the amusing sight of Fianna Fáil joining Labour in its calls – FF was the party primarily responsible for the 1983 debacle so there was some element of consistency on their part – but it was laughable to hear Labour call for this.

Inevitably comparisons have been drawn between Enda Kenny’s water charges and Margaret Thatcher’s poll tax. On closer inspection, the more appropriate comparison may be Ted Heath, a prime minister lampooned in Britain as weak, ineffectual, and prone to doing a U-turn at the first hint of dissent. The Government now resembles a substitute teacher that cannot control the class.

Also, in 1979 Thatcher came to power largely on the basis of an implosion by her predecessors – Heath and the two Labour prime ministers Wilson and Callaghan who led Britain onto the rocks in the disastrous 1970s – but she used her mandate radically, forced through changes that few thought she would try, and stayed in power for a decade. The FG/Labour government also came to power – with a majority far bigger than Thatcher enjoyed in 1979 - on the back of Fianna Fáil’s self-destruction, yet it has used its mandate tepidly, with little or no vision, and now looks like it may very well be ejected from office at the first time of asking.

Insider is focused on looking back at 2014 so will not make any detailed forecasts as to what may happen in the next election, but it is fair to say that Independents and smaller parties are on course to do well. Indeed 2014 was a good year for them – three by-election victories, two for the Socialist Party, and one for Galwegian Michael Fitzmaurice in Roscommon/South Leitrim- coupled with a strong showing in the local elections and soaring opinion polls.

It was also a good year for Sinn Féin. Having made modest progress over a number of elections, opinion poll ratings in the last two years suggest the 2014 local elections would prove a ‘breakthrough’ and so it was with the party polling more than 15 per cent of the vote and expanding its presence in terms of geography and social class. The party also had an excellent European election and allowed it to claim that everyone across the 32 counties has an SF representative.

For FF it was a strange year. There have been continued murmurings of discontent about Micheal Martin’s leadership and the party’s opinion poll ratings have not been great – they would suggest the momentum which appeared to be building during 2013 has not been maintained and that the party, while still ahead of its disastrous 2011 rating, has even slipped a little.

The local elections were quite satisfactory with FF achieving a vote share broadly in line with its 2009 showing, something opinion polls suggested was not likely. This led to speculation that the polls under-estimate FF support levels. Furthermore, the party unexpectedly emerged as the largest party in terms of seat numbers. It has yet to win a by-election though (something it will expect to rectify in the Carlow/Kilkenny contest next spring, where it is a strong favourite to win ) and had a disappointing European election.

Back in County Galway

It was a bad year for Galway East’s Ciaran Cannon who lost his Junior Ministry. Galway now has no senior or junior minister. There had been some suggestion that Galway West’s Sean Kyne (pictured above with Dep Brian Walsh ) would be promoted but, along with Galway East’s Paul Connaughton, he is seen as a thorn in Enda Kenny’s side.

Dep Kyne however remains Galway’s best hope of a ministry for the foreseeable future. Quite frankly he is the only Government TD in Galway West who has made any sort of impression. Brian Walsh re-joined the party this year but continues to struggle badly in the Dáil while Labour’s Derek Nolan backed the wrong horse in the Labour leadership race and continues to suffer from the backlash against the party.

Among the FF TDs, Éamon Ó Cuív has continued to baffle and amuse in equal amounts with his pronouncements on the state of the party. The real entertainment promises to be in Galway East however with Michael Kitt – long-serving but low-key – going head to head with Colm Keaveney – colourful, outspoken, but with a sceptical grassroots to win over – for survival.

Finally we have Independent Noel Grealish, from whom little has been heard but who is well-placed to retain his seat in Galway West for reasons of geography and especially with the surge in support for Independents.

Next time out Insider will look at what 2015 might bring for all these people. In the meantime he is off to enjoy a restful Christmas – and advises all other political players to do likewise ahead of what promises to be another tumultuous year!