The national media is putting pressure on the two great Civil War parties to call a truce following the next general election so that an historic Fine Gael/Fianna Fáil government can be formed. This would-be Fianna Gael coalition – political commentators argue – is essential if the State is not to fall into the clutches of Gerry ‘Grizzly’ Adams.

The argument being made for such a coalition is that there is essentially no difference between Fianna Fail and Fine Gael, both being centre right parties. However, Insider is sorry to disappoint our betters in the Dublin 4 media, but there is a sizeable percentage of Fianna Fáil grassroots supporters who would oppose such a development.

After the decimation of the Irish economy there has been quite considerable soul searching among the soldiers of destiny. Many of those who remained within the party realised the fault for the boom and bust lay at their door. The basic problem was the leadership blindly followed the “greed is good” economic policies of the PDs. That soul searching has led many in the grassroots to conclude the party must return to the radical policies of de Valera’s Government of the 1930s.

Initially it seemed Micheál Martin was on the same wavelength as he began speaking of Fianna Fáil’s radical roots from the 1920s and 1930s. However, as his performances, and those of his frontbench in the Dáil, have shown, the parliamentary party leadership is actually no different than Bertie’s gang.

It appears to Insider and to many within the FF grassroots, that these leaders have only one thing in mind - power for power’s sake.

There is one serious exception – Éamon Ó Cuív. Insider was suspicious of Dev Óg – as Gulliver aka Proinsias MacAonghusa dubbed him in his weekly Sunday Press column back in the 1980s – when he first launched his political career, but his non-stop work ethic is impressive. Plus, he seemed to be fuelled by a political ideal that put the Irish people at its heart, not the chancers, bankers and developers, that hovered around Fianna Fáil ministers in search of rich pickings. His politics were and are worlds away from the sleaze of the FF tent at the Galway Races and the so-called Celtic Tiger.

Indeed, in the context of the present push to have FF jump into a bed with Fine Gael, Dep Ó Cuív would be diametrically opposed. While he has not said it publicly, privately he admits having no difficulty going into government with Sinn Féin. In fact, Insider believes that would be his preferred option. It would also be the preferred choice of many grassroots members Insider has spoken to.

Yes, the IRA was involved in murder and mayhem, but so too were many of our grandparents and great-grandparents during the War of Independence. Most importantly SF has seen the errors of its ways and made its peace with the world - north and south of the border.

There is another important factor: in many ways Fianna Fáil bears a responsibility for the ‘Troubles’. The State, under FF’s stewardship, abandoned the Catholics of the Six Counties, not only in 1969, but decades before that. This is something not lost on members of the ‘Republican Party’. And that gut feeling of responsibility and the need to embrace Republicanism contrasts markedly with Fine Gael, which is pro-British to its core. As for the scurrilous nonsense about paedophiles in SF – everyone recognises it is a pathetic and vain attempt to deflect from the water tax scandal.

For many ordinary Fianna Fáil members, Dep Ó Cuív is the obvious man to take the reins of power within the party. Under his leadership FF could regain a sense of dignity. In order to do that, he needs to pull off a significant gain within his Galway West bailiwick to make a serious challenge to Dep Martin after what is expected to be a disastrous general election for FF. 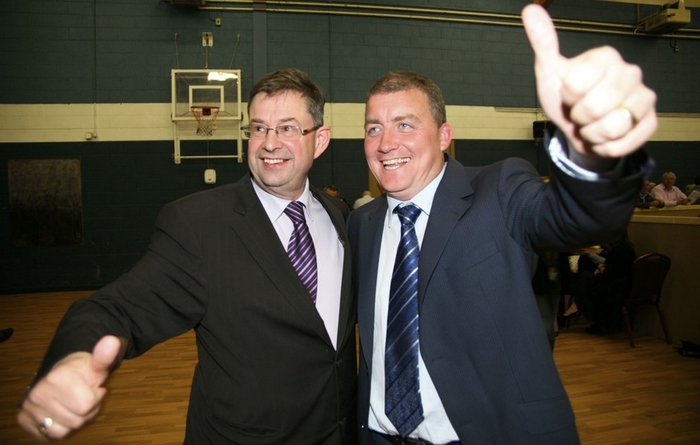 Insider thinks Fianna Fáil could take back a seat within the city at the next general election as there is one seat up for grabs. The first four seats will go to Dep Ó Cuív, Independent city councillor Catherine Connolly, Fine Gael TD Brian Walsh, and probably Independent TD Noel Grealish. The fifth seat will be a battle between FF (probably the affable Cllr Ollie Crowe ) and Fine Gael TD Seán Kyne.

Readers might be surprised that Insider excludes Sinn Féin senator Trevor Ó Clochartaigh from the reckoning. A brief explanation: for a Connemara candidate to take a seat s/he would need at least 20 per cent of the vote in that area. Trevor has been a serial loser in elections, no matter what colours he has run under: Labour, Independent Labour, or Sinn Féin – he is no vote getter. On top of that, Insider has heard FF is to run Christina Nic Dhonnacha from An Cheathrú Rua, who will take votes from SF, especially as she actually worked in Trevor’s office before realising that Fianna Fáil was the way forward.

Sen Ó Clochartaigh needs a significant vote from the city, but the urban vote simply does not go to outsiders. Even Dep Ó Cuív can only garner 5.8 per cent of the city vote. True, Dep Seán Kyne took 18 per cent of the Connemara vote and got elected, but he scraped in thanks to the transfers from three other FG runners in the field. Sen Ó Clochartaigh will not have that luxury.

Both FG and FF hope Sinn Féin, now stuck in a hole with Sen Ó Clochartaigh, will keep on digging. Meanwhile, the dogs on the streets of Ballybane are barking out the name of a young SF councillor; fortunately she will be overlooked in favour of the Senator.

It is in this context Fianna Fáil can take sufficient transfers from Sinn Féin and the huge array of Independent candidates that will be running with their anti-water tax programmes. Being in opposition both in the Dáil and the city council will also be an advantage.

Fine Gael will suffer a battering over the water charges, its loss will be FF’s gain. By running someone like Cllr Ollie Crowe, born and bred in Bohermore, with a down-to-earth personality – FF in Galway West could surprise everyone, especially Micheál Martin. Dev Óg might soon be leading Old Dev’s party!