When watching a film, one often fails to appreciate the sheer scale of the process and the work that goes into every little detail, every creative intricacy, that fills the screen.

Regardless of the genre or style of the project, continuity and detail are key components, right down to the cover of a book, a poster glimpsed in the background of a scene, or the costumes which adorn our favourite film icons. All of these seemingly inconsequential items are central to building the world in which the story and its characters frolic about.

For those who have seen Wes Anderson’s latest masterpiece, The Grand Budapest Hotel, it is hard to miss the detailed and visually-striking props and sets that are crucial to the plot and the director’s specific vision.

Trawling through the list of credits rolling at the end of the film, you will find Welsh-born, Dublin-based, Annie Atkins, lead graphic designer on the project and the innovative talent behind the most eye-catching props on screen.

While it may be the biggest, TGBH is not the only project Atkins has turned her hand to. Since 2008, her IMDB profile has grown with exciting pace, working on many internationally-recognisable productions, including Vikings, Titanic: Blood and Steel, The Tudors, and most recently Penny Dreadful and The Boxtrolls. Off the set, Atkins runs her own studio in Dublin where she works as a freelance artistic director and photographer, working on film, theatre, and events posters, photography, and some advertising projects.

With an illustrator for a mother and a photographer/designer for a father, who run a small studio in north Wales, Atkins considers graphic designing to be a hereditary thing; coursing through her bloodstream.

Having studied visual communication design at Ravensbourne, London, Atkins initially decided on a career in advertising, working in Reykjavik, Iceland, however she soon relocated to Ireland, completing a master’s in film production in UCD.

As a graphic designer for film, Atkins’ role is primarily to make props and set-pieces which the actors can interact with on set. “Depending on the period and genre, these can be telegrams, newspapers, love letters, shopfront signage, cigarette packaging, fake social media sites,” she explains. “Some of these pieces are copies of historical documents — like the Proclamation, or Edwardian postage stamps for example — and other times they have to be more inventive, like imaginary book covers for Wes Anderson.”

To accurately develop props to suit the time period or visual aesthetic of the production, Atkins studies the ‘props’ of real life. She has amassed a collection of antique items which inspire her when dreaming up her on-screen creations. “Design for film is always quite physical – you have to make these pieces as tangible objects for the actors to handle on set,” she says. “That means you really have to find physical pieces from the time to copy. It's no good google image searching pieces – you need to feel the weight of these things in your hands, understand the texture of the paper, and the scale of the text. I have a big collection of ephemera from around the world now.”

This interest in quirky historical items has drawn her towards period films, where there is a wealth of opportunities for hands-on graphic design in a variety of mediums, such as pen and ink, calligraphy, sign painting, typewriting, and wax seals. “I think it's probably the same reason that most people want to watch and make so many period films – we want to be taken away to a different world and a different time.

“It's fun to research a piece and find all the weird and wonderful things they sold and advertised back in the day. I love the Victorian adverts for lotions and potions that could get rid of your freckles and your anxiety in one go. It makes me wonder how ridiculous the products we sell today are going to seem in 100 years' time.” 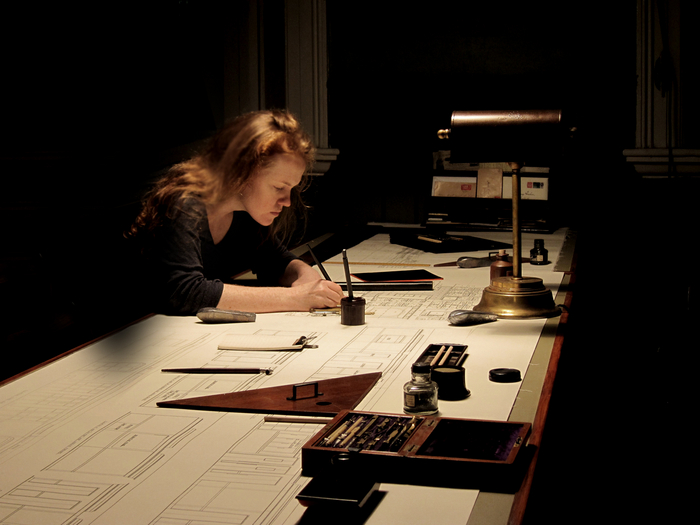 While Atkins relishes the chance to work on period productions with a twist, her favourite job was working with acclaimed director Anderson on constructing his imaginative visual world. Set in the quasi-Fascist era, eastern European state of Zubrowka, the film follows the exploits of hotel concierge, Monsieur Gustave H (Ralph Fiennes ) and his protege Zero (Tony Revolori ), as they escape the clutches of the all-powerful Desgoffe und Taxis family, helmed by the frighteningly spoilt Dmitri (Adrien Brody ) and his sociopathic lapdog JG Jopling (Willem Dafoe ), after Gustave is framed for the murder of the family’s matriarch.

Anderson recruited Atkins out of the blue to be his lead graphic designer, a position which carries a great deal of weight on his productions. Having worked on The Boxtrolls, an animated feature for Laika studios, a fellow designer recommended Atkins, and the phone call was made, leaving her “speechless”.

From there work began in earnest, with principal photography starting on location in Berlin and Gorlitz, Germany. Anderson’s style, alarming attention to detail, and vibrant filmic vision developed an exciting, hands-on atmosphere. Atkins worked closely with Anderson, production designer Adam Stockhausen, prop master Robin Miller, and set director Anna Pinnock. “It was quite intense – we developed a way of working very quickly and very intensely, mocking-up upwards of 20 different versions of some props in a day at times.”

Of the many props she worked with, Atkins created them with the support of fellow designer Liliana Lambriev, “bashing through layouts and doing lots of folding and sticking and stitching and ageing”. Among those pieces were passports, official documents, developing individual handwriting styles for each character, newspapers, police reports with Jeff Goldblum’s fingerprints, using Tilda Swinton’s lipstick on a love letter, tattered telegrams covered in blood, peculiar hotel signage, carpeting patterns, and those delightfully pink Mendl’s pastry boxes strewn throughout the film.

Her own personal highlight is a very significant item, one which opens and closes film: “My favourite piece is probably the Grand Budapest book itself. It's nice to have a prop with the film's title on it – it's pretty special to me.”

Annie Atkins will be in conversation with actor/director Hugh O’Conor at the Aula Maxima, NUIG, this Sunday July 20 at 4pm, as part of the Galway International Arts Festival’s First Thought Talks series. Props from TGBH will be on display. Tickets available through www.giaf.ie