Was the Treaty the means that gave Ireland “the freedom to achieve freedom”, or was it a betrayal of the ideal that had been fought for since 1916 - an Irish Republic?

On December 6 1921, the Anglo-Irish Treaty was signed in London by Irish republicans and members of the British Government.

It marked the culmination of the War of Independence and Britain's (reluctant ) recognition that Irish independence and self-determination could no longer be denied or withheld by violence and force of arms.

For Ireland it marked independence for most of the country (partition had already occurred in May 1921 ), via the establishment of the Free State, an independent entity still some way short of the Republic. The Treaty was only narrowly approved in the Dáil by 64 votes to 57. The public were also divided, with neither the pro or anti-Treaty Sinn Féin wings winning a majority of votes at the June 1922 election. The Civil War would begin by the end of the month. 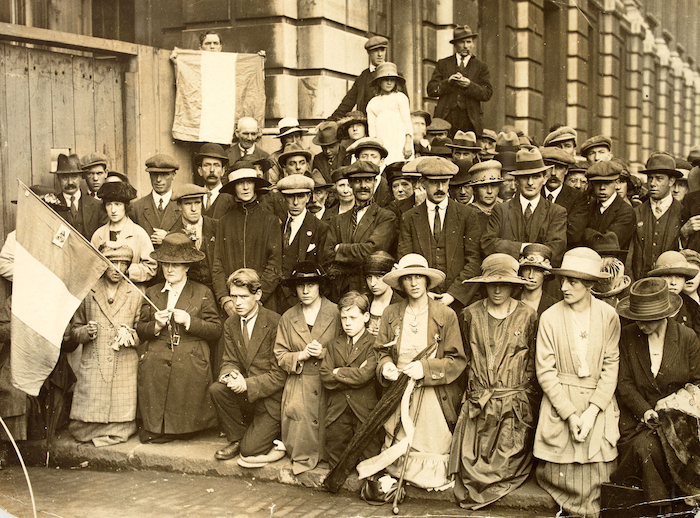 Crowds holding a prayer vigil outside Whitehall during 1921 during the Treaty negotiations.

To mark this seminal moment in Irish history - the largest transfer of power within the country since the 17th century - the Galway Archeological & Historical Society, and the Moore Institute, NUI Galway, will host an online lecture, ‘Was it wise to sign the Treaty?’.

The lecture will be delivered by Dr Mary Harris, who will consider the implications of the Treaty for the Irish Republic, the North, and Ireland’s relations with the wider world.

Dr Harris studied at University College Cork and Cambridge, before joining the History Department at NUI Galway in 1996. Her teaching has focused on 19th and 20th century Ireland. She is a member of the state’s Expert Advisory Group on Centenary Commemorations.

This online lecture will take place on Monday January 17 at 8pm. To register to view, send an email before the date of the lecture to [email protected]