THE VIBRANT colours and abstract forms of the paintings of An Post worker Jeffrey Hirst have been gaining positive attention in recent times - from buyers, curators, and the public - and it comes during an unprecedented period, the most intense and busy he and his colleagues have ever known.

The Englishman is taking it in his stride though. He and his colleagues know the parcels they send out are a great boon to recipients in this time of restricted movement and social distancing, while Jeffrey’s artwork is similarly inspired by a desire to inject colour, joy, and a sense of wonder in its viewers. 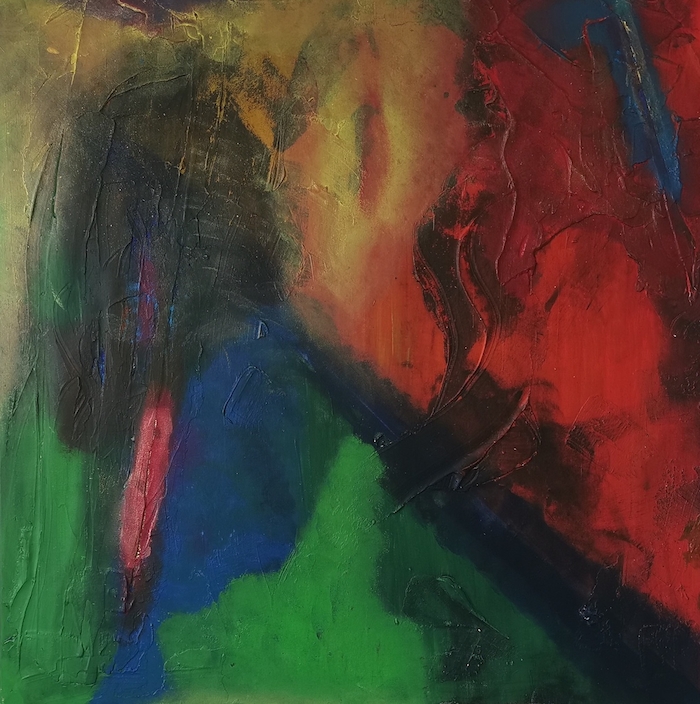 Jeffrey is originally from Birmingham, England’s second city, the birthplace of the industrial revolution and heavy metal (“Ozzy Osbourne was a big part of Birmingham culture when I was growing up,” he says ), and a city of art galleries, including the Birmingham Museum & Art Gallery, and the IKON gallery of modern art. It was these latter places that energised the young Jeffrey’s creative impulses.

“Growing up in Birmingham we had wonderful galleries around the city centre, and I was fascinated by art and artists from a very young age,” he tells me during our Monday afternoon interview. “I would be looking at all the wonderful works in the IKON - I eventually had a piece of mine displayed there - where you’d see artists from around the midlands.” 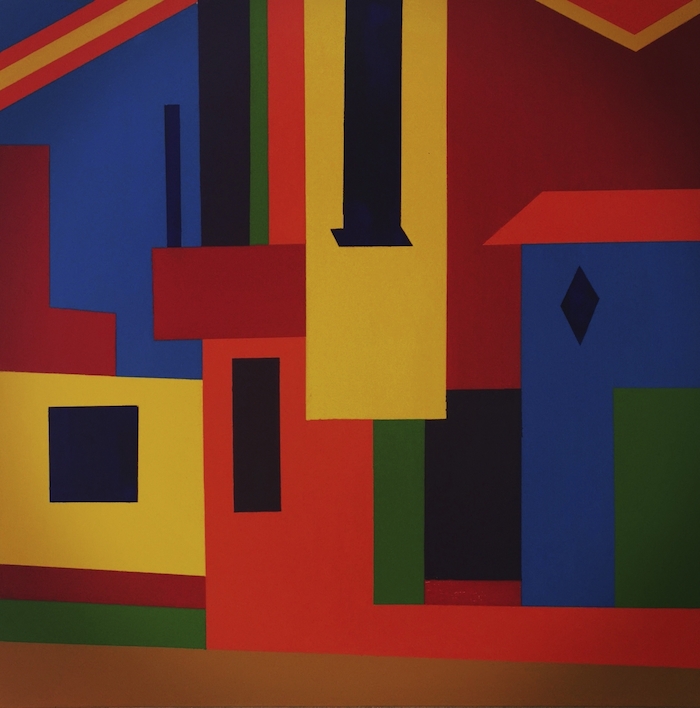 Jeffrey studied graphic design in his native city, before studying at Solihull Art College. “Birmingham was great because it’s a real melting pot of different ideas and different cultures, and that was formative,” he says.

Another key influence was New York, where his mother worked for a time. “I was fascinated by the New York art scene as well - Basquiat, Warhol - they were massive influences for me,” he says. “Anytime I’ve gone to New York, I’ve let myself get lost in the city, just wandering around, especially South Central Park, with a notebook, sketching what I see.”

Ireland, specifically the Burren in County Clare, has been home to Jeffrey since 2018, and here too, he finds a constant wealth of inspiration for his work. “I’ve been coming to Ireland since I was a kid,” he says, “and now, when I look out my window and see the birds or the hills, there is always something inspiring. It’s amazing how much inspiration you can get from just looking around. I’m always sketching in that notebook.” 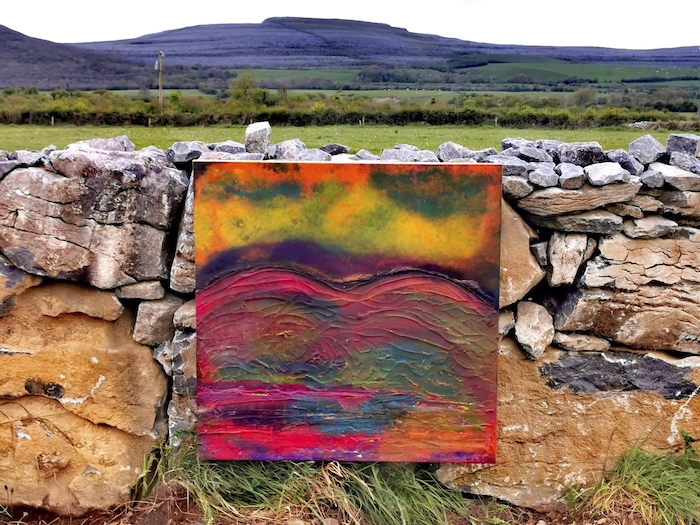 Jeffrey originally worked at Birmingham International Airport, and then at Shannon Airport after his move to Ireland. The Covid pandemic saw him laid-off at Shannon, but he quickly found work with An Post and today works at the An Post Mailing Centre on the Tuam Road in Galway. It has been quite the experience working in such an industry during a pandemic.

“It’s been absolutely mental,” he says. “Shops are shut, people are at home, they can nearly only buy from their computers, and then you get Black Friday, Cyber Monday, and Christmas all coming almost at once. It was this tremendous amount of parcels and mountains and mountains of boxes. We were working six days a week, then seven. Staff who have worked there for 20/30 years were saying they never saw anything like it. 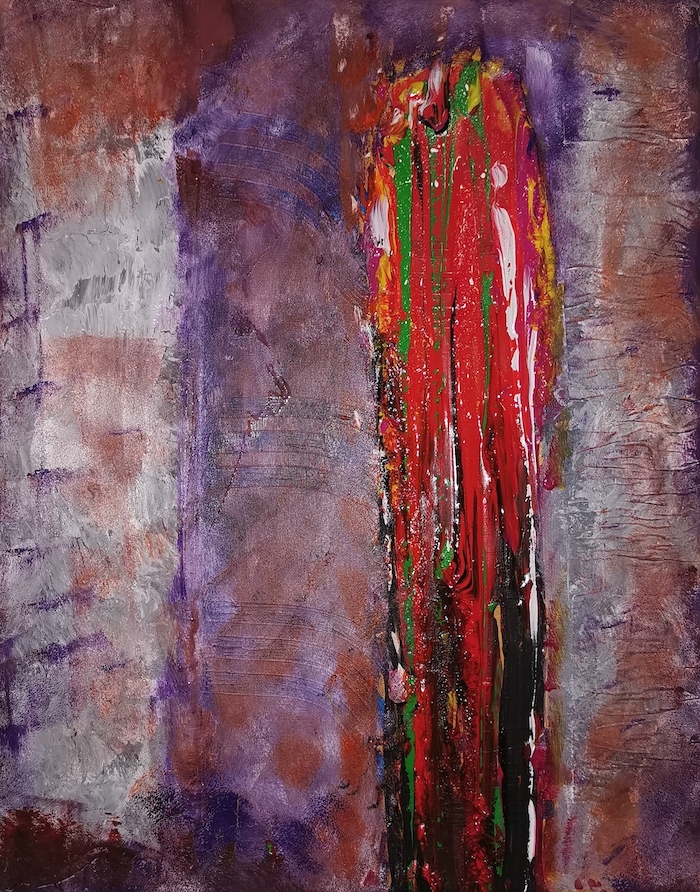 “The staff are fantastic, we all really pulled together, we were pulling in the same direction. We’ve all really been on the same page and it’s a great team. Only recently we’ve started to see the volume of parcels drop a little, but it is still quite high.

“A great thing also is that the public has been very appreciative. When they see the uniform they stop and say ‘Thank you for getting my parcel delivered to me’, and it’s lovely to see the appreciation from the people of Galway city and county.”

His colleagues have also reacted positively to Jeffrey’s paintings. “The staff have been really supportive of my art,” he says. “There’s been flyers up about it, I was featured in the An Post magazine. They’ve been really great.” 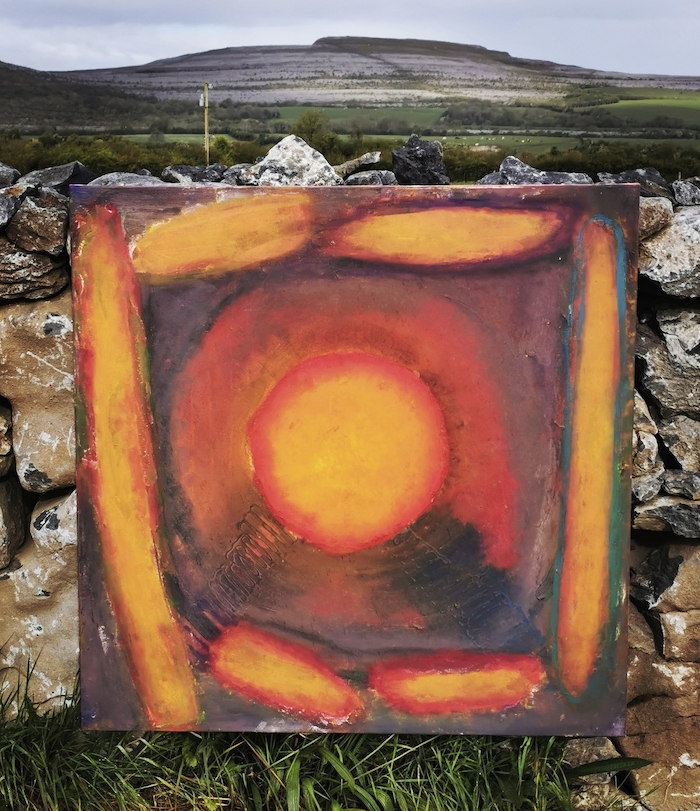 Jeffrey’s art is striking in its bold use of colour, and abstract forms which can take concrete shapes, or be free flowing, expressive, gestural layerings of paint. At times, a work can convey both forms, and the strange beauty of the Burren is also discernible in a number of works.

While Jeffrey does representational art (he has created a number of impressive, Warhol-esque works of David Bowie, John Lydon, Joe Strummer, etc ), his main focus is on Abstract Expressionism, a direction he was inspired to go in by his love of the British painter, John Hoyland. 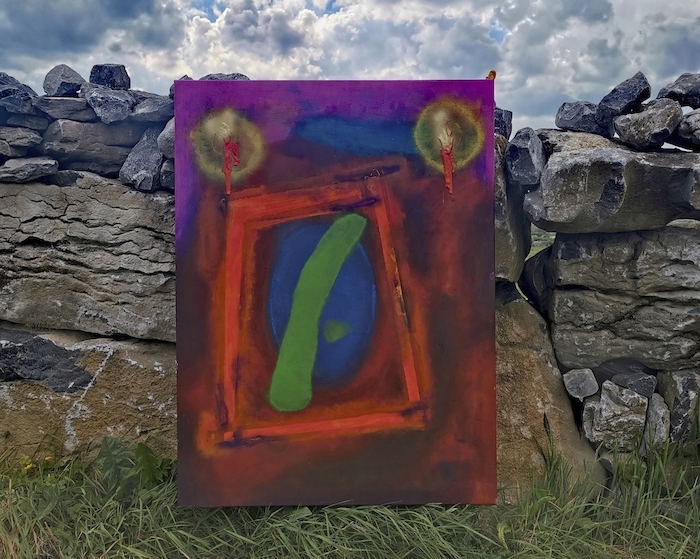 “I saw a very old BBC documentary, Seven Days with John Hoyland, when I was 13,” he says. “Watching his approach, how he went about painting, it was one of those moments when you know what you are going to do with your life.”

Jeffrey also loves the freedom Abstract Expressionism affords him. “I work on large canvases, and for me, the creative process is when you get a canvass, you don’t know where the painting will start and where it will finish until it is finished, you don’t know what’s going to happen until you stand back and say ‘It’s done’. I also think about my sister. She died last year, but even up to the end, there was never a day when she didn’t pick up a rush or a pen. Whenever I get stuck, I look at her picture and think, ‘What would you have done?’” 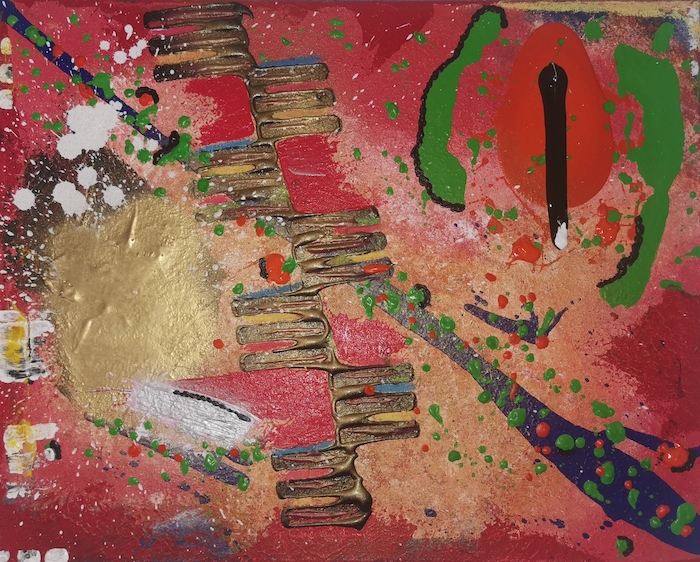 Jeffrey’s work was originally, predominantly in black and white, but after experimenting with colour, his work received great attention on Instagram, convincing him this was a path worth exploring. His use of colour also reflects something of his own outlook on life.

“I think because of the pandemic, and people being down, I want my art to be a positive thing, something a viewer can look at and think, ‘It’s not such a bad world after all.’ I’m very, very lucky to live in a wonderful part of the world, and be able to do what I do, so I want to give something back, and try to make a positive contribution in my own little way.”