It promises to be a revealing fixture for John Caulfield’s charges, who summoned a last gasp goal in Turners Cross to divide the spoils with Cork City last Friday.

Maurice Nugent’s header in the closing stages ensured United, who had Stephen Walsh controversially sent off in the first half, drew with City.

“We went out to get three points and the sending off we were really disappointed with,” Caulfield says. “We certainly felt there was nothing in it and it certainly wasn't a sending off. You are down to 10 men five minutes before half-time and it changed the whole scenario of the game.

“At half-time we spoke about keeping our shape, keeping it tight, trying to hit on the counter attack. In the second half we were very good.

“Cork had a lot of the ball, they had a lot of possession, but once they stepped into our half, to play the ball, we were intercepting it and doing really well on the counter attack.”

United’s energy and enthusiasm was rewarded when Nugent pounced following a burst of pressure. “Cork's only shot on goal in the second half was 10 minutes from time, it was a fantastic volley, they scored a goal from outside the box, but it was their only shot on goal which showed you how well we defended,” Caulfield adds.

“Also we had created a number of chances ourselves and were dangerous on a number of breakaways. It showed the character in the side, people are sick of me saying they are great lads with a great attitude and desire, who want to do well for the club.

“Sometimes the results mightn't have gone exactly the way we wanted them to, but I keep saying the amount of goals we are scoring late in matches shows the type of group we have. You are down in Cork, a goal down, 10 minutes to go, you're down to 10 men, it is very easy just to give up.

“You can take the option that we are down to 10 men, but the lads got up and in the last 10 minutes we had a right good cut off them to see if we could get the equaliser. I think we thoroughly deserved it.

“We worked the goal well, Gary Boylan did brilliantly to pull the ball back for Maurice Nugent to head the ball home from six yards. It was fantastic to get another late goal to get a draw from the game.” 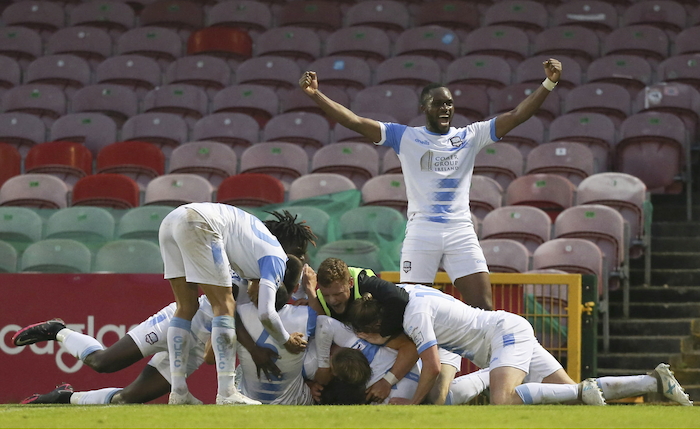 Caulfield acknowledges that a significant test awaits at the Drumcondra venue with Shelbourne, prompted by the creative JJ Lunney, currently setting the standard. “Shelbourne obviously came down from the Premier Division, there was a lot of talk, they invested very heavily and fair play to them,” he says.

“Shelbourne are on a good run, but at the same time when you look at ourselves I believe we have turned the corner. We had a number of injuries, but the attitude in the last number of weeks has been fantastic.

Conor O’Keeffe is expected to be available for United with Caulfield optimistic that United can deliver in this high stakes match.

“They are scoring goals, at the same time we see ourselves as a team that is well able to play,” Caulfield says.

“We know Shels are very physically strong so we have to be able to deal with that. We are working on areas where we can hopefully hurt them with. Again it will be a very exciting game.”