The name Veronica Curtin and camogie go hand in hand in Galway. From Gael Linn success at junior and senior level, player of All-Ireland junior and minor championship wins with Galway in 1994, she was on the 1996 winning All Ireland Galway team, aged 16. The two-times All-Star in 2006 and 2007, Curtin scored 1-5 to help Galway win the 2005 National League. 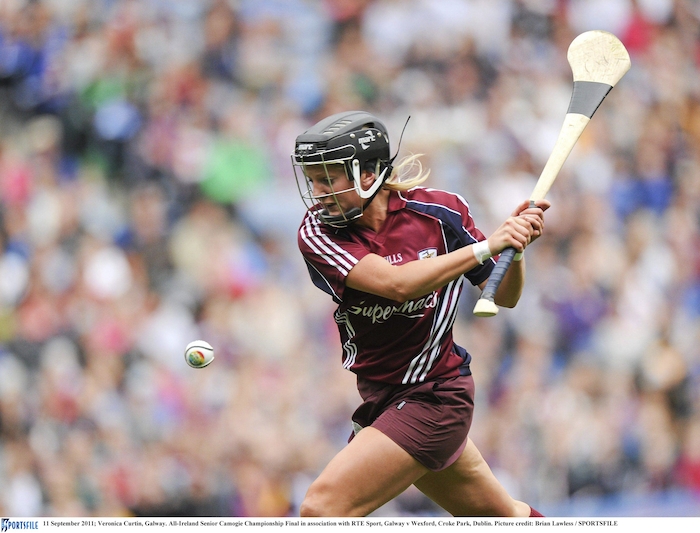 At what age did you start playing? As soon as I was able to hold a hurl I was playing at home with my other brothers and sister. My mother tells me that when I was two years old they would roll the ball along the ground to me and I would lift it up.

Do you remember your first game? I have many memories of my early playing years. My earliest memory is of the excitement of my first training session when I was seven years old. There was no club at the time in Kinvara for girls to play camogie and my mother, knowing how much I loved to play, decided to start a club. Our first session was inside the gate of the hurling field in Kinvara behind a huge hill that once stood there. I remember scoring three points in an U10 county final against Pearses which we won. I also have fond memories playing on the boys' hurling team in Doorus National School.

Ideal position and why? I’ve played in forwards all my life. Full forward has always been my favourite as I always felt central to the play in there. I got a taste of centre back one year with the club and felt very comfortable reading the play and driving forward with the ball as opposed to having to win the ball, turn and score.

Who inspired you when growing up/and now? Anybody who played the game of camogie and hurling. I loved watching people play and tried to copy the top players. I would play out the All-Ireland final every day on the lawn or use the gable end of our house to practice.

Did you also aspire to play at the top level? I never really gave it much thought as a child. I played because I loved the game so much. It was my only pasttime. The only toys I had, or wanted, were a hurl and sliotar. I remember my mum getting a phone call inviting me in to play with the Galway Juniors. I was only 14 years old at the time and I remember the excitement I felt at the prospect of playing at county level with girls from other clubs around the county.

What do you particularly like about your sport? The skills needed to play the game, the health and fitness benefits you gain from training and playing, the life skills you develop from participating, winning and losing, and the memories and friends you make along the way.

Greatest influence/role model? My mother did all she could to have me involved in playing camogie because she knew how much I adored it. She founded our club in Kinvara when I was seven and was my trainer at U10, 12 and 14 levels when we won county championships. She drove me around the county to training and games. I owe my successes to her. Also, my husband Damien has always being a huge support.

Biggest challenge? Dealing and coping with the All-Ireland defeats and some of the unprofessional, inadequate management set-ups we trained under and were part of.

Greatest success/achievement? 1994 was a highlight year for me as I was part of both the All-Ireland winning minor and junior teams. I received player of the match in both finals and this paved the way for me to play senior for Galway.

Favourite memory? My favourite memories of my early playing days are those spent in Mosney competing in the National Community Games finals. Later I have great memories of playing for UCG (now NUIG ). The happiest memories are those where there was lots of fun, enjoyment and friendships involved.

Biggest regret, if any? I suppose I feel I didn’t get enough out of myself on big All-Ireland days because of some force or another pulling against me. I have a regret that I allowed it affect my performances and regret I didn’t play more freely and express myself better.

Fiercest opponent/s? There are only a few top teams at intercounty senior level that can win the O’Duffy Cup each year. Cork set the standard for years when I was playing, but the Wexford team of 2010 and 2011 were phenomenal.

If you were not playing your sport, what sport would you want to play? I played hockey throughout my secondary school years with Seamount College Kinvara and later with Renmore Hockey Club when I finished camogie. I also play golf so I hope to continue this when time allows.

Are you still involved in the sport? As a primary school teacher in Portumna I look after and train our school's camogie team.

What do you do to relax? I love to walk or run in the forest park in Portumna. I also enjoy a good Netflix series and a good autobiography to read.

Best/worst aspect of lockdown: Being able to spend quality time with my children is a major plus. The worst is the feeling of restriction - not having the choice to be able to travel and not being able to visit family and friends.