There are not many who had Charlie McBride’s versatility, work ethic, and a willingness to take on a job given to him at the last minute, and be able to rise to the occasion every time.

In my near 20 years as Arts Editor of the Galway Advertiser, Charlie was my loyal lieutenant, my invaluable partner. He was a magnificent chronicaler, advocate, and supporter of the arts scene in Galway, particularly theatre, but also the visual arts, and in the many tributes which have been paid to him, all this has been, quite rightly, highlighted and praised.

I, though, would like to highlight another side of Charlie’s work. For a number of years we ran a dedicated interview page, Shooting The Breeze. When the Galway Advertiser management asked Charlie and I to look at broadening its scope beyond the arts, Charlie grabbed the opportunity with both hands. He spoke to local business people, teachers, wildlife conservationists, Claddagh boatmen - all walks to Galway life and people.

And, in the space of a few months in 2018, he interviewed the then Taoiseach Leo Varadkar, Sinn Féin president Mary Lou McDonald, and the then Labour leader, Brendan Howlin. In many respects, that trilogy of interviews was perhaps his finest hour - showing that Charlie was a journalist for whom there was nothing he could not write about.

In conclusion I would like to paraphrase what Richard Dawkins said following the all too soon death of Douglas Adams, and apply it to Charlie: “If ever a man left the world a better place for his existence, it was Charlie. It would have been nice if he’d given us the full 70 or 80 years, but by God we got our money’s worth from the 61” - Kernan Andrews, Galway Advertiser arts editor 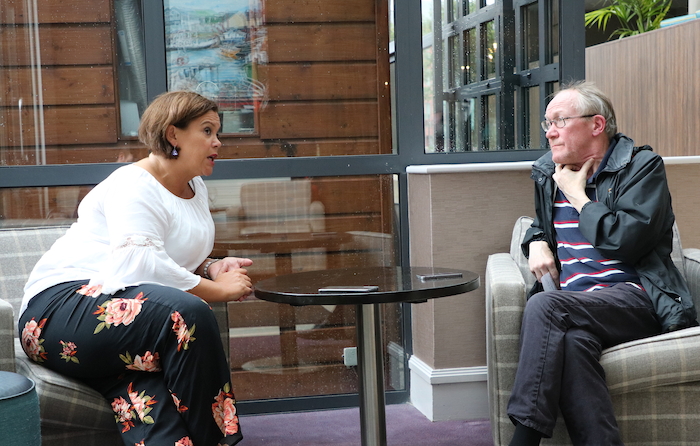 We will never forget his incisive humour and acerbic absurdity displayed so often, and so eloquently, during in his performing days as part of the deadpan double act with his friend and ally, the late Connor Maguire. In the 1990’s, Cúirt was never Cúirt without a late night out in the Atlanta Hotel on Dominick Street, listening to the two lads rant on about what we thought then was a complicated world. Can you imagine the craic they would have now – only God knows what the pair of them are up to now inside the pearly gates of the heavens above!

Always the consummate professional, meticulous in his research and constructive in his detailed critiques of scripts, productions and performances, Charlie was Charlie - an avid listener, a brilliant writer and a witty engager. He is – and will be - missed. Our thoughts and prayers are with Aileen and the girls and with Charlie's close colleagues and friends in the Galway Advertiser - Fergal McGrath, director, Town Hall Theatre 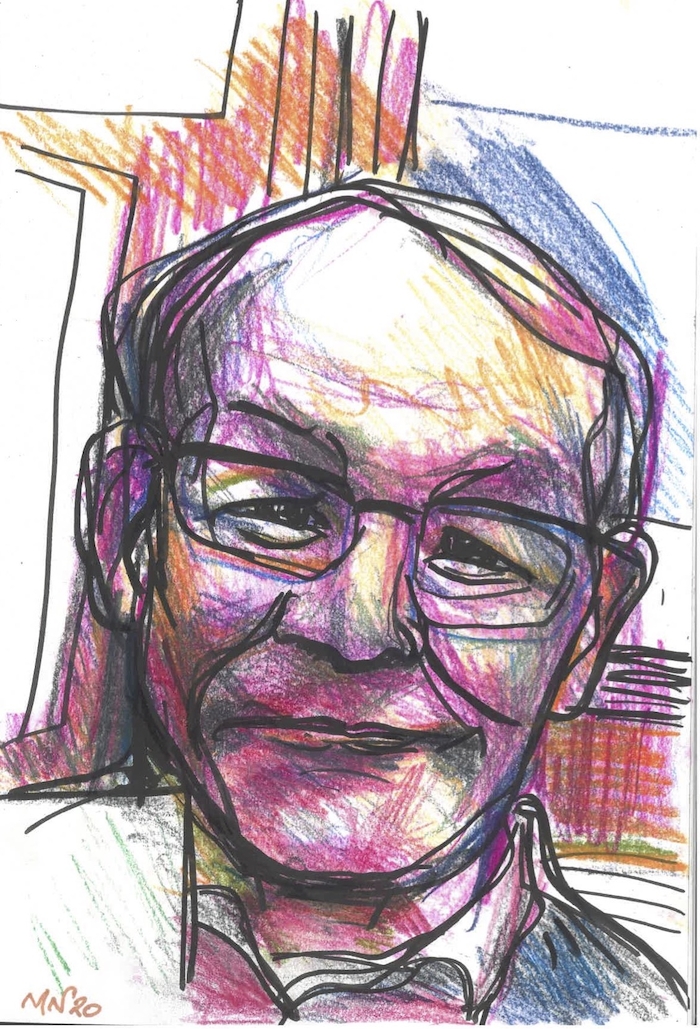 A portrait of Charlie McBride by Galway artist Margaret Nolan.

Charlie McBride was one of the first people I met in Galway who was engaged with the arts. He was a participant in a fledgling writers’ group we held in a pub for a time. Later, I remember his work in comedy with the late Conor Maguire. He was involved in the first Cúirt festivals.

Charlie was always amiable and possessing a dry, sharp wit. We would meet in the street or in a bookshop and share light gossip or a joke. It was always a pleasure to bump into him. An astute interviewer, he was possessed of that rare journalistic quality of being openly interested in his subject. Behind this lurked a depthless cultural acuity. He knew his stuff. He wrote accurately and concisely. One of the last times I met him was when he wrote a piece about a new collection of poems I had published.

Galway’s cultural world evolved rapidly over the years: Charlie chronicled the changes. He was a product of a vital arts scene with roots in NUI Galway of the day, which bore fruit in Druid Theatre, the Galway Arts Festival, Macnas, and so on. He will be sadly missed by the cultural life of the city - Fred Johnston, poet and author 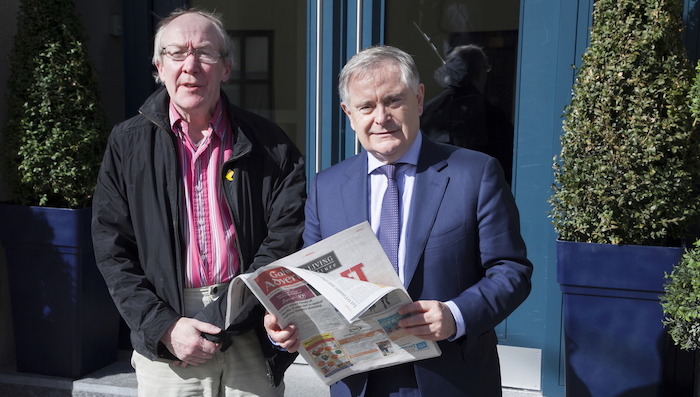 Charlie McBride with the then Labour leader Brendan Howlin.

Charlie was a central part of the Galway arts community. He was always there supporting everyone, often with a wry comment into the bargain. He worked with Druid as script editor over many years. He had a sharp eye for what was good, and even more specifically for what was not good, and I always valued his opinion. His journalism was intelligent and informed. His quiet presence, his sense of humour and his decency were the hallmarks of the man. I’m so sorry for his wife and his girls to have lost him way too early - Garry Hynes, artistic director, Druid 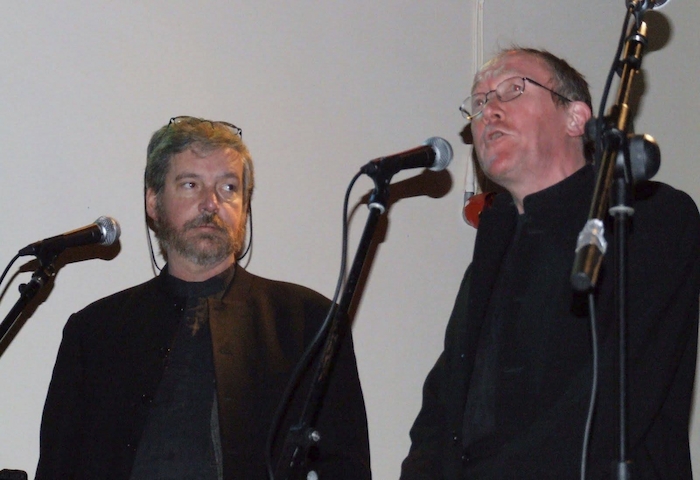 Charlie was a stalwart on the Galway arts scene for many years. I was shocked to hear of his death over the weekend although I knew he had a very tough year coping with illness. Charlie was a great writer and journalist whose thoughts and opinions appeared in this publication over a long number of years. My earlier memories of Charlie are from the mid to late 1980s, initially through his satirical writings and performances with his great friend Conor Maguire who sadly died a few years ago. Maguire and McBride kept us all hugely entertained, through their acerbic take and smart lens on social and political stories of the day, with their regular late night revues which really came to prominence at the Seventh Heaven restaurant on Druid Lane.

As a journalist, Charlie often interviewed me in his features on Galway International Arts Festival. He always had his homework done in advance, was hugely knowledgeable and informed, and especially passionate about theatre. His reviews were always thoughtful and considered and he was incredibly supportive of fledgling artists, writers, and companies and he offered great insight and critique. He had a great brain, was so very smart, with a great sense of humour. He always had a lovely gentle presence and will be hugely missed by the Galway arts community and beyond. My thoughts are with his wife Aileen and their daughters - Paul Fahy, artistic director, GIAF 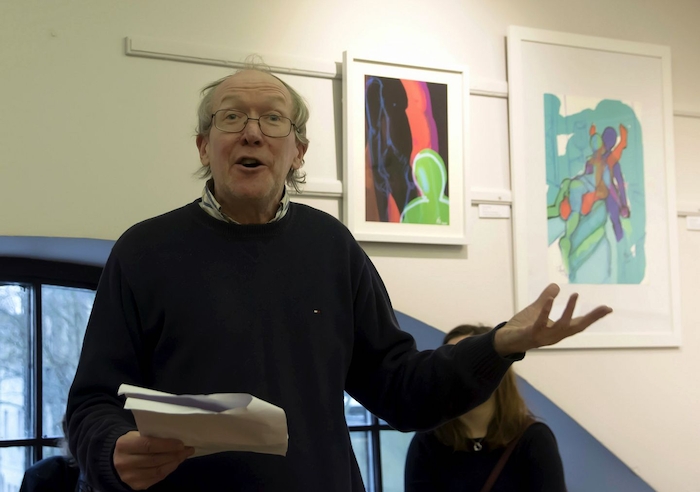 I first met Charlie as a recent graduate in 2002. He gave me my first interview in the house hotel. I was very shy and nervous but he treated me to coffee and put me at ease. An interested listener with no airs or graces, he always got what you were trying to express. He was incredibly supportive to many in the arts scene in Galway, writing thoughtful reviews and buying artwork, including my own, which I spotted in recent years when he was generously giving me toys for my daughter Emily, which were immediately put to good use.

At one of my first exhibitions in City Hall, curated by James Harold, Charlie caused some minor consternation by purchasing the best work before it opened to the public. Charlie was just trying to be philanthropic, but I think my family still bore him a grudge - although they were secretly pleased at the same time. He livened up many an art opening with his mischievous wit and banter. One of Galway's greats, he truly will be missed. Thinking of Aileen and his daughters at this difficult time - Jennifer Cunningham, artist 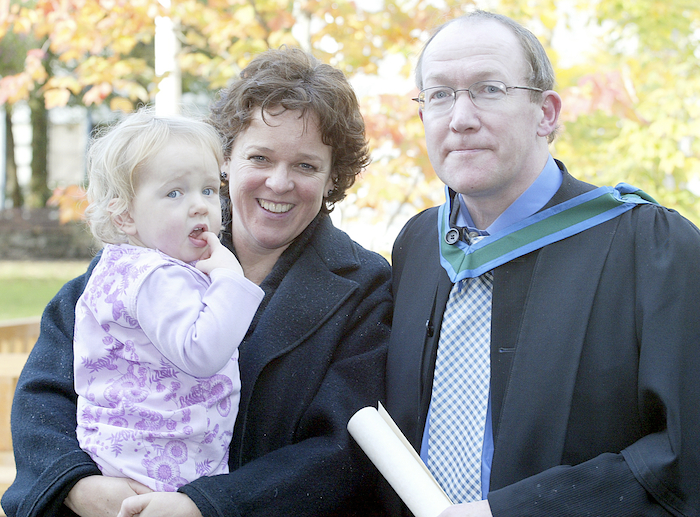 Charlie McBride photographed in 2004 with his daughter Lilly (then aged two ) and wife Aileen, at a conferring of degrees at NUI Galway. Photo:-Mike Shaughnessy

Galway and especially its arts community, was very lucky to have Charlie in their midst over the past decades. My first recollection of Charlie is when I shook with laughter at one of the comedies that he had devised with his friend Connor Maguire (also sadly gone from us all too early ) in Punchbag Theatre. I had just arrived to stay in Galway myself and as I sat there, it felt yet again that coming here had been the right decision.

Years later I knew Charlie as a very sensitive, prepared, intelligent interviewer who met many of the artists in the lineup for the Music for Galway midwinter festivals. He always put them at ease and invariably delivered pieces that were always perfectly researched and informative, and yet remained light and witty. The memory of his lovely Donegal lilt and chuckle will always make me smile - Anna Lardi Fogarty, executive director Music for Galway