HE WAS a hero and a villain. He was a gang leader who 'terrorised' neighborhoods, yet The New York Times wrote an obituary for him, and he was admired as a staunch supporter and friend of working class and poor Irish immigrants.

He was James 'The Rooster' Corcoran, and his turbulent, action-packed, controversial life, is the subject of a new album by the folk singer Vincent Cross, who himself is a descendant of Corcoran.

The Life and Times Of James ‘The Rooster’ Corcoran, featuring 10 songs charting the Irishman’s life, will be released on Friday August 7 via Rescue Dog Records. For Vincent, this is a story and a project, that is personal, both as family history and as an immigrant.

“I live in Jackson Heights, Queens, the most diverse district in the entire USA, and Corcoran is buried three stops away from me on the 7 train at Calvary cemetery,” Vincent tells me. “I see communities here come together for support as they struggle with a new country, with new demands, and look to a brighter future - all similarities that relate directly to Corcoran’s struggle. I cannot imagine what America will look like 170 years from now, but I feel his story is an important Irish-American immigrant story that hasn’t been told.”

‘The master of mayhem’

Born in Balbriggan, Dublin, in 1819, James J Corcoran came from a long line of fishermen. At the age of 25, in 1844, he set a course for America. He eventually settled in New York where he founded the The Rag Gang, “one of the most notorious of the many newly formed combinations along the Bowery”.

He came to be known as ‘King Corcoran’, so much so that he was referred to as such by The New York Times. She also developed something of a double reputation, and was known to be called both "the master of mayhem” and an "Irish gentleman”. He died in 1900 at the age of 81.

His wife, Kathleen Barnwell was also an infamous New York character. Reputed to be the only person who did not fear Corcoran, she also made the papers. A headline in The Sun for December 18, 1897, reads: 'Mrs. Corcoran Tells Her Story: May the Devil Admire Her if She Won't Sell Papers at the Bridge and She a Taxpayer.'

Vincent’s album tells these stories in song. Most are original compositions, with a few Irish folk standards included, such as ‘Creole Girl’ and ‘Off to California’, which relate to the immigrant experience.

Vincent admits that his family’s knowledge of their descent from Corcoran was not widespread, but some research by his sister would change all that.

'Corcoran’s competing narratives seem contradictory, he is portrayed both as hero and villain. That complexity has left him out of the historical records'

“My sister was the one that mentioned Corcoran back in 2015” says Vincent. “She sent his obit from The New York Times, and his Wikipedia page, and I found an inscription hidden under some construction work. Having started reading numerous tabloid articles about Corcoran - there are no books - and reading Gangs of New York, where his son Tommy gets a brief mention, the first song, ‘King Corcoran’ appeared. It was titled after one of the headings from the New York Times in 1899.”

‘The language needed to be right’

Vincent neither idealises, nor demonises Corcoran, but seeks throughout the album to give his life as fully rounded a portrait as possible.

“Corcoran’s competing narratives seem contradictory, as he is portrayed both as hero and villain,” says Vincent. “That complexity has left him out of the historical records and history books today. As you read about his day to day life in the tabloids they show Corcoran ‘terrorised’ neighborhoods, and New York Times articles refer to his violent nature and tacit leadership of the Rag Gang ‘maiming policemen for sport’.

'I wanted to create an historically based authentic Irish-Americana sound. I wanted no guitars as these would appear too modern for the period'

“Yet, on the other side is his support for the Irish immigrant class who were ‘ill-viewed in certain quarters’. He apparently had one of the largest funerals on the Lower East Side. It’s hard to reconcile a character like Corcoran with the American dream and the Irish-American experience today. There are parts of his story we would rather not discuss.

It was also important to Vincent to be as faithful to the language of 19th century American-English and the instrumentation used by Irish musicians of that period when creating the album.

“For this project I really looked into the language of broadside ballads. They used to be the earliest form of journalism, depicting in detail murders or tragic events. I wanted to write songs that sounded like they had been written by an anonymous ballad writer of the 1800s. I studied the forms of traditional ballads, and in particular Irish ballads as the language needed to be right, and setting these together with the newspaper language it started to take shape.

“I also wanted to create an historically based authentic Irish-Americana sound. I wanted no guitars as these would appear too modern for the period. I wanted drones for rubato and legato effects, and so learned the English concertina. I also had a mando-cello specially made, and I worked in as many crooked tunings as possible. I also needed to have a foot in Americana roots music, and developed the minstrel style banjo playing which also fits the time too.” 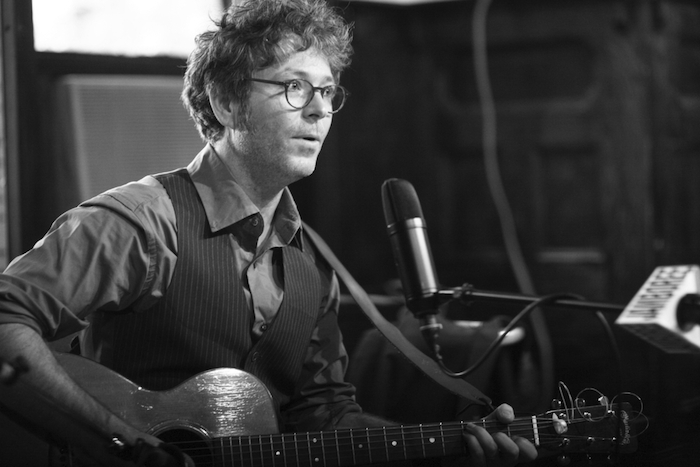 While resident in New York since 2006 (“A New Yorker they say, is someone who has survived in New York City for 10 years. I’m still here so that would make me a New Yorker.” ), he was born in Dublin, and lived in Australia and Athlone, before his family moved to Galway in 1989. Indeed, many Galwegians will remember Vincent from his immersion in the city’s folk-music scene.

“Galway back then seems like a century ago on many levels,” says Vincent. “I’d stand across from the Claddagh Cinema in awe of Terry Smith as he played ‘Hesitation Blues’ and the ‘Spanish Lady’. I remember film-maker Niall Hughes booking me to play my first gig at Monroe’s Tavern, and feeling elated by his support, and Mark Kennedy, who kindly gave me a book on Gandhi called Living From The Heart.

“I remember playing Taylor’s and joining Gan Anim for tunes, and wanting desperately to be able to play traditional Irish music, and also wanting to write songs and be free of the 9-5 world and to be a part of romanticized nomadic life. Galway had a magic to it then.”