A FAMILY in crisis is put into emergency accommodation, finding themselves in a run-down hotel in a seedy part of town. From one danger, they, and particularly their children, have stumbled into another.

This is no ordinary hotel. It is a very dangerous place, especially for the young. A wicked witch lives there, and she loves nothing better than to trap children within the hotel walls.

This is the setting for Irish National Opera, Theatre Lovett, and The Abbey Theatre’s daring reinterpretation of Englebert Humperdinck’s celebrated opera, Hansel and Gretel, which comes to the Town Hall Theatre on Tuesday March 3 at 8pm.

Directed by Muireann Ahern and Louis Lovett, with the music conducted by Richard Pierson, the roles of the children who are entrapped by the witch, and who must defeat her, are played by the acclaimed mezzo soprano, Raphaela Mangan (Hansel ) and rising star of Irish opera, Amy Ní Fhearraigh (Gretel ).

'I sort of fell into it' 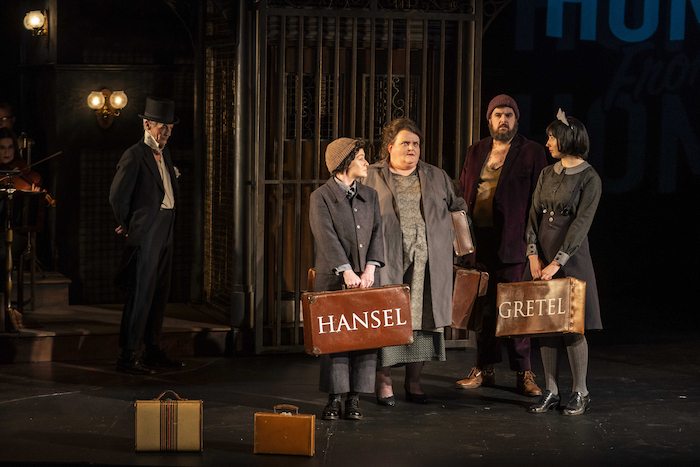 Since making her debut in 2017, in Opera Collective Ireland’s Irish premiere of Britten’s Owen Wingrave, Amy has become a name to watch in Irish opera, with GoldenPlec making her one its Plec Picks of 2018. Since then, she has appeared in Irish National Opera production of Mozart’s The Marriage of Figaro, as well as in Lyric Opera Productions’s staging of Bizet’s Carmen, and numerous DIT Opera Ensemble productions. She also made her RTÉ National Symphony Orchestra debut in a live broadcast on Lorcan Murray’s Classic Drive on RTÉ Lyric FM.

'Even though the foundations of the story are bleak, on top of that is sprinkled vibrancy and delight'

However her route to opera was anything but traditional or straightforward. “People usually start singing or learning a musical instrument when very young, but I started much later then people usually do – I was 21, I sort of fell into it,” she tells me during our Monday afternoon interview. She had been turned onto opera a couple of years before, after hearing Pavarotti and Mirella Freni’s 1973 recording of Puccini’s La Boheme. “I was blown away, it opened up my mind to opera as an art form,” she says, “but I was very much a shower singer. I saw opera as unobtainable, otherworldly.” 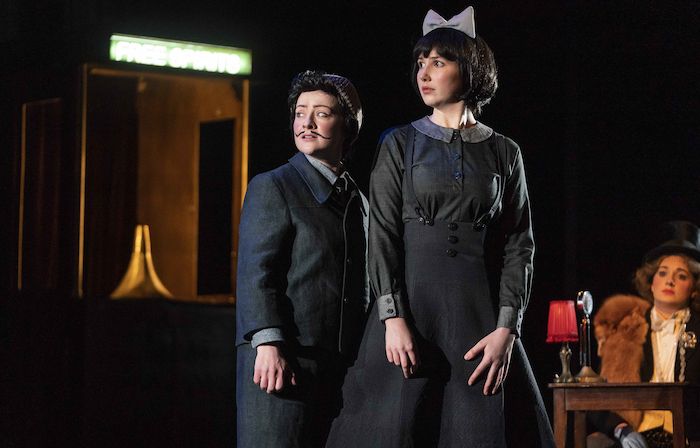 Yet, a chance meeting would change all that. “I met this girl at a party. I got talking to her and told her how much I loved opera,” Amy recalls. “She took my word that I could sing. She said her godmother was a soprano and she organised for me to sing for her. The soprano listened to me and said I had what it takes.”

Engouraged, Amy enrolled in the DIT Conservatory of Music and Drama, from which she graduated with first class honours. “It was a daunting few years, but I was fine,” she says. “I never thought I’d have what it takes to do it professionally.”

Sprinkled with vibrancy and delight 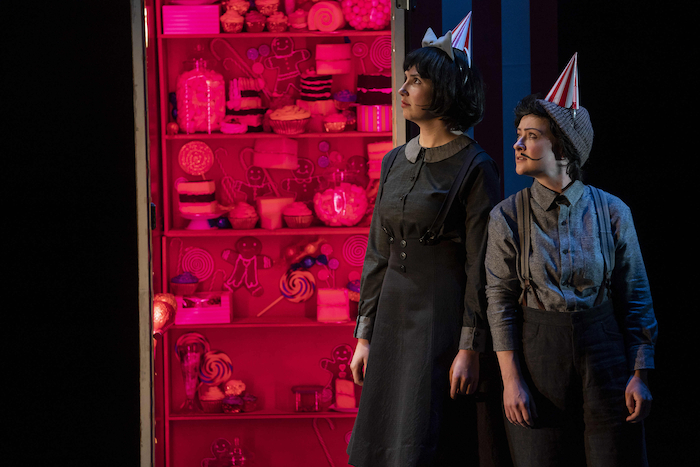 Humperdinck’s opera, first performed in 1893, began life when he put music to songs his sister had written for her children, based around the Hansel and Gretel fairytale, as recorded by the Brothers Grimm.

The story’s mixture of fantasy, magic, and adventure, alongside the dark themes underlying it (parental neglect, abandonment, child abuse ) is the perfect setting for the Theatre Lovett’s imagination to work, and as Amy points out, the production balances the child-like and the fun with the sinister.

'When playing a child, there has to be an element of naïvety. Gretel is much more gullible and susceptible to the witch’s offers of cupcakes than Hansel is'

“It’s not set in a certain era or place, but Theatre Lovett have very succinctly put in social nods,” she says, “as the family of Hansel and Gretel have no money and are put into emergency accommodation, a situation many families face in Ireland, so it does touch on a contemporary situation, but the show is never consumed by it."

This is because the show is aimed, not only at adults, but children aged 9+. “There is an element of the fantastical fairytale energy,” says Amy, “It has the serious themes and the rich, complex, aspects to the music that will appeal to adults, but there are lots of deliberately silly aspects as well, and we use colour and neon lighting, and slapstick comedy, that will appeal to children. So even though the foundations are bleak, on top of that is sprinkled vibrancy and delight.” 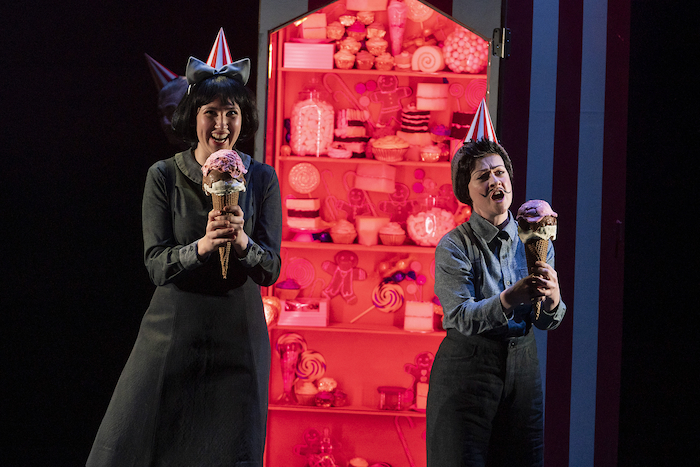 That child-like sensibility and energy also animate Amy’s performance as Gretel. “One of the notes we were given by Muireann and Louis was not to act like children. When adults pretend to be children it can come across as forced, so what I did was to channel my inner excitement. As Gretel, I’m springy and fizzy and bubbly, like a child on Christmas Eve, or waiting to go on holiday. I wanted to bring out that child-like excitement of ‘I just can’t wait...’.

'The hotel is a honey trap for children to be ensnared in by the witch, and their spirits get lost in the hotel walls'

“Also, when playing a child, there has to be an element of naïvety. Normally in this opera, Gretel is sensible and Hansel is always tripping up. Here, it’s the other way around. She’s much more gullible and susceptible to the witch’s offers of cupcakes and lollipops than Hansel is. It’s also a very physical role, I’m jumping around a lot, which fits in with the music, a lot of which is in 6/8 time, which is a dance signature. That fits in with Gretel being very excited and bubbly. The whole thing has been a lot of fun.”

A touch of The Shining?

The stage sets, featuring the seedy hotel, a display case full of tempting sweets and cakes, and even a mobile kitchen for the witch, is the work of set and costume designer, Jamie Vartan.

“Jamie’s set and costumes are fabulous, he’s a visionary,” declares Amy. “The setting is a run down hotel on its last legs. There is a broken balcony, and old brass elevator, and the hotel is a honey trap for children to be ensnared in by the witch, and their spirits get lost in the hotel walls.” 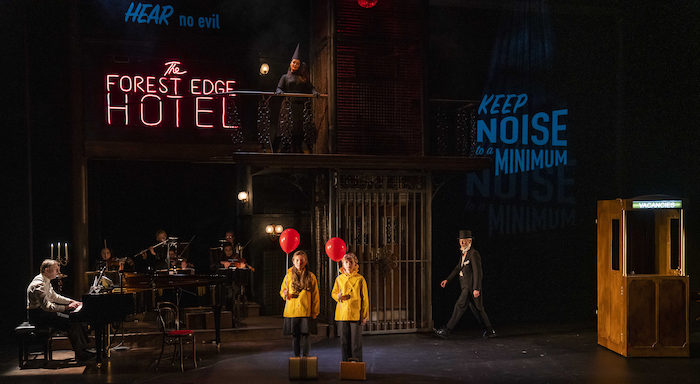 Sounds a bit like Handsel and Gretel meets The Shining? “There are those elements in there, it’s not too far off The Shining,” Amy says. “There are other Stephen King references in there there with the red balloons and yellow raincoats from It. It begins with this familiar feel, which is comfortable, then become distorted throughout, to make the audience uncomfortable, and make them ask, ‘What is going on?”

It is a question that will be answered when audiences witness just how this classic opera has been imaginatively reinterpreted. Certainly not a show to miss.

Tickets are available from the Town Hall Theatre (091 – 569777, www.tht.ie ). The production will be sung in English with English surtitles.