THIS WEEK saw the release of the much anticipated The Irishman in Irish cinemas. We are lucky here in Ireland, due to Netflix's role in financing the film that is has not been released in American cinema chains.

The movie is highly anticipated and tipped to win many Oscars, but despite the talent involved there were a few pretty big red flags for me, and, while I was not dreading it, I did not have the excitement I would usually have for a new Scorsese film.

Number one was length, the film is three and a half hours. I firmly stand by the rule that every film would be improved by cutting 30 minutes. The second red flag was the production, the film cost $170 million. The reason the cost was so high was the introduction of a new de-aging technology. Here we have a 76-year-old Robert De Niro playing the same character from his twenties to his eighties - and not just De Niro, but Al Pacino and Joe Pesci as well. The reason Scorsese went to Netflix (it will be released on Netflix at the end of the month ) for financing was that no studio would rubber stamp that budget.

'Pacino, De Niro, and Pesci are all sensational form, the best any of them has done in years'

I would have had no issue with a young actor playing a young De Niro, De Niro himself won an Oscar for playing a young Marlon Brando in The Godfather II. It took me all of two minutes to dismiss that red flag and just be happy to be back in the company of a true master. This is my favourite film of the year so far and it is such a triumph for Scorsese - a man who has produced at least one masterpiece every decade for the last 50 years. Incredible. 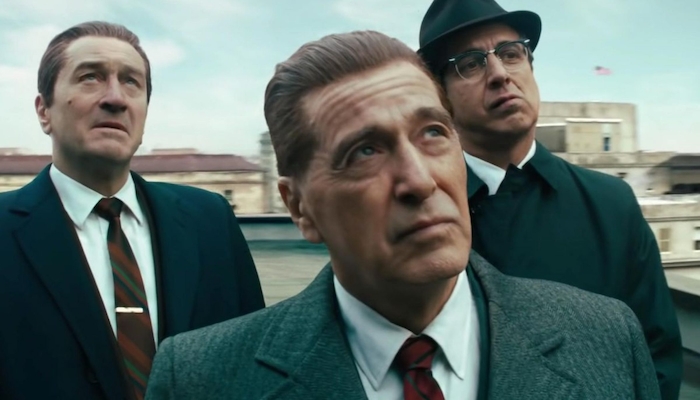 The story - a young gangster moves up in the world of organised crime - is not a massively groundbreaking plot but the script, penned by Steve Zaillian, and the acting, means the time flies. Pacino, De Niro, and Pesci are all sensational form, the best any of them has done in years. The first hour is kind of Scorese auto pilot but over time the film slips into something else, moving from a gangster film into an extremely mediative introspection by Scorsese.

The final hour is fascinating and feels so personal. You almost feel like this is an apology for aspects of Goodfellas and Casino, with Scorsese saying, 'God if I knew then what I know now I would have ended those films differently.'

At the end of Goodfellas, Henry Hill laments being stuck in the suburbs in witness protection, he has sold out his friends and his gangster days are over. The hardest part, Henry says, is that there is no action. For Frank Sheeran, the titular Irishman, there is no such luck. Watching his life fall apart, and dealing with the consequences of his actions later in life, adds a tremendous amount to a film like this. It is a great standalone film, but as a closing chapter in Scorsese's catalogue it carries incredible weight.