On St Patrick’s Day this year, two US army veterans, Ken Mayers and Tarak Kauff, aged 82 and 77 respectively, were arrested at Shannon Airport for protesting its continued use by the American military.

Charged with damaging the airport’s security fence and trespassing, they were held in Limerick prison for 12 days and had their passports impounded. Still awaiting their case to come to trial, Ken and Tarak have been using their extended Irish stay to take part in other anti-war protests against American militarism and to champion Irish neutrality.

The two men, both former soldiers in the US army, and now members of Veterans for Peace, have commenced a ‘Walk for Freedom’ which started in Limerick last Saturday and will end in Malin Head, Donegal, on September 27. Before their epic trek commenced I met Ken and Tarak in Limerick and they related how they went from being soldiers to peaceniks and why they believe Ireland can be a strong voice against war in the world. “My father was in the marine corps in World War II and the Korean War, so I grew up drinking ‘marine corps Kool Aid’,” Ken begins. “The corps actually paid my way through college and when I finished I took a commission in it. At that time I was a true believer and thought America was a force for good. I served on active duty for eight and a half years, in the Far East, the Caribbean, and Vietnam, and I increasingly saw that America was not a force for good.”

Ken lists some of the things which eroded his faith in US virtue. “The first clue was in the spring of 1960 when we were doing exercises in Taiwan - this was before it had become a tiger economy and it was terribly poor. We’d be eating our C-Rations and there’d be kids begging for the empty cans to patch their roofs with. That made me wonder why an ally of ours was in such poverty when we could have been helping them.

'I looked at what America was doing in Vietnam and it appalled me. That was the start of my activism and radicalism. When people thanked me for my service to my country I told them my real service didn’t begin until I got out of the military'

"A year later we were in Vieques Island, Puerto Rico, which the corps owned half of and used for gunnery practice. We were ordered to set up a live fire line across the island and if someone tried to pass we were to shoot them – and the islanders were American citizens. I learned later that the US was training Cubans on the island for the Bay of Pigs invasion. That incident was another.

"The final straw was when I got back to Asia in 1964. I was tasking destroyer and submarine missions along the Vietnam coast when the Tonkin Gulf incident occurred. It was clear to me that was a fraud being used to justify a major war to the American people. We were violating Vietnamese waters constantly, sending boats close to shore to provoke a reaction. That’s when I decided I could no longer continue to be an instrument of this kind of foreign policy and in 1966 I resigned.” 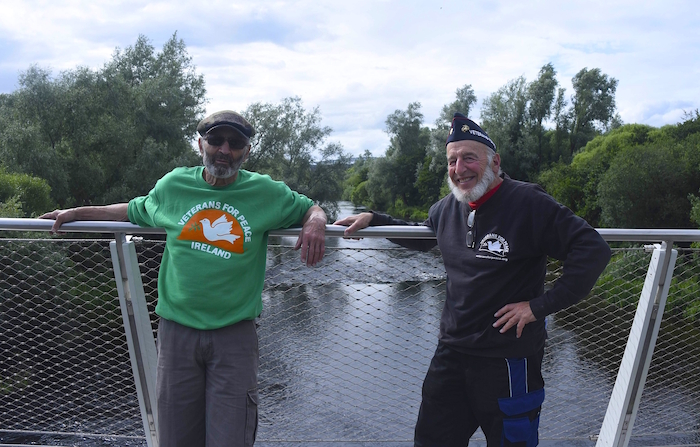 Tarak did three years in the 105th Airborne Division, from 1959 to 1962, and readily admits to feeling grateful that he got out not long before his unit was sent to Vietnam. Immersed in the febrile currents of the 1960s he became a staunch peace activist. “I was part of that sixties culture and it was a big part of me,” he declares. “I looked at what America was doing in Vietnam and it appalled me and that was the start of my activism and radicalism. When people thanked me for my service to my country I told them my real service didn’t begin until I got out of the military.”

During the interview Ken speaks calmly while Tarak is apt to be more fervent, jabbing the table top with his finger for emphasis - though he also smiles in self-awareness and jokes about how the contrast makes the two of them a good double act. They are both long-time members of Veterans for Peace, which was founded in Maine in 1985 and now has chapters in every US state and several other countries, including Ireland. It was Ed Horgan, founder of Veterans for Peace Ireland, who alerted Ken and Tarak about Shannon. “We met Ed a few years ago and we had thought Ireland was a neutral country but he told us about all the US military flights, and rendition flights, coming through Shannon. By facilitating those, Ireland is making itself complicit in America’s wars.”

Tarak highlights the terrible damage of American militarism, which includes climate destruction. “Today, America is waging wars in 14 countries while within the country there are mass shootings every day. The violence we export is coming home," he says. "More Vietnam vets have taken their own lives than were killed in the entire war. And young kids coming back from the wars in Iraq and Afghanistan are taking their lives as well. Why is that happening? That’s blow-back, that’s guilt!

"And today we’re not just killing people and destroying countries like we did in Vietnam and Iraq, we are destroying the very environment. The US military is the biggest destructor of the environment on earth; they are the biggest user of petroleum, they are huge toxic polluters with over a thousand bases around the world. People don’t often connect the military with climate destruction but it is intimately linked.” Ken and Tarak have previously been arrested in protests as far apart as Palestine, Okinawa, and Standing Rock in the US. “When you do these protests and oppose government policy they don’t like that and you do tend to get arrested,” Tarak notes wryly.

“But this is the longest we have been held in one place due to our passports being taken six months ago,” Ken adds. “We’ve been outside the Dáil with banners advocating Irish neutrality and opposing US wars, speaking at gatherings, been interviewed on radio and television, and we thought maybe we should get out on the road and walk and talk and meet people, put boots on the ground for peace. We’re excited about it and will be walking in different parts of Ireland until the 27th of this month. We’ll also be speaking at the World Beyond War conference in Limerick on October 5/6 which you can read about at www.worldbeyondwar.org ”

'This isn’t some guy walking around with a placard saying ‘the end is nigh’ these are our best scientists saying we don’t have much time. Your children won’t have a world to grow up in, this is what young people are trying to do with Extinction Rebellion, etc, and Ireland can play a powerful role in this'

The two men have a court hearing later this month when they will request to have their case moved to Dublin, though it could still be another two years before their trial proper is heard. Their passports were impounded because they were deemed to be a flight risk, a decision which denies them their civil rights and which Ken believes was politically motivated.

“It’s illogical to think we wouldn’t come back from America for our trial if we had our passports and could go home," he says. "A trial is part of the action; it is what we do to expose the issues and what’s going on. We realise the enormous potential for good that can come about if the Irish people – over 80 per cent of whom support neutrality - demanded it and forced their government to ensure it is properly applied. That would send a message to the whole world.” Both Ken and Tarak are grandfathers and most men their age would be passing their days in more sedate ways than globe-trotting protests, arrests, and court cases. What do their children and grandchildren make of their activism? “That’s why we do it, because we want these kids to have a world to live in,” Tarak asserts passionately. “People have to understand the very existence of life on earth is being threatened. This isn’t some guy walking around with a placard saying ‘the end is nigh’ these are our best scientists saying we don’t have much time.

"Your children won’t have a world to grow up in, this is what young people are trying to do with Extinction Rebellion, etc, and Ireland can play a powerful role in this. Since being here, I have come to love this country and its people. I don’t think you all realise how respected Ireland is internationally and the impact it can have around the world, especially if it takes a strong stance as a neutral country and plays that role. Doing the right thing for life on the planet means something, and the Irish can do that and that’s what I want to see happen and that’s why we go around talking to people.”

Ken and Tarak’s walk is expected to arrive at the Galway Crystal Factory at 12.30pm on Monday September 16. Those wishing to join them for part of the walk or offer support can find details at Galway Alliance Against War’s Facebook page: https://www.facebook.com/groups/312442090965.