Three years ago a new children’s book, Wanted - The Adventures of Jack & Adam, was published. This was followed in 2017 by second and third instalments of the series, The Widow and The Blaze, in 2018 by The Old Town, and more recently with Mischa’s Secret.

The author, Anthony Broderick, is a national school teacher and hails from Claremorris, County Mayo. The blurb for Wanted - The Adventures of Jack & Adam welcomes the reader to the “beginning of a series of intriguing stories following the adventures of two young brothers (Adam and Jack ) and their pets Club and Diamond, along with their family and friends.”

Broderick has plans for another 15 volumes in the series, and the enthusiasm he brings to these books gives them an energy that is almost contagious, and, much as in other well known children’s series, the books gather a momentum that is almost infectious. In the first volume, the boys are in fourth class. Adam, the elder, had stayed back a year and while good in some subjects needed to get continuous help from resource teachers. On the other hand, Jack learned easily, was more popular, and often a thorn in the side of his teachers. He was once described in a report as being “sometimes the best and the worst pupil to have in the classroom”. Yet they could never fault him in terms of his academic ability. 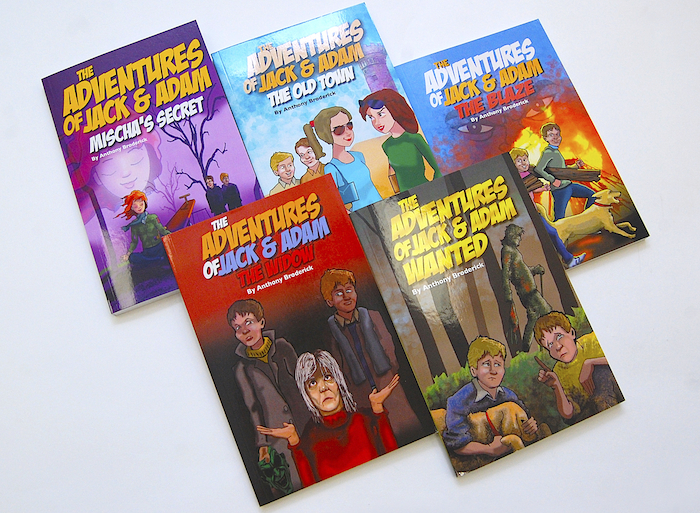 Along with their pets Club the dog, Diamond the cat; their kind, sometimes strict but loving parents; doting granny; and childminder, Jasmine, the boys embark on a series of adventures somewhat in the Enid Blyton Famous Five tradition.

As the books progress, the teacher in Broderick becomes more evident and give the books a different impetus which adds to their value. The Widow is set during Halloween. The boys are looking forward to enjoying the festival in the normal way but “things take a twist before and during the night that leave the boys in a state of trauma” While this is quite scary, the boys “unearth a new found respect for someone who has always been central to them”.

In The Old Town, while on holiday the boys are given some freedom to explore their exotic surroundings. They soon learn that with this newfound freedom comes responsibility and that friendly faces can have hidden agenda. The most successful is Mischa's Secret, which deals with bullying with a sensitivity that only a concerned teacher could show. As the blurb reads: “With Christmas right around the corner Jack should be in his usual high spirits, so why isn't he? A boy at school has been annoying him and Jack is struggling to keep it together. In an attempt to calm Jack down, Adam takes him for a walk to the old playground. There they discover a mysterious girl with a special secret".

Mischa's Secret brings the series to a new level and is definitely worth reading.