Macnas will be bringing their magic to the Galway St Patrick’s Day Parade on Sunday 17th March. Macnas Artistic Director is delighted to showcase next generation Macnas. The Macnas drumming troupe aged 15 -19 which will be led, under the stewardship of Éimhín Cradock and Debbie Wright, will perform a celebration of the dance between shadow and light to the city streets.

They will be joined by the Macnas Young Ensemble, led by Miquel Barcelo, who will bring a performance inspired by the animal energy in flight and fight with the human spirit. This troupe will pioneer new beats on the street with the Macnas signature high octane performance.

Costume will be designed by Cherie White, makeup by Michelle Ruane.

Passionate about nurturing the next generation of Spectacle artist in Galway city and county, the Macnas Young Ensemble has 45 members and the workshops are free of charge and run throughout the entire year on a weekly basis making the support of The Connacht Hospitality Group invaluable to the next generation. The partnership which began in 2018 will allow Macnas to develop a world-class dynamic performance ensemble and Drumming troupe for Galway city and county. This support also has helped to deliver Young Ensemble and Drumming events locally, nationally and internationally and support Macnas to engage with communities enabling young people to access free high quality large-scale cultural performances and activities. 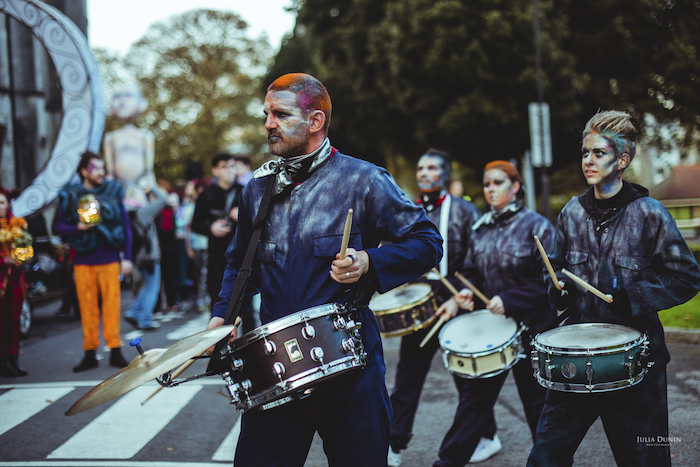 Founded in 2009, The Macnas Young Ensemble are a core part of Macnas and have presented their own stand-alone productions supported by Macnas. Under the tutelage of Macnas Performance Director, Miquel Barcelo and other visiting facilitators, the group develop new work that is relevant to them and which feeds into the present and future of Macnas. The Young Ensemble is open to anyone aged 15-19, the workshops take students through a range of performance styles including Commedia Dell’Arte, mask work, ensemble performance and physical expression.

Macnas are known across the globe for their large scale interactive, immersive spectacle events for audiences, communities and festivals, with their shows involving up to 300 participants with audiences of 50,000 people in attendance.

The parade kicks off at 11.30am. See www.macnas.com for more.