When word filtered through that Cavan had drawn with Kerry at half time in this encounter, the permutations and combinations of results that would be needed for Mayo to stay up in division one if they couldn’t come home from Omagh with win under their belts were being worked out by the supporters. But come full time in this one Mayo had put their destiny back in their own hands, thanks to Kevin McLoughlin’s brilliant winning score.

Any sort of positive result against Donegal next Sunday and Mayo will be safe in the top flight for another year no matter what happens elsewhere. This was one hard hitting encounter, with three black cards being dished out and numerous other hard hits fair and not so fair being given out. 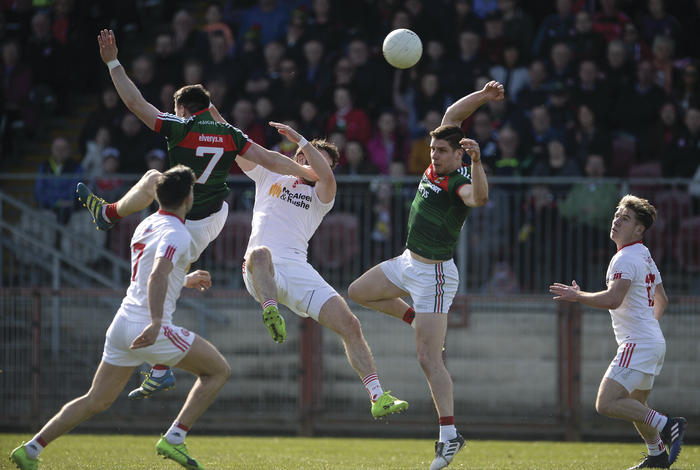 Up in the air: Paddy Durcan contests for the ball in the air. Photo: Sportsfile

There were only eight points registered in the second half, four from each side but it was an absorbing, enthralling and frustrating encounter. With Mayo forcing Tyrone to shoot from distance putting numerous efforts wide and dropping three into David Clarke’s area, which the Ballina man dealt with ease.

The opening exchanges in the first half saw both sides go score for score over the opening 19 minutes, with Paddy Durcan, Shane Nally, Kevin McLoughlin and Cillian O’Connor all finding their range for Mayo with Darren McCurry, Mark Bradley, Niall Sludden and Kieran McGeary all hitting points for Mickey Harte’s men.

Tyrone saw Sludden go to the stand for an early shower on 15 minutes for a black card after he fouled Lee Keegan and seven minutes later the Westport man also joined him there after he fouled Ronan McNabb. The vital score in the game came seven minutes from the interval when Tom Parsons finished off a brilliant move involving Fergal Boland, Cillian O’Connor and Andy Moran - driving the ball to the back of the net past Naill Moragn to put Mayo into a 1-4 to 0-6 lead, after Tyrone had edged two points clear thanks to points from McCurry and Sean Cavanagh. 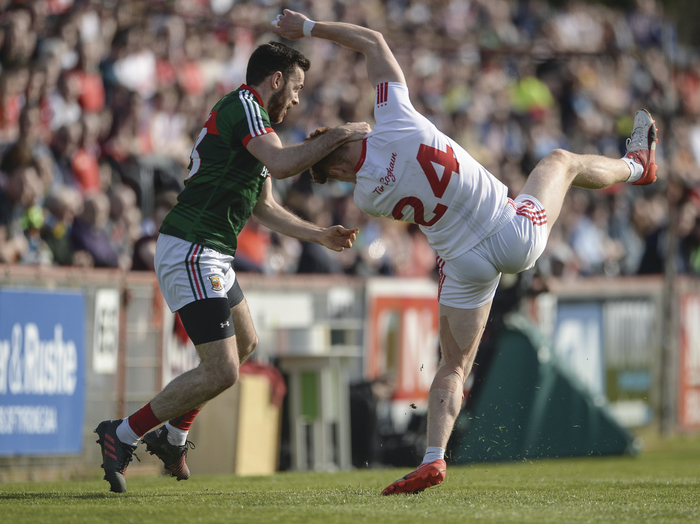 Mayo tagged on two more points before the turn around with O’Connor and Durcan raising the white flag, with Tyrone also kicking two more majors before the interval from the boots of Cavanagh and Bradley.

Nine minutes had gone by in the second half before the first score arrived through Kieran McGeary, Cillian O’Connor responded from a 45’ to keep Mayo’s noses in front. With 20 minutes to go Danny Kirby was shown Mayo’s second black card and Niall Morgan stroked over the resulting free to leave the score level at 1-7 to 0-10. Tiernan McCann edged his team back in front shortly after, but two pointed frees from O’Connor left Mayo leading by one again with 15 minutes to go.

Tyrone had it all square for the final time 13 minutes from the end thanks to a Bradley point, as the game reached it’s boiling point. Mayo introduced both Aidan O’Shea and Diarmuid O’Connor from the bench in the last quarter as they went looking for victory and 90 seconds into injury time they hit the winning score. McLoughlin broke at pace out from his full forward position and turned and fired over a great strike to send the Mayo crowed who made the long trip to Omagh home happy and looking forward to next weekends meeting with Donegal.