There was more than an air of hope around the county last week that Mayo could go to Croke Park and drive a knife into the heart of Dublin's 32 game unbeaten run in their own back yard. But from within minutes of the ball being thrown in, those hopes were proved to be idle pleasures of an early spring day dream.

Mayo boasted ten of the side that started last year's All Ireland final replay, with David Clarke, Stephen Coen, Jason Gibbons, Evan Regan and Fergal Boland coming the faces who didn't start that game, but apart from Boland the four others are well established senior players for Mayo. Dublin started only seven of their starters from last October's showdown, yet they showed a fluidity and hunger for work that was sorely lacking from Mayo in this game.

Mayo have had mini-disasters in league games before and gone on to do great things in the championship – so it would be foolish to write their epitaph just yet. But it was startling how far off the pace they were in this one. No forward scored from play over the entire contest, Mayo's two solitary scores in the first half came from 45's from Cillian O'Connor, with the only other attacker to raise a white flag – Evan Regan who kicked two handy second half frees from close range. 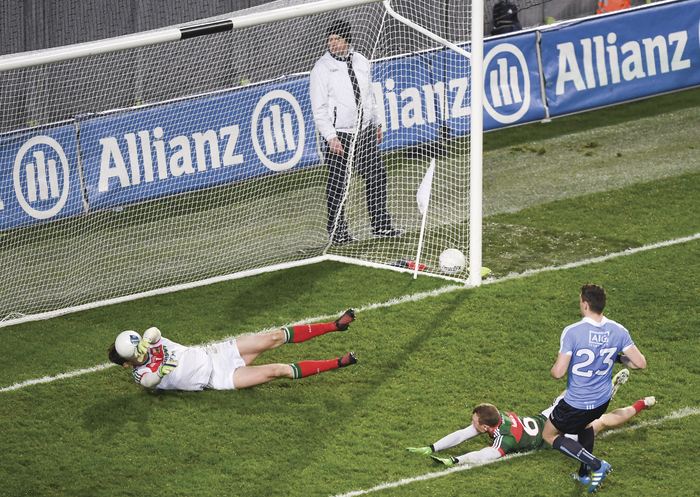 Mayo did have scoring chances in this game, in the first half alone they created 12, with seven going wide, three dropping short of the target and neither of the goal chances they created were finished off, with Stephen Cluxton saving from Cillian O'Connor who had done really well to create a chance, but he was shooting from a narrow angle and the Parnells man, made it even tighter by the time the ball left his boot. The second from Kevin McLoughlin drew another save from Cluxton, but it wasn't hit with the required power to beat a goalkeeper of his class.

At the other end of the field, Dean Rock put on a masterclass off free taking landing six from placed balls to go with the two hit hit from play. While Rock's slow progress in taking on some of those efforts in the second half particularly ired the Mayo supporters, he was excellent on a the wet and skiddy turf on Jones Road.

With seven minutes gone Dublin were 1-2 to 0-0 up, with Conor McHugh palming to the net after Niall Scully had got in the way off an off target kick-out from David Clarke, feeding Ciaran Kilkenny who drew the defender before putting it on a plate for the Na Fianna man.

Dublin targeted the Mayo kick-out forcing Clarke into taking a few risker choices, he much rather wouldn't have liked to. But the big Ballina net-minder, showed his shot stopping abilities were still at the top of the game with some excellent saves – no more so, than his triple block of Paddy Andrews penatly effort 46 minutes in. 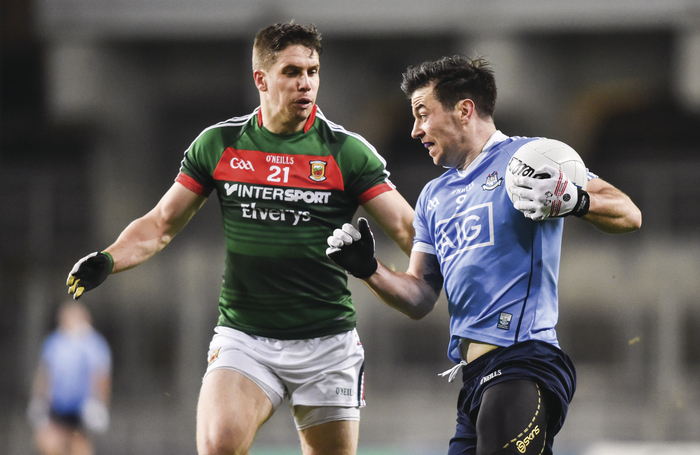 Dublin led by 1-5 to 0-2 at the turn around, with Rock kicking two frees, Philly McMahon, Eric Lowndes and McHugh kicking the points. Mayo did lose Evan Regan for a spell in the half when he had to get treatment for a blood injury after being caught by a nasty blow McMahon, which could have seen a red card shown if it was spotted by the referee.

Mayo went point for point with Dublin in the opening exchanges of the second half, but they failed to take advantage of any momentum gained after Clarke's brilliant penalty save, kicking two poor wides on the bounce. From then on in, it was all about seeing down the clock and picking up the pieces and looking forward to Cavan's visit to Castlebar in a fortnights time.