Mayo went down to a third league defeat of the season against a suffocating Cavan side in Castlebar on Sunday afternoon, the loss leaves them in the relegation scrap at the bottom of the table with tough encounters against Tyrone and Donegal up next on the horizon for them.

The defensive effort put in by Cavan, was the backbone of their win as they brought 13 and 14 men behind the ball throughout the game snuffing out Mayo’s attacking options with regularity.

In the middle of the park, Gearoid McKiernan and Tomas Corr were in top form for the visitors, where they got the better of Tom Pasons and Danny Kirby, despite the Castlebar man ending up with four points from play. It was a strange day where all but two of Mayo’s attacking six from midfield up registered scores, 13 in fact coming from them - but Cillian O’Connor was held scoreless by the Cavan defence and failed to even register a meaningful effort from play over the 70 odd minutes of the game.

Mayo opened the scoring six minutes in through a Tom Parsons effort that was worked right up the field from David Clarke to Donal Vaughan and on to Parsons in the middle of the park. The Charlestown man laid the ball off to Kevin McLoughlin and continued his run, picking the ball up from the Knockmore man again, before bustling his way through a few challenges and putting it over the bar. 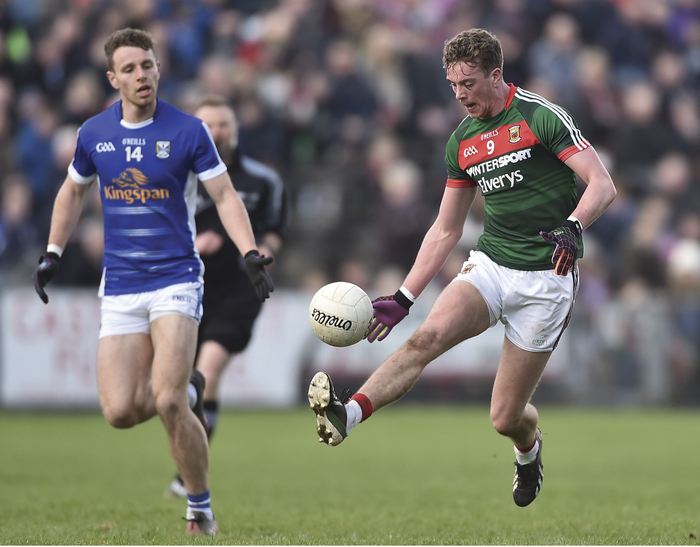 Andy Moran kicked Mayo’s second score of the game, right from the kick-out of the previous score intercepting Raymond Galligan’s restart and attempting to chip it over the Cavan custodian into the net, but it just carried over the bar. The visitors responded with a long range free from McKiernan on the ten minute mark to get their motors off and running.

Mayo pushed their lead back out to two points through a well taken Fergal Boland point from tight on the right hand side a minute later and just before the quarter of an hour mark, Danny Kirby hit the first of his four points, a fine effort from a very narrow angle on the stand side of the field. A second McKiernan point cut the gap back to two on 22 minutes, before Moran kicked his second of the day for Mayo after a smart cut back away from cover, to create the space for his shot.

The visitors first score from play came a minute later through Dara McVeety who from a tight spot near the touchline on the MacHale Road side of the ground split the posts. Kevin McLoughlin hit Mayo’s sixth point from a close in free not long after and then Conor O’Shea drove the ball over the bar from way out the park to stretch Mayo’s lead to four. McVeety responded with his second of the day from a similar distance for Cavan not long after, before Kirby split the posts again with a supreme effort from what looked an impossible spot and O’Shea fired over his second to put Mayo 0-9 to 0-5 up with not long left to go before the break.

However Cavan were to have the final say on the half when the hit the defining score of the contest. Killian Clarke won a mark from a kick-out and put in motion a move that ended up with Martin Reilly finding Conor Madden in behind the cover and the ball being worked to McKiernan who finished from close range to leave just one between the sides at the short whistle.

Mayo started the second half well with Kirby notching his third of the day seconds after the restart, but Cavan were about to dig in and show what they are made off and running off four points on the bounce without reply. 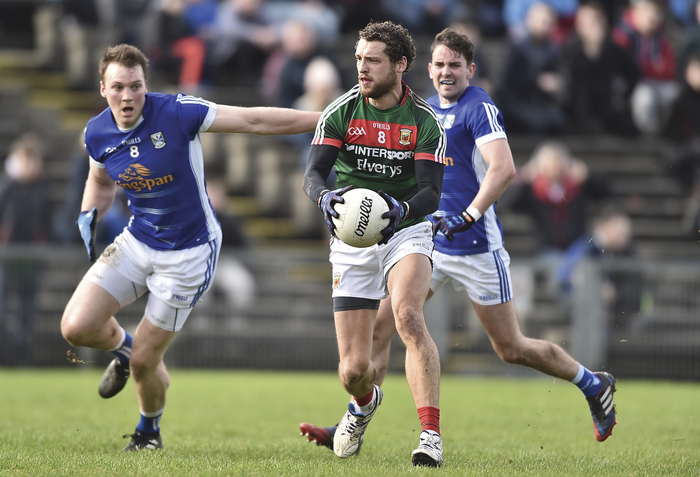 Rory Dunne slotted over a fine score on the run, then Conor Madden hit a score that came after Cavan went right through the heart of the Mayo defence. McKiernan added another as the Ulster sides work rate upped and Mayo began to flag. The scoring burst was finished off by a Tomas Corr point after Mayo were turned over in attack and Cavan broke with pace and power through the heart of the Mayo defence. Andy Moran drove over a long range effort to cut the gap back to one point, before Martin Reilly took advantage of slip in the Mayo rearguard to put his team two clear again, Reilly could have got in for a goal from that effort but opted to put it over the bar, rather than force the effort.

Mayo closed the gap back again with Kirby’s fourth point of the afternoon not long after and then Lee Keegan hit two monster scores from well out the field to nudge Mayo one clear again with 54 minutes gone. Corr’s second of the day had the game all tied up again with less than 15 minutes to to go as the atmosphere and tension ratcheted up in the ground. Mayo’s last score came from the boot of Shane Nally not long after the Garrymore man entered the field, but it was as good as it got for Mayo as points from first McKiernan, then McVeety who also had a goal disallowed near the end and sub John McCutcheon saw Cavan home and left Mayo with plenty to do over their last two league games.