In a year like no other, Mayo put in a performance far above anything they had been able to muster in their previous five outings in the league before the action was called to a halt in early Spring.

It was a surreal Tuam Stadium that Mayo made their way to on Sunday afternoon, every call for the ball and tackle echoed around the empty old ground where Mayo had tasted many painful defeats down the years in front of ravenous sets of supporters from both sides.

But the game behind closed doors, and with only a few spectators having a look for themselves from the Velux windows in the houses that back onto the far end of the ground, every call from the line and on the field was there to be heard by those who were there.

It was football - just not as we know it, but for Mayo it was football played at lighting pace and without fear or compromise as they tore into Galway from the get go. 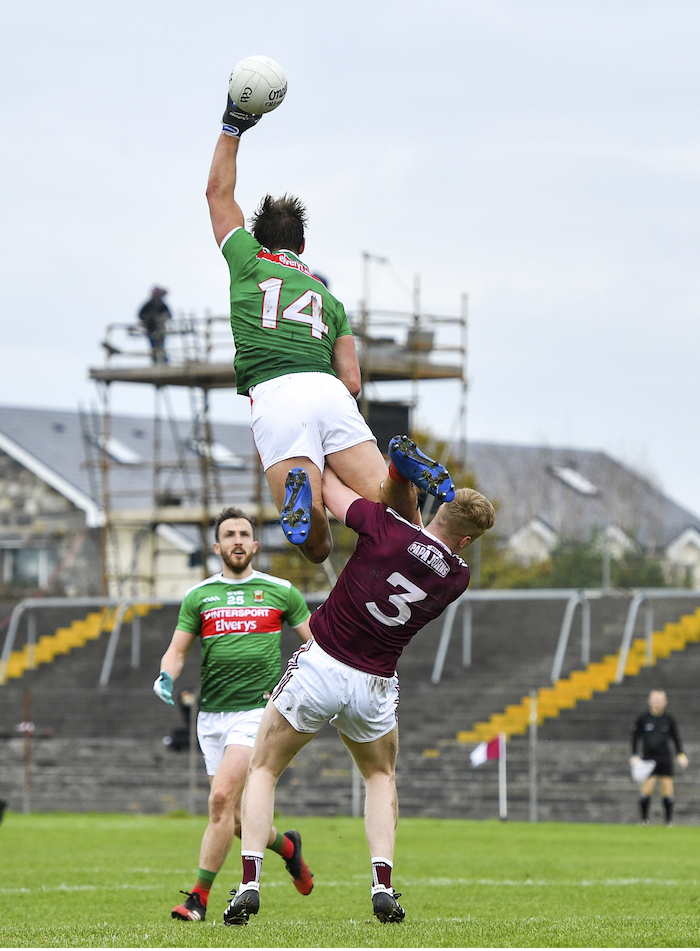 Nothing is surer to get Mayo minds focused more than the sight of a maroon and white jersey and they duly put Galway to a sword thanks to a stunning first half display - backboned by a particularly strong second quarter.

They went in leading 2-17 to 0-7 at the break, out-scoring their hosts 1-10 to 0-2 after the water break and had the result well put to bed before the second half even started.

James Horan gave debuts to Ballaghaderreen’s David McBrien and Westport’s Mark Moran in a youthful looking side with Moran putting in an eye catching display in the number eleven shirt.

Mayo hit their marks right from the off, but Galway were well off the pace in a game their manager Padraic Joyce described as “probably the most embracing day I’ve been involved with Galway in my career” afterwards.

Horan’s side lined out as selected with the only change to the personal coming on the bench with Tom Parsons dropping out being replaced by Chris Barrett - while Galway made one change from the team announced earlier in the week by Joyce with their talisman Damien Comer coming into the starting line-up for Michael Daly.

However Comer never got to influence the contest limping off with a hamstring injury three minutes into the game - by that stage Mayo were two points to the good with Conor Loftus who formed the midfield pair with Matthew Ruane hitting the first score of the day with Cillian O’Connor who was playing his 90th game between league can championship for the county getting the first of ten points he would register from his 55 minutes on the field.

With nine minutes gone Mayo were 0-5 to 0-1 in front Liam Silke getting the solitary Galway score in response to Mayo’s other efforts from another O’Connor free, a palmed effort from Aidan O’She and a Moran point.

All three men combined for Mayo’s first goal on 11 minutes, O’Shea played a deft ball into space in front of O’Connor who fisted the ball into the path of Moran who showed great composure to finish low to the back of Connor Gleesons’s net on the run.

Galway did look like they were going to make a game of it reeling off the next three points through three Paul Conroy points - two of them coming from play. But that was a brief respite for Galway as Mayo hassled and harried them in possession and then continued to pick them apart with some quick thinking foot passing and strong running from the back by the likes of Oisin Mullin.

Moran and Gary O’Donnell traded points before Stephen Coen wandered his way into the Galway defence and collected a mark he slotted over the bar to send Mayo in leading 1-7 to 0-5 at the first water break. 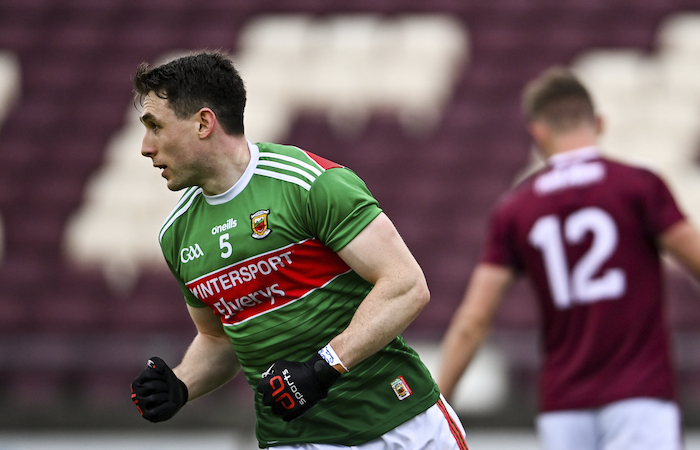 Back to work: Paddy Durcan celebrates his first half goal. Photo: Sportsfile

From the resumption of first half activities to the half-time whistle Mayo showed no compassion of their southern neighbours.

Aidan O’Shea and Cillian O’Connor were tormenting their full back line. Moran, Tommy Conroy, Eoghan McLaughlin, Paddy Durcan and Oisin Mullin drove at their defence at every opportunity as they put the squeeze on Galway in the most impressive of fashion.

O’Connor pointed a free after Liam Silke was penalised for playing the kick-out straight back to Gleeson, Tommy Conroy finished off a surging run with a good finish. Conor Lotus pointed a mark and on 28 minutes Paddy Durcan finished off a move that started when Stephen Coen blocked down a Galway pass and the ball was moved at breakneck speed down the left flank by Ruane and Mullin - before the ball was moved to O’Shea who picked out the Castlebar man breaking down the right wing and he drove the ball home to have Mayo 2-10 to 0-7 up.

Cillian O’Connor added five more points before the half time whistle - two of them coming inside a minute following sloppy play by the Galway defence. First up referee Maurice Deegan spotted Aidan O’Shea being fouled inside off the ball and O’Connor slotted over the free. Right from the restart O’Shea overturned a Galway defender and was fouled and O’Connor who made no mistake from the free.

The Ballintubber man kicked two more from play and another from a placed ball, with O’Shea and Conroy also getting scores from play to send Mayo in leading 2-17 to 0-7 at the short whistle and the points in the bag before they even had to change ends. 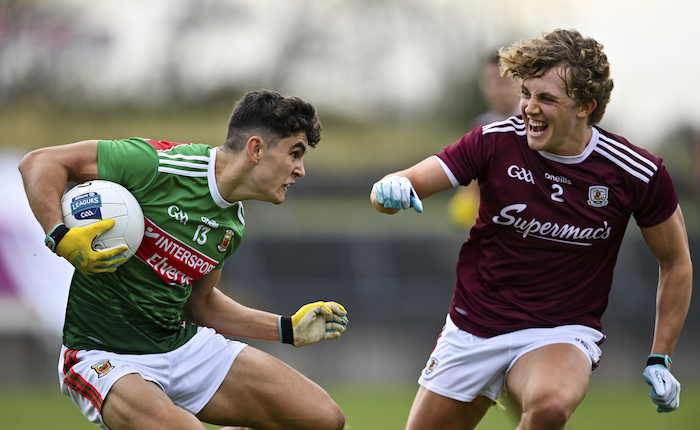 On the turn: Tommy Conroy looks to beat the tackle of Conor Campbell. Photo: Sportsfile

The second half was a far more mundane affair with Mayo tagging on 1-6 with Conor Loftus grabbing the third goal after he beat Gleeson to a dinked ball into the Galway full back line by Moran.

Mayo had done the damage in the first half and it was all bout seeing this one out until the end with a crunch game against Tyrone coming up next weekend and division one survival at stake for them.

The one thing they’ll be a little disappointed about is letting Galway kick ten points in the second half - but they had the job well and truly done in the opening 35 minutes.

It is only the first game back for these sides since March and with a potential championship clash coming up in the near future - they’ll both know things will be very different come championship.

But for Mayo this win combined with Donegal’s win over Tyrone in Ballybofey it leaves their league destiny in their own hands come next weekend when the Red Hand men come to Castlebar.

Win that game and they are safe - a draw and they are relying on a favour from an already relegated Meath in turning over Monaghan on the road and if they lose it’s division two for next year.

But it is at least in their own hands and that is all they would have been looking for going into this weekend.

Watch the Full-Time Highlights of Mayo v Galway in Round 6 of the Allianz Football League here on GAANOW!Full-Time Score:Mayo: 3-23Galway: 0-17 pic.twitter.com/UC2yGvF3Qv