Galway’s ability to cut take goal chances when they presented themselves was the decisive factor in this Connacht Ladies Senior Football Championship replay.

Mayo took the lead inside the opening minute with Grace Kelly pointing free after Roisin Durkin was fouled inside shooting distance. The lasted all of two minutes with Tracey Leonard arrowing the ball over the bar from a placed ball after Louise Ward’s progress was hualted illegally.

Rachel Kearns and Roisin Leonard exchanged pointed frees before the ten minute mark as both sides began to get their hair wet in the contest. 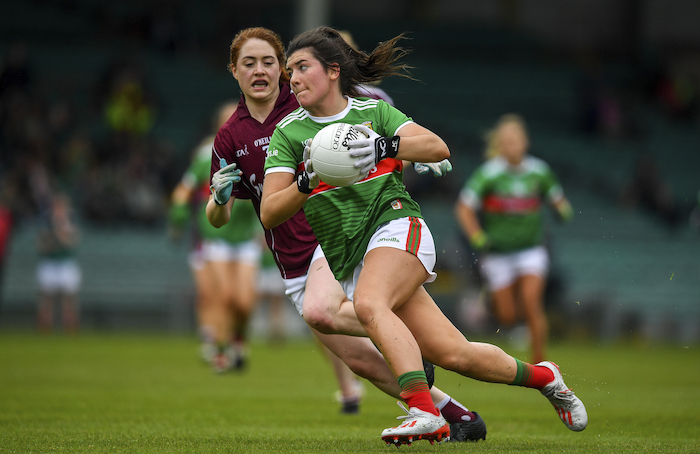 The first goal of the day arrived with 12 minutes lef in when Leonard was allowed to break through the Mayo defence far too easily and she fired it past Aishling Tarpey to put Galway three clear.

A minute later Roisin Lenoard landed Galway’s third point of the day, but the killer score came right from the next play – when Charlotte Cooney broke through the heart of the Mayo defence before she picked out Megan Glynn who hammered home her sides second goal.

Mayo did respond well before the break with Sarah Rowe kicking a brace of points from frees and Grace Kelly adding on another – they did have a goal chance right at the death before the short whistle.

Clodagh McManamon won the ball from a Galway kick-out and it was worked to Sinead Cafferkey who found Rowe, but her effort was well blocked by Lisa Murphy in the Galway goal – to send her side in leading 2-3 to 0-5 at the break. 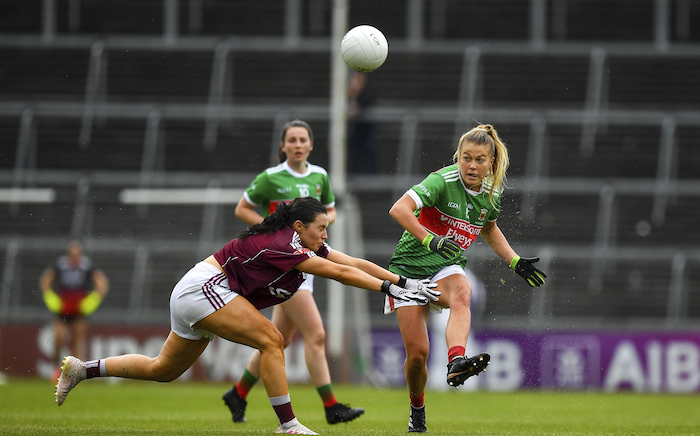 Pass and move: Sarah Rowe looks to spring a pass to get Mayo going. Photo: Sportsfile

Clodagh McManamon got Mayo moving on the scoreboard early in the second half with a well taken score from distance. That was responded to quickly by a Sarah Coneally point – before Sinead Cafferkey and Kelly kicked points for Mayo to put just two between the sides with Galway leading 2-4 to 0-8.

But that was to be the last time Mayo scored until almost the death of the game, the were also unable to take advantage of having an extra player for ten minutes after Aine McDonagh was sent to the sinbin for a sliding tackle on Niamh Kelly – shortly after Leonard’s second and Galway’s third goal with 17 minutes to go.