Sport is the great entertainment of the masses and Gaelic Football is the one that whets the appetite like no other on the west coast.

Nobody entertains like Mayo do – it might not be good for the heart – but it is far from boring when it comes to do or die in the championship.

For the first time in two decades Mayo and Galway met with it all on the line and no second chance to the vanquished and just like in Tuam Stadium in 1999 Mayo went home with glittering prize – this time a place in the Super 8s starting next Sunday in Killarney.

Watch all the Full-Time Highlights from Galway v Mayo here on GAANOW. pic.twitter.com/uydgfqdLj3

Even when it looked like it was done and dusted and Galway were down to 13 men (they finished with 12 ) Mayo still managed to find a way to let another plot twist throw the potential outcome of this game in different direction.

Mayo were leading by six and Galway were awarded a free on the Mayo 21 meter line, Shane Walsh stood over it and while most would have blasted with as much power as they could at the target, the Galway number 11 drove it hard and true to the bottom corner of the net catching the Mayo rearguard out– and time still to go.

Boyle on the ball: Colm Boyle dives to win the ball ahead of Michael Daly. Photo: Sportsfile

In reality Mayo should have won this game by more than the three they did – they did have a major wobble in the middle third where they seemed to forget their lines and all they had been doing right in the early stages of the game and let Galway back into it, they then appeared to have gotten over than tricky patch – but that’s not the Mayo way is it.

There were plenty of performances that deserve praise – Colm Boyle swept up in front of his last line of defence in an all action performance like no other can deliver. Cillian O’Connor stepped back into his leading role with ease and kicked half a dozen points, Darren Coen continued his impressive return to the main stage and James Carr laid down his credentials for best newcomer in scoring two first half goals to set up the win.

The big news before the game was the Lee Keegan was fit enough to take his place on the bench and play a major role in the closing few minutes of the contest despite limping out against Armagh last week.

James Horan also made two changes to the team announced on Friday night with Donal Vaughan and James Carr coming into the starting side in place of Michael Plunkett and Ciaran Treacy and Ardagh man took his chance with more than a bit of style. 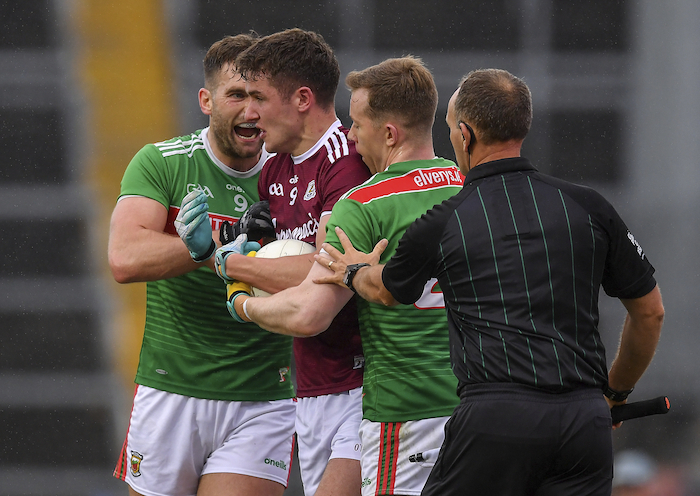 No holding back: Aidan O'Shea and Donal Vaughan get up close and personal with Michael Daly. Photo: Sportsfile

Cillian O’Connor got the scoreboard moving inside a minute when he flicked over a free after Darren Coen was fouled, Kevin McLoughlin put Mayo two clear a minute later.

With six minutes gone Mayo hit the first fatal blow in Galway’s challenge when a Coen effort dropped short and was spilled by Bernard Power, Carr was lurking and he reacted quickest to drive it to the back of the net.

Galway responded through points from Gary O’Donnell and Peter Cooke inside the next two minutes – but just before the tenth minute had slipped by Carr slalomed by three Galway defenders and hammered the ball home past Power to put Mayo 2-2 to 0-2 ahead and looking good to point the bus towards Killarney next Sunday.

O’Connor kicked three more points with Cooke hitting one in response for Kevin Walsh’s side to have Mayo eight clear with ten minutes to go before the break. Galway did close the gap back to six by the interval with Cillian McDaid, Cooke and Shane Walsh raising the white flag – but the final act of the half was left to Darren Coen whose radar had been off with a few efforts earlier on finding his range with a sweet score – to sent Mayo in leading 2-7 to 0-7 at the short whistle.

Coen repeated the trick with the first score of the second half – that had started with a major cheer from the Galway faithful after Damien Comer was introduced for his first appearance in Maroon and white since last year’s All Ireland semi-final defeat to Dublin.

Stephen Coen put Mayo eight clear again with a well executed finish after some neat interplay in the build up. Shane Walsh drove over free from beyond the 45 meter line to get Galway’s first score of the half on 40 minutes.

Jason Doherty kicked Mayo’s tenth point of the day on the three-quarter of an hour mark to put Mayo 2-10 to 0-8 ahead and looking good to drive on from there.

But Galway were about to hit a purple patch to keep themselves in with a punchers chance, Michael Daly landed a point – then Ian Burke was upended by Chris Barrett after he collected a ball flicked down to him by Comer and Galway were awarded a spot kick. 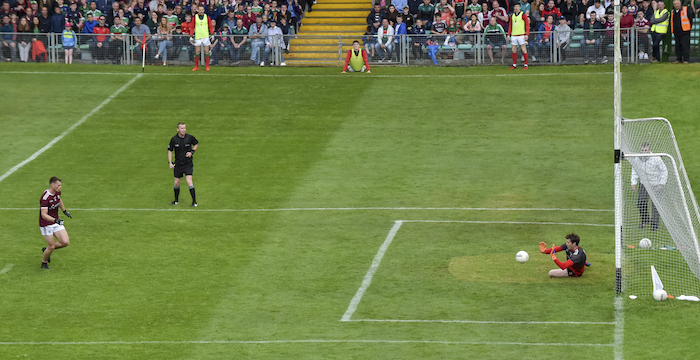 Liam Silke stepped up to take it – but David Clarke down low to his left hand side and put it out for a 45 which was converted by Walsh. Eamonn Brannigan kicked his second of the day not long after and there was just four between the teams – then with nine minutes to go Kieran Molloy pointed with almost his first action in the game after coming on and the gap was just three points and the Mayo fans were on the edge of their seats.

Darren Coen calmed them with his third of the day from the next play, O’Connor slotted over a free and Donal Vaughan hooked one over the bar after chasing in on a ball in from Ciaran Treacy and it looked once again like it was job done – but there was still another twist and turn left in this particular tale.

Mayo held on and all roads lead south once again this time to Killarney and the Super 8s, the summer will have at least three more outings for the Mayo faithful and who knows what they’ll hold in store.