Mayo are in the hat for Monday’s last round of the qualifiers draw - but their injury concerns continue to pile up with Lee Keegan and Jason Doherty both forced out of their nerve wracking win over Armagh with injuries.

Keegan’s injury will be a serious concern ahead of next weekend as the Westport man had to be helped from their field and left the ground on crutches with his ankle in a protective boot ahead of a fuller examination.

The game went right down to the wire despite Mayo looking at least twice to have held of Armaghs brave fight - Armagh trailed by the bare minimum at the death and were awarded a free over 50 meters out - they played the ball short and it was worked to Niall Grimley who took on the responsibility but his effort trailed wide of the target and the brought the game to an end.

Check out the best of the action from a great game between @MayoGAA and @Armagh_GAA here: pic.twitter.com/YXVKBJJbul

Mayo led by a single point at the break at the end of a half that saw both sides hit the back of the net. Armagh hit the first goal of the game five minutes in when Rian O’Neill was on hand to finish calmly after some neat interplay between Jamie Clarke and Aidan Nugent after Keith Higgins failed to hold onto a ball he had intercepted.

Mayo’s response was swift and clinical - Aidan O’Shea found Andy Moran inside the cover, Moran held on to the ball at the second time of asking and found Fionn McDonagh who rifled the ball low Blaine Huge to tie the game up at 1-1 each, with Conor Loftus and Rory Grugen getting the opening points for their sides.

The points went tit for tat over the next 19 minutes, with Armagh leading 1-5 to 1-4 on 24 minutes but two late first half points from Mayo from Patrick Durcan and Jason Doherty saw them go into the break leading by the bare minimum.

The second half started off in a similar vein with both sides exchanging points, with both Darren Coen and Jamie Clarke putting on an exhibition of point taking for their sides. The vital score of the day came with 19 minutes left in normal time - Kevin McLouhglin darted through the heart of the Armagh defence and he clipped the ball over Hughes to the back of the net and put May 2-10 to 1-9 up - another Coen special stretched that lead out fo five points three minutes later and it looked like Mayo were home and hosed. 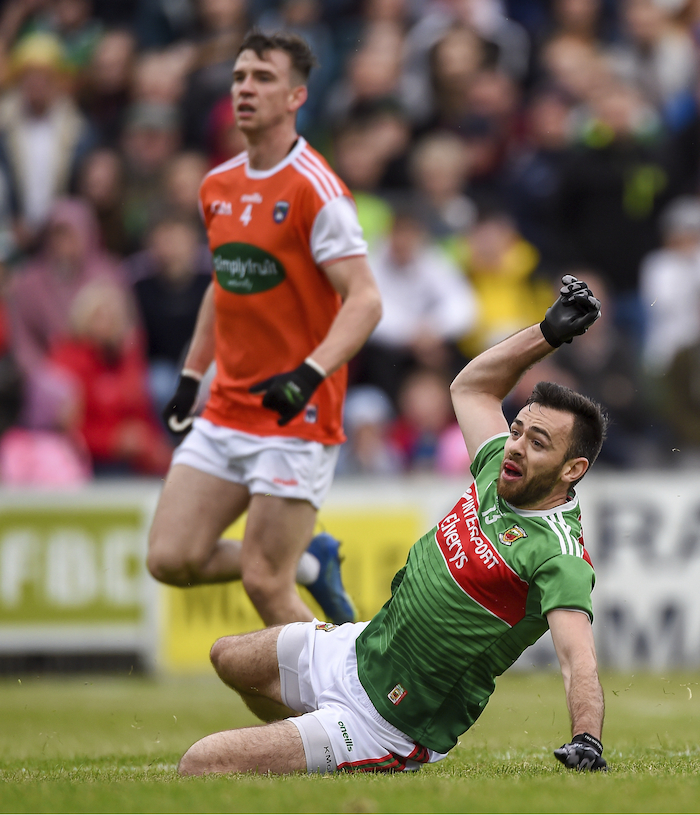 Back of the net: Kevin McLoughlin watches his goal hit the back of  the net. Photo: Sportsifle

But that’s not the Mayo way - Armagh flew back into Mayo, Clarke cut it back to four points with another fine score and then Grugen got to bring it back to a three point game with ten minutes left on the clock - a minute later and there were just two points between the sides when Stefan Campbell made Mayo pay after Stephen Coen was isolated and turned over and it was game on once more.

The same man kicked another point three minutes later and there was just one between the teams and the nerves were starting to kick in. Cillian O’Connor did his best to calm those with two pointed frees in the 66th and 69th mintue to put a goal between the sides.

Armagh weren’t going to bend the knee that easily though and Rian O’Neill pointed a free and Campbell added his fourth of the day and there was just one it and still drama to come.