Mayo will head to Limerick for the second time in as many years in the All Ireland Qualifier series - this time to face Galway with a place in the Super 8s up for grabs.

The draw for the last round of the qualifiers pitted the two sides against each other when they were the last two teams pulled out of the hat. It will be the first time that teams met in the championship where the loser will be eliminated since 1999 - when Mayo beat Galway 1-14 to 1-10 in Tuam Stadium in the Connacht Final in a game that saw current Mayo manger James Horan score five points from play.

The decision to fix the game in the Munster venue came about according to the GAA because: "Efforts to fix the Galway-Mayo game for a Connacht venue were not feasible as there was no agreement between the counties to toss for home advantage, and there was no other Connacht venue deemed capable of catering for the expected interest in the tie. Both counties were consulted and agreed to the Limerick venue which has a capacity of 43,000 with 20,000 seats."

The game will throw in at 7pm and will be televised live by Sky Sports and will be preceded by the replay of the Connacht Ladies Football Final between the same two sides, with that game getting underway at 4pm. 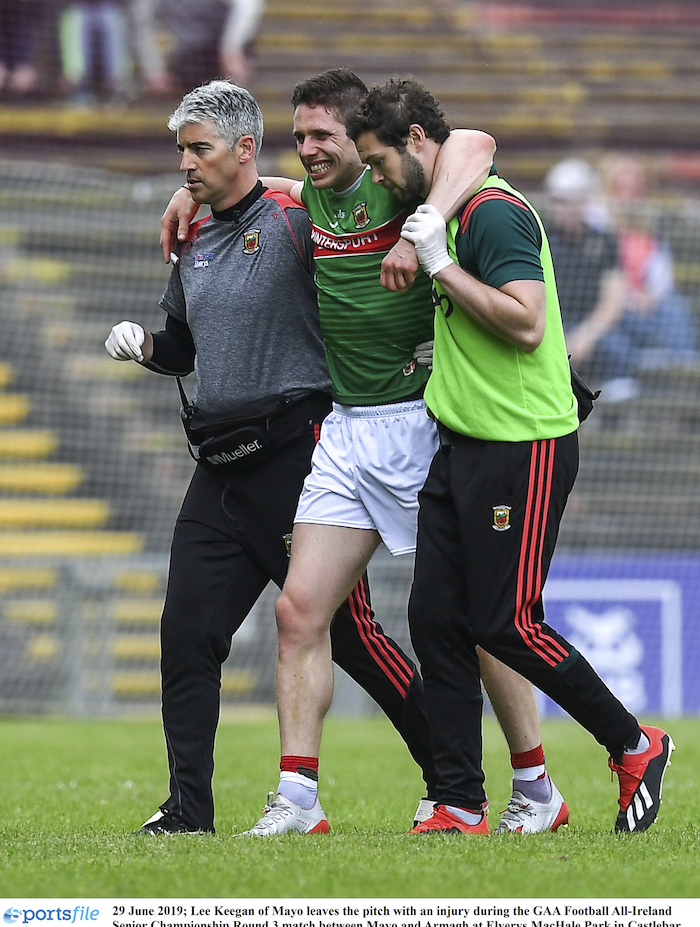 Helping hand: Lee Keegan is helped from the field after picking up an injury on Saturday night. Photo: Sportsfile

"Both players were immediately assessed by the Mayo Senior medical team and they are now working on their rehab programmes. As with any injury or medical intervention the privacy and confidentiality from a medical perspective is important for the players in allowing them the time for a full recovery. We will monitor their progress closely over the coming weeks."

This mornings draw also confirmed the group that Mayo will be placed in if they win on Saturday in the Super 8s. If they win they will be in group one alongside Munster champions Kerry, Ulster champions Donegal and the winner of the qualifier game between Meath and Clare.

It is a busy weekend for Mayo GAA with both the mens and ladies senior sides in championship action before that the Mayo u20s will open their Connacht championship campaign at home to Sligo on Wednesday evening at 7.30pm - then on Friday evening the Mayo minors will be in action in the Connacht final when they take on Galway in Tuam Stadium at 7.30pm.